In six innings of work, Hee held Waipio to five hits, while striking out five. Waipio was eliminated after dropping their second game in the double elimination format championship tournament.

Pearl City continues to work their way through the loser's bracket and will face MKH today at 12:00pm. The winner will take on undefeated Nanakuli on Tuesday. MKH stopped Pearl City 11-1 this past Thursday. MKH lost to Nanakuli 4-1 on Friday.

On Sunday, the Waipio vs. Pearl City match up was filled with all the high drama that usually manifests itself when the two teams come together in summer all star tournament play. Both sides fought hard for the lead with Pearl City coming out ahead in the bottom of the fifth inning on a game winning RBI single by Christian Pacrem that drove in teammate Christian Onomura to break a 4-4 tie.

Waipio made it interesting scoring three runs in the top of the fifth inning highlighted by Antonio Omphroy's 2-RBI double that tied the game 4-4.

Pearl City's Brannon Liu homered for the second game in a row and Nohea Hee proved to be the difference once again from the hill.

Jordan "Spike" Donahue led off the top of the first inning with walk. Next batter Matt Aribal hit a grounder that forced out Donahue at second base. Shayden Kubo drove in Aribal for the first run of the ball game. Waipio led 1-0.

In the bottom of the first inning Brannon Liu tied the game with a solo homerun over the center field fence. It was Liu's second homerun of the tournament. Liu blasted a 3-run homerun in Friday's 7-1 win over Ewa.

Sam Prentice flied out to lead off the inning. Carter Hirano grounded out for out number two. Brannon Liu hit a two out double down the right field line. Next batter Davin Kapuras hit an RBI single to center field scoring Liu from second base. Matthew Valencia came in to pinch run for Kapuras. Valencia moved to second base on a pass ball at home plate. Next batter Alihikaua Rodrigues walked. Waipio made a pitching change bringing in Jacob "Toto" Yoshino in relief of starter Logan Yee. Valencia advanced to third base on a pass ball at the plate. Next batter Nomura grounded out to second base for the third out. Pearl City left two runners on base and now led Waipio 1-1 after four complete innings.

In the top of the fifth inning, Waipio would mount a 3-run rally that tied the game at 4-4. Pearl City starting pitcher Nohea Hee got the first batter on strikes. Cale Yoshino got on base with a single. Dillon Gabriel hit a grounder and made it to first base on a bad throw to the bag. Yoshino scored all the way from first base on the play. Chase Ling flied out for out number two. Hee walked Jordan Donahue. Next batter Antonio Omphroy hit a two RBI double to right field that scored Gabriel and Donahue to tie the game at 4-4. Hee struck out the next batter to end the inning. Waipio left one runner on base.

Christian Onomura reached first base on a bunt attempt and wild throw to first base. Onomura would advance to third base. Nohea Hee grounded out for out number one. Christian Pacrem stepped up to the plate and hit an RBI single that knocked in Onomura from third base for the go ahead run. Darian Obara came in to pinch run for Pacrem. Next batter Sam Prentice grounded out for the second out. Carter Hirano followed with a pop out to right field for the third out. Pearl City left one runner on base. Pearl City took a 5-4 lead into the top of the sixth inning.

Hee would put Waipio down Waipio batters in order in the top of the sixth inning for the 5-4 win. 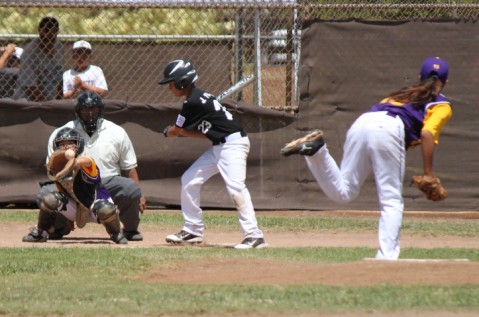 Nohea Hee strikes out the final batter of the ball game in the top of the sixth inning to earn the win and advance her team into Monday's match up against MKH. Darian Obara is pictured behind the plate for Pearl City with Waipio's Jacob Yoshino at bat. 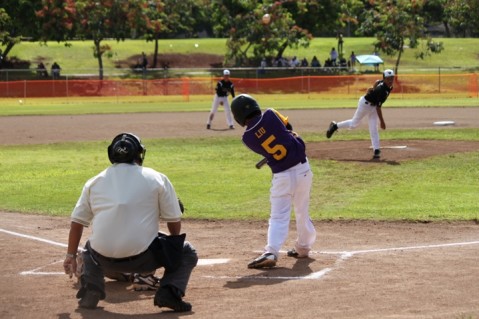 Brannon Liu connects with a solo homerun off of Waipio starting pitcher Logan Yee in the bottom of the first inning that tied the game at 1-1. 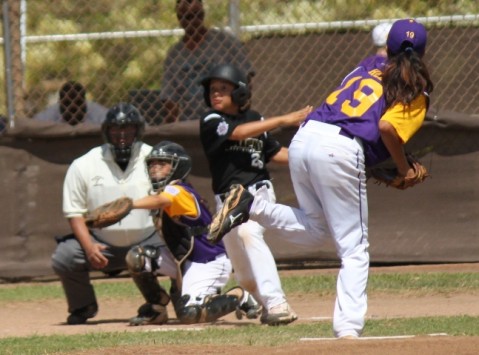 Antonio Omphroy pictured hitting an RBI double that scored Dillon Gabriel and Jordan Donahue to tie the game at 4-4 in the top of the fifth inning. 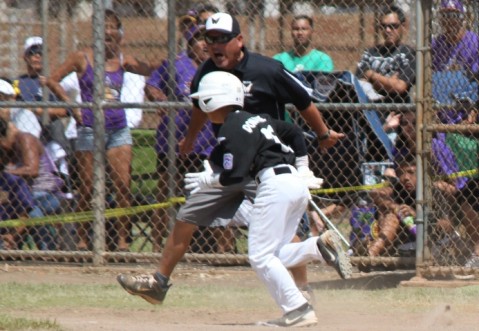 Coach Donahue guides Jordan Donahue around third base and towards home in the top of the fifth inning. 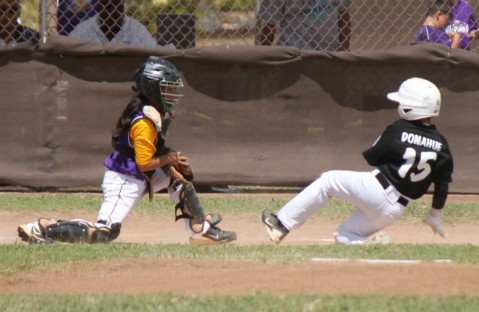 Jordan Donahue slides into Pearl City catcher Darian Obara to tie the game at 4-4. Donahue scored on a 2-RBI double by Antonio Omphroy in the top of the fifth inning. 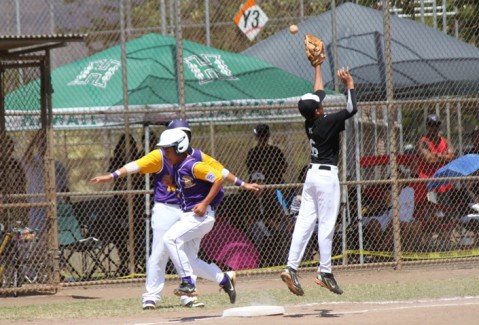 Christian Onomura reaches first base on a high throw to the bag in the bottom of the fifth inning. Onomura would score the winning run from third base on an RBI single by Christian Pacrem. 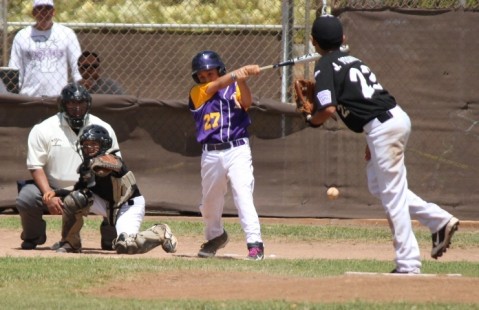 Christian Pacrem drills a game winning RBI single off of Waipio relief pitcher Jacob Yoshino that scored Christian Onomura from third base in the bottom of the fifth inning. 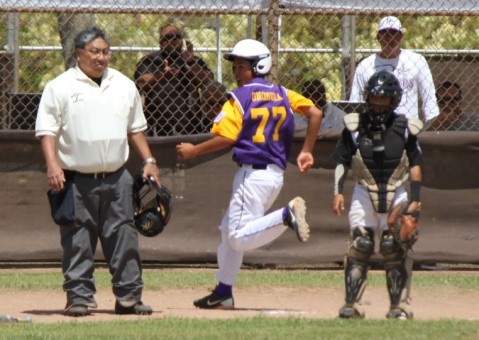