MKH eliminated Pearl City from from the District 7 Majors Hawaii Little League Tournament on Monday with a 4-2 win at Central Oahu Regional Park in Waipio.

It was the second meeting between the two ball clubs in the tournament with MKH sweeping Pearl City 11-1 and 4-2. Monday's contest was a lot closer than the first that ended via the 10-run mercy rule.

MKH scored two runs each in the bottom of the first and second innings to take an early 4-0 lead. Pearl City shut down MKH the rest of the way. Pearl City scored single runs in the top of the third and fifth innings.

Both sides showed their talent and power at the plate. Keith Torres belted a 2-run homer in the bottom of the first inning to put MKH up 2-0. Carter Hirano and Jerick "Juice" Nomura hit a triple each in the top of the fifth inniing. Nomura drove in Hirano from third base with his triple to close to within two runs of MKH at 4-2.

Keith Torres belted a 2-run homerun with one out in the bottom of the first inning driving in Garrett Wong to take an early 2-0 lead after one complete inning, MKH would leave the bases loaded to end the inning.

Chance Beyer hit a one out single to left field. Next batter Keith Torres hit a single putting runners on first and second. Chanson Aki grounded out advancing the runners to second and third. Jacob Filio ripped a two out 2-RBI single that scored Beyer and Torres. Next batter Hunter Breault flied out center field for the third out.

Sam Prentice led off the inning with a base hit to center field. Davin Kapuras followed with a pop out to the second baseman. Prentice was forced out at second base on bunt by Brannon Liu. Carter Hirano hit a two out bloop single to center field that advanced Liu to second base in scoring position. Andrei Stoyanow walked Alihikaua Rodrigues to load the bases. Stoyanow entered the game in the top of the first inning in relief of Hunter Breault. Stoyanow was relieved by Chanson Aki after walking Rodrigues. Next batter Jerick Nomura hit an RBI single scoring Liu from third base. Aki struck out Caleb Young with the bases loaded to end the inning. Pearl City trailed MKH 4-1.

Carter Hirano got things going in the top of the fifth inning after drilling a triple to right field with one out. Next batter Jzayven Moreno flied out for the second out. Next batter Jerick "Juice" Nomura stroked an RBI triple to right field that scored Hirano from third base. Nohea Hee grounded out for the third out leaving Nomura on third base. 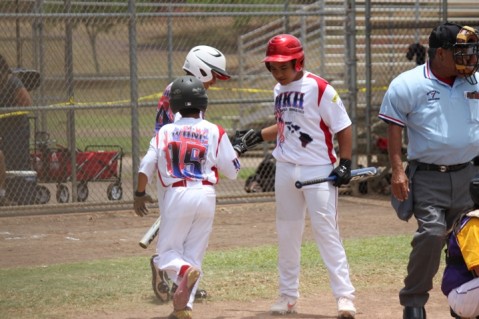 Chanson Aki (right) congratulates teammates Garrett Wong and Keith Torres after Torres hit a 2-run homerun in the bottom of the first inning to give MKH an early 2-0 lead over Pearl City. 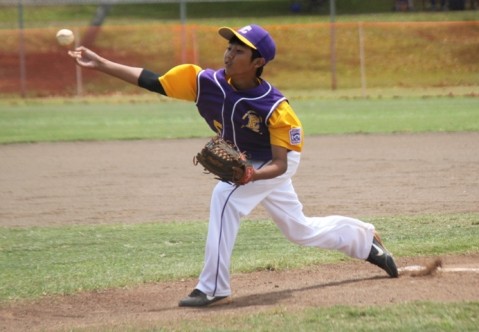 Brannon Liu started on the mound for Pearl City. 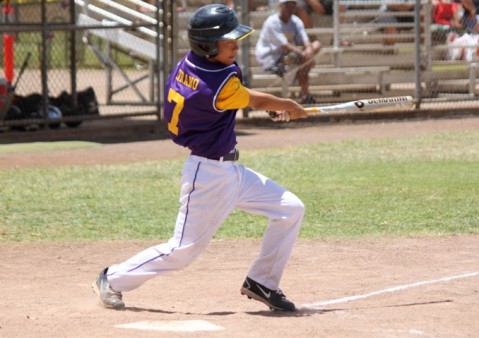 Carter Hirano hits a triple in the top of the fifth inning. Hirano would later score on an RBI triple by Jerick "Juice" Nomura. 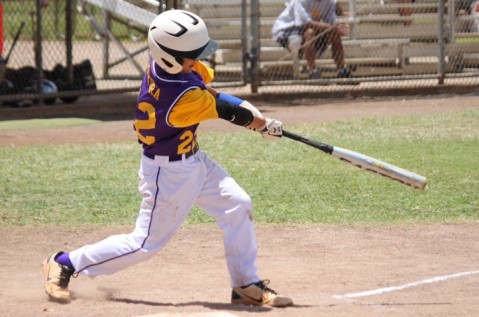 "Juice" Nomura drills an RBI single that scored Carter Hirano from third base in the top of the fifth inning. Nomura's hit moved Pearl City within two runs of MKH at 4-2. 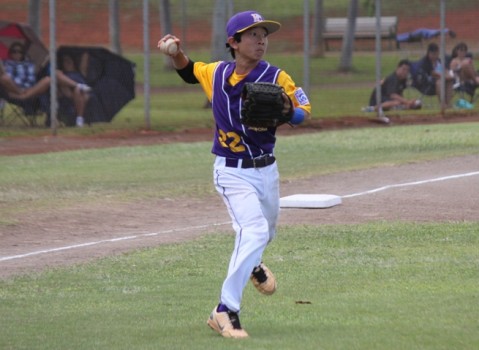 "Juice" Nomura also showed off his arm strength from his third base position against MKH. Nomura pictured here gunning down a base runner at first base in the bottom of fourth inning.

Chanson Aki worked innings 3-6 in relief against Pearl City. Aki pictured here on the mound in the top of third inning.

MKH defeated previously undefeated Nanakuli on Tuesday (7/10) and will play for the championship on Wednesday (7/11) at Central Oahu Regional Park (CORP). First pitch is set for 6:00pm.