Pearl City was eliminated from the tournament finishing with a 2-2 record. Kawaihau moves on to play MKH (Makakilo, Kapolei, Honokai Hale) today at 4:00pm. Kawaihau (3-1) will be tasked at beating MKH (3-0) twice for the championship. Kawaihau lost to MKH on Sunday to drop into the loser's bracket of the double elimination tournament.

On Tuesday, Oshima was the master on the mound holding down the Pearl City in the batter box and scoreboard. Oshima also hit 3-4 and scored four runs.

Cade Halemanu got Kawaihau on the scoreboard early in the game with a three-run homerun shot to left-center field in the top of the first inning.

Tarynce Antolin drove in both of Pearl City's runs on a two-run homerun in the bottom of the first inning.

Tyler Oshima led off the inning with a single into left field off of Pearl City starting pitcher Michael Englar. Next batter Braden Watanabe walked putting runners on first and second. Runners advanced to second and third on a pass ball at the plate. Cade Halemanu stepped up to the plate and powered a three-run homerun over the left-center field fence driving in Oshima and Watanabe. The next three Kawaihau batters went down 1, 2, 3 to end the inning with Kawaihau up 3-0.

In the bottom of the first inning Pearl City answered back with a two-run homerun to left field with one out by Tarynce Antolin that drove in Cello Casarez to close to within one run of Kawaihau at 3-2. Michael Englar and Carter Ogino hit deep drives to center field that were caught for the final two outs of the inning.

Kawaihau came back to score three runs in the top of the second inning to take a 6-2 lead. Kaenan Lacaden scored the first run on a base hit to right field by Braden Watanabe. Tyler Oshima moved up to third base in scoring position. Watanabe made it second base. Pearl City made a pitching change bringing in Tarynce Antolin in relief of Englar with two outs and two runners on base. Next batter Cade Halemanu hit an RBI single to left field driving Oshima from third base for the second run of the inning. Leo Swartman hit an RBI single to left field scoring Watanabe from third base. Zachary Hee grounded out for the third out.

Tyler Oshima led off the inning with a double to left-center field. Oshima advanced to third base on a pass ball at the plate. Kystin Alfiler lined out to Cole Miyamura at second base for the first out of the inning. Cade Halemanu walked. Next batter Leo Swartman hit an RBI single scoring Oshima from third. Zachary Hee got hit by a pitch to load the bases. Antolin walked Elvis Park scoring Halemanu from third base. Pearl City made a pitching change bringing in Champ Smith in relief of Antolin with the bases loaded and two outs. Smith struck out Raven Cummings to end the inning leaving the bases loaded. Kawaihau took a 8-2 lead heading to the bottom of the fourth inning.

In the top of the fifth inning Kawaihau continued to pad their lead scoring three more runs to go up 11-2. Tyler Oshima got things going with a single to right-center field. Braden Watanabe hit a liner that bounced off Cello Casarez at third base and made its way into left field. Kawaihau had runners on first and second with one out. The runners moved up to second and third on a pass ball at the plate. Cade Halemanu hit an RBI single to center field scoring Oshima from third. Leo Swartman followed with an RBI single that scored Watanabe from third base. Zachary Hee walked to load the bases. Elvis Park got hit by a pitch scoring Halemanu from third base. Raven Cummings hit into a double play to end the inning. Kawaihau went up 11-2 which would stand as the final score. 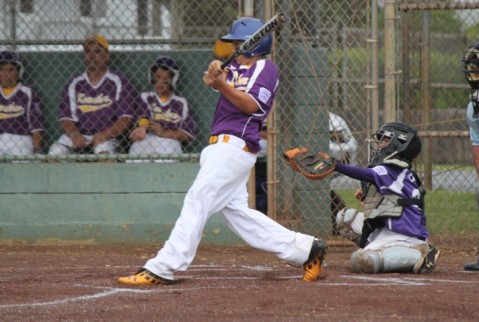 Cade Halemanu launches a three-run home run over the left-center field fence in the top of the first inning to put Kawaihau up 3-0 over Pearl City. 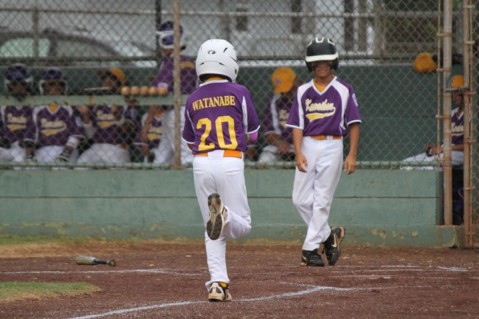 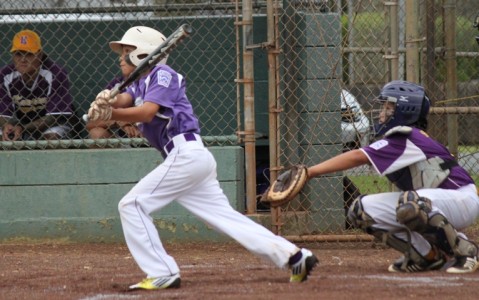 Tarynce Antolin blasts a two-run homerun over the left field fence in the bottom of the first inning scoring Cello Casarez to close within one run of Kawaihau at 3-2. 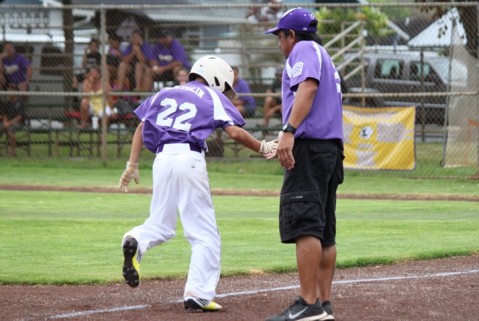 Antolin is congratulated by Coach Casarez as he rounds third base and heads home.