Staying alive in double elimination tournament play isn't an easy task if you're forced to take the road through the loser's bracket. Pearl City shook off Friday's 3-2 loss to Aiea with an 11-5 win over Hilo on Saturday in the 2012 Hawaii State Little League Juniors Championship Tournament played at the Halawa Recreation Center Field. Hilo was eliminated from the championship tournament with the loss to Pearl City.

The Pearl City advanced to a rematch with Aiea that followed thirty minutes after their win over Hilo. Inclement weather that earlier threatened the Pearl City/Hilo game, caused the suspension of the Aiea/Pearl City game in the top of the fifth inning as steady rain fell upon the ball field. The game was suspended with the home team, Pearl City at bat with the bases loaded and two outs. The game will resume today at 9:00am. The winner will face Maui who beat Aiea on Saturday in the first game of a tripleheader. Maui is undefeated at 2-0 and sits in the driver’s seat with the fresh arms and the luxury of having two chances to win one game against the winner of the Pearl City/ Aiea game for the state championship title. Pearl City or Aiea will be challenged to beat Maui twice to claim the title. The championship game will follow the Pearl City/ Aiea match up.

Pearl City's Matt Yokota made the highlight reel with a two-run homerun blast over the left field fence in the bottom of the second inning that scored Lawson Faria. Yokota's homerun gave Pearl City a 2-1 lead.

Colby Hirano burned up the base paths recording six stolen bases in the ball game.

Nick Au got the start for Pearl City with Colby Hirano and Kawaiola Takemura in relief.

Hilo ace Tryson Kenui got the start followed by Bryce Yamashita and Makoa Andres in relief.

Gehrig Octavio led of the top of the first inning with a single and advanced to second base on the play. Daylen Calicdan grounded out for the first out. Octavio moved up to third base. Next batter Russell "RJ" Ragual Jr. powered a one out double over the center fielder scoring Octavio from third base for the first run of the ball game. Taylor Mondina grounded out for the second out. Noah Higa-Gonsalves lined out to first base for the third out to end the inning.

Lawson Faria walked to lead off the bottom of the second inning. Next batter Matt Yokota blasted a two-run homerun over the left field fence that scored Faria and put Pearl City up 2-1. Tyler Tashiro lined out to the pitcher for the first out. Trestan Nakamura walked. Nick Au hit into a double play to end the inning.

Hilo put together a four run rally in the top of the third inning to take a 5-2 lead. Gehrig Octavio got things started after being walked with one out. Daylen Calicdan hit a grounder that was fielded by the pitcher and thrown away first base. Calicdan made it to second and Octavio advanced to third on the play. Russell Ragual Jr. walked to load the bases with one out. Next batter Taylor Mondina hit an RBI sac fly to left field scoring Octavio from third base to tie the game at 2-2. Calicdan and Ragual moved up to second and third. Noah Higa-Gonsalves hit a fly ball to right field that was dropped scoring Calicdan and Ragual. Hilo took a 4-2 lead. Higa-Gonsalves advanced to third base on a pass ball at the plate and would score on a wild throw by the catcher to third base. Hilo went up 5-2. Makoa Andres walked. Next batter struck out for the third out.

Pearl City put across six runs on four hits to regain the lead at 8-5 in the bottom of the third inning. Chandler Ganoot grounded out for the first out of the inning. Next batter Colby Hirano walked. Hirano stole both second and third base. Kawaiola Takemura walked. Sanyo Lo stroked a one out RBI single scoring Hirano from third. Micah Balderas came into the game as a special pinch runner for Lo at first base.  Next batter Lawson Faria flied out to right field for the second out. The runners moved up to second and third on a pass ball at the plate. Matt Yokota walked to load the bases. Tyler Tashiro stroked a two RBI double scoring Takemura and Balderas to tie the game at 5-5. Makoa Mau hit an RBI single to right field scoring Yokota from third. Pearl City went in front of Hilo 6-5. Mau advanced to second base putting runners on second and third. Nick Au hit a two-RBI single that dropped into shallow center field scoring Tashiro and Mau. Pearl City increased their lead to 8-5. Hilo made a pitching change bringing in Bryce Yamashita in relief of Tryson Kenui with one runner on base and two outs. Next batter Ty Kurata flied out for the third out to end the inning.

Colby Hirano walked to lead off the bottom of the fourth inning. Hirano made it to second on a steal. Kawaiola Takemura got on first base with a single. Hirano advanced to third base on the play. Hilo made a pitching change bringing in Makoa Andres in relief of Bryce Yamashita. Takemura made it to second base. Next batter Sanyo Lo ripped an RBI single scoring Hirano from third. Takemura got tagged out at home plate trying to score from third base. Lo made it to second base on the play. Pearl City took a 9-5 lead. Lo made it to third base on a steal. Lawson Faria walked with one out. Faria reached second on a steal. Next batter Matt Yokota struck out for the second out. Tyler Tashiro got hit by a pitch to load the bases. Makoa Mau walked scoring Lo from third base. Pearl City led Hilo 10-5. Next batter Nick Au flied out for the third out leaving the bases loaded.

Colby Hirano got on first base with a one out single. Hirano advanced to second base on a steal. It was Hirano's sixth stolen base of the ball game. Kawaiola Takemura grounded out for the second out. Hirano reached third base on a pass ball at the plate. Sanyo Lo hit an RBI single driving in Hirano from third base. Ethan Momohara grounded out for the third out. Pearl City went up 11-5 which would stand as the final score. 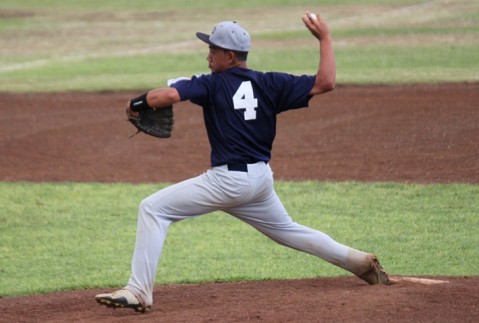 Tryson Kenui got the start for Hilo. Kenui pictured on the mound in the bottom of the third inning. 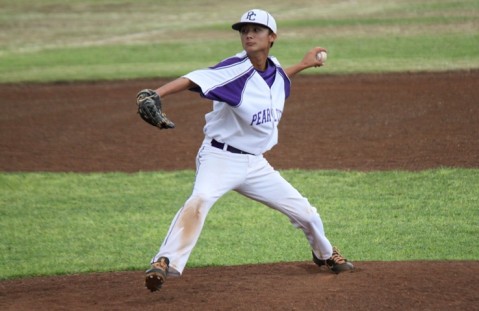 Nick Au got the call and the start for Pearl City against Hilo. Au pictured on the hill in the top of the third inning. 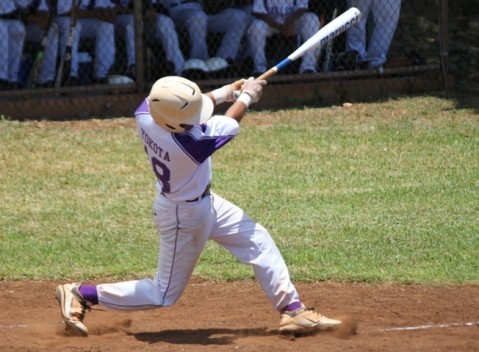 Matt Yokota blasts a two-run homerun over the left field fence scoring Lawson Faria in the bottom of the second inning. Pearl City took a 2-1 lead over Hilo. 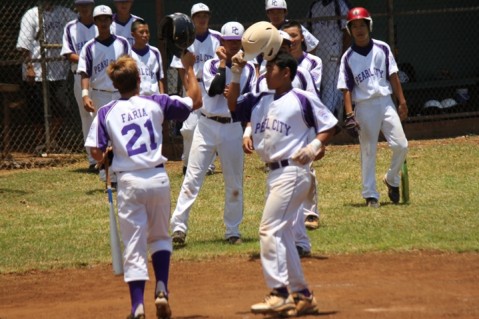 Lawson Faria and Matt Yokota meet and home plate after scoring on Yokota's two-run homerun in the bottom of the second inning. 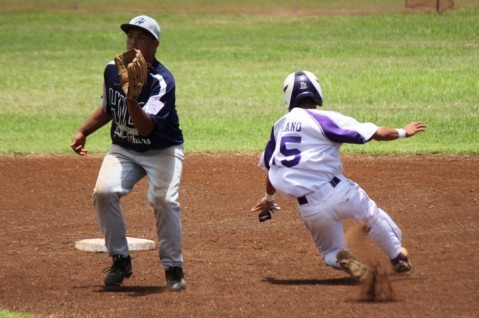 Colby Hirano steals second base in the bottom of the first inning. Hirano recorded six stolen bases against Hilo. 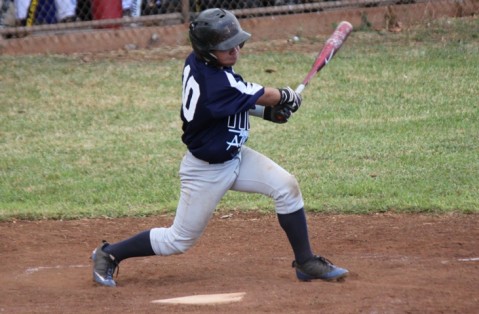 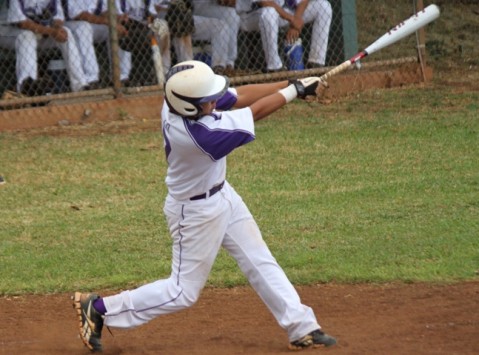 Sanyo Lo hits an RBI single in the bottom of the fourth inning scoring Colby Hirano from third base. 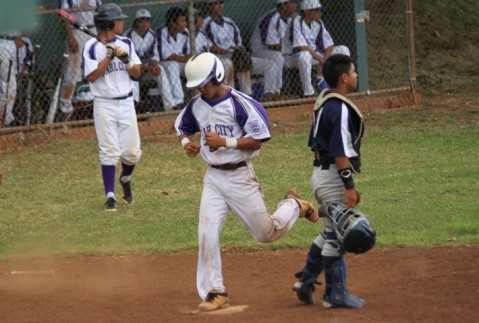 Colby Hirano steps on home plate scoring on Sanyo Lo's RBI single in the bottom of the fourth inning.