Lui-Yuen dominated the airwaves completing 17 of 30 passes for 274 yards and three touchdowns which included a 75 yard touchdown strike to Jameson Pasigan in the first quarter to give the Rams an early 6-0. Lui-Yuen also connected with Pasigan on a 25 yard third quarter touchdown reception that put the Rams up 27-0. Pasigan finished the game with 4 receptions for 145 yards and 2 touchdowns.

The Chargers scored their only touchdown with 1:00 left on the clock in the fourth quarter on a 45 yard fumble recovery by Melvin Schmidt IV (extra point conversion failed).

Pearl City starting QB Travis Joe passed for 138 yards completing 12 of 24 with no TD's. Kristian Va'ana-Kikuyama hit on 3 of 14 passes for 44 yards and one interception. Daicorri Briscoe 6-70, Tanner Tokunaga 5-68, and Isaac Amorin 5-50 led the Chargers receiving core. Briscoe also rushed for 45 yards on one carry.

Pearl City (0-1) will hit the road to take on the Kaiser Cougars (0-1) on Friday, August 24. The junior varsity kick off is scheduled for 5:00pm with the varsity to follow 25 minutes after the conclusion of the junior varsity game. 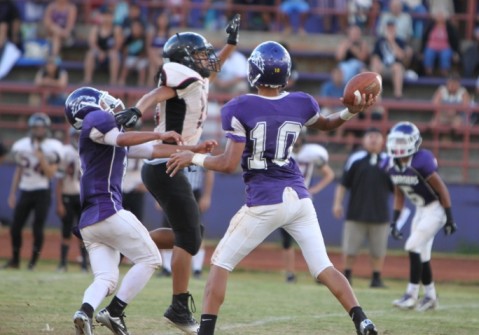