The University of Hawaii’s Pearl City Urban Garden Center celebrated the United Nations International Day of Peace on Sunday, Septemer 23, 2012 with the dedication of the Pearl City Peace Garden and pathway located on the UGC grounds.

Guest speaker Maya Soetoro-Ng, who is an educator and author and also the maternal half-sister of President Barack Obama, spoke to those in attendance about conflict resolution and peaceful interaction. Reaching children at an early age so that they can learn how to better communicate with one another was also presented in her speech.

“We to often think about Peace in sort of simplistic terms as only conflict resolution,” said Soetoro-Ng. “Conflict resolution is important, and mediation and arbitration, and all of those things, and conflict transformation. These things are so vitally important, but so much of what we have to, I think, is to begin to build the habits of mind, the dispositions, the perspectives, the desire for peaceful interaction so that young people can walk in the world at a very early age, knowing how to communicate with one another before the conflicts arise. Knowing how to extract and understand their own power and thinking of themselves, and their identity is much broader than too often they do now. Thinking of themselves in very connected and inter-connected ways.”

Ray Uchida from the University of Hawaii's – College of Tropical Agriculture and Human Resources, spoke about the importance of the Peace Garden and developing Peace pathway that will lead to the UGC Rose Garden.

"By having this Peace Garden and developing a Peace pathway, it will lead directly to the Rose Garden,” said Uchida. “As a lot of us know, the roses have been known for flowers of peace and hopefully we will have other people join in the Peace pathway that will guide them right to the rose garden.”

Sunday's Peace Garden dedication ceremony also honored individuals and organizations that made a difference in their efforts of bringing peace to our communities and the world in 2011 and 2012.

Kahu Kaleo Patterson from the Peace & Justice Reconciliation Center performed a blessing for a beautiful Bodhi Tree that will grace the entrance to the Pearl City Peace Garden.

Attendees on Sunday were also treated to a hula performance by the Garden Hula Dancers, music performed by award winning musician and songwriter Jeff Peterson, and music from the SGI Ukulele Youth Group. The Makiki Serenaders performed the "Appalachia Waltz" and closed the event with "Let There Be Peace On Earth". 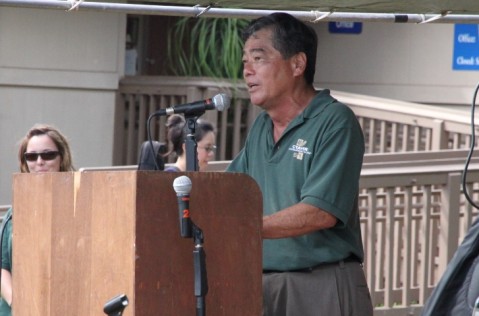 Ray Uchida from the University of Hawaii –  College of Tropical Agriculture and Human Resources. 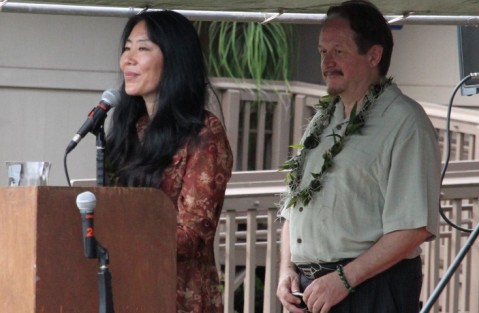 Xiao Fang Zhou along Michael North from the Zhou Enlai Peace Institute speak to attendees in a message of Peace and Aloha after receiving an award from the UH CTAHR Urban Garden Center for their efforts in supporting peace. 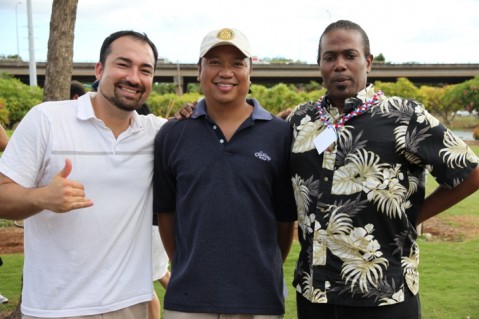 Rotary Club of Pearlridge past president Theo Stiller (left) and current president Tony Lorenzo (center) were recognized on Sunday for the club's community service project efforts that assisted in provided manpower for the creation of the UGC Rose Garden and recently constructed rose garden pergola. Stiller and Lorenzo are also pictured with Eric Butler from WorldPeacePlan.org. 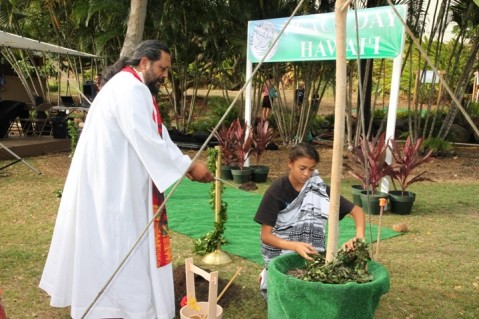 Kahu Kaleo Patterson from the Peace & Justice Reconciliation Center and Kaya Kamakau'i Patterson perform a blessing for a beautiful Bodhi Tree that will grace the entrance to the Pearl City Peace Garden. 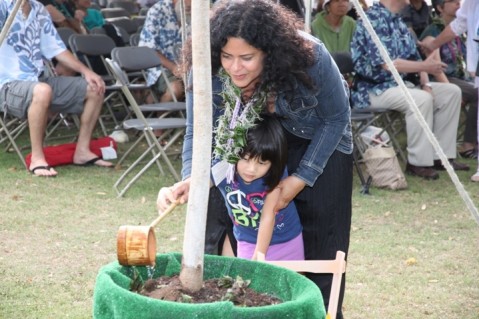 Maya Soetoro-Ng and her daughter participate together in the blessing of the Peace Garden Bodhi Tree on Sunday at the UH CTAHR Pearl City Urban Garden Center. 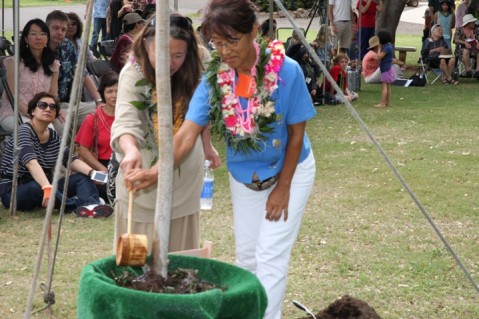 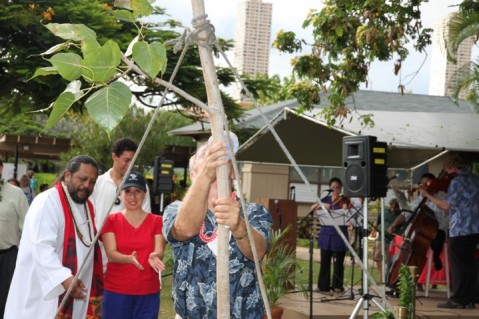 Bob Speer, past President of the Urban Garden Center's Master Gardener Program and coordinator of the Peace Garden and Rose Garden development offers his prayers upon the Peace Garden Bodhi Tree. 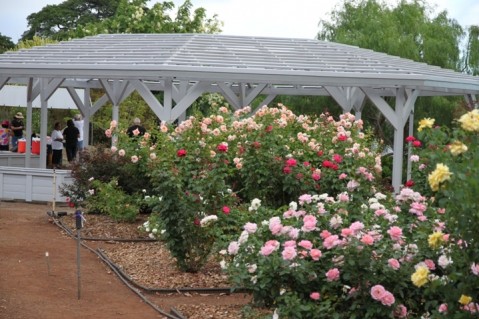 UGC Rose Garden and gazebo that sits along the path of peace offering tranquility and beauty to visitors. 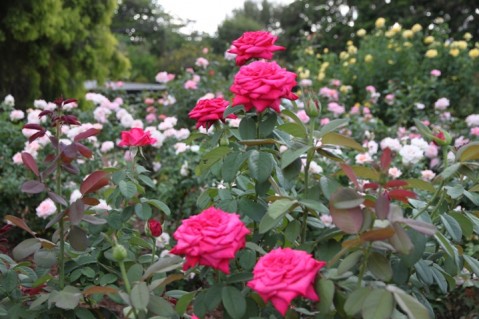