Pearl City's Maile Shigemasa is a true champion in every sense of the word when defined by her inspirational championship performance at the Oahu Interscholastic Association Varsity Boys and Girls Cross Country Team and Individual Championships held at Hawaii Pacific University's Hawaii Loa Campus on Saturday.

Shigemasa found herself trailing the lead pack in the third and final lap of the 3-mile HPU "hilly" course that included a steep climb in each lap that tested her endurance and ability to make the transition from running on a flat, Waialua High School course during regular season meets as well as the OIA Western Division Championships.

"Waialua is the easier course but this course is a good place to run before states because states is going to be challenging this year," said Shigemasa. "I think the hills definitely helped. I feel confident going into the states."

After bursting out to a lead on lap one, Shigemasa had company in Radford's Tandeka Nunn who caught and passed her on the second lap. On the final lap, Shigemasa was trailing the lead pack of three runners by a few yards. That's when she decided that losing was not an option and turned on the jets.

"I was a little scared, I thought I was going to lose it," Shigemasa said. "I didn't want to lose, so I just went for it. I think maybe I went up a little too hard on the first hill and it showed on the second and third lap."

Shigemasa also led her teammates to a fifth place finish in the team competition that earned the Lady Chargers a spot in this week's HHSAA Cross Country State Championships at Hawaii Preparatory Academy on the Big Island.

Reece Teramoto was the first to cross the finish line for the Chargers in sixth place covering the 3-mile course in 17:10.80. Leilehua's Christopher Olverson
placed first with a time of 16:44.44.

Congratulations to the Charger boys and girls cross country teams for their exceptional performances at the Oahu Interscholatic Association Varsity Boys and Girls Cross Country Team and Individual Championships.

Also to congratulations to Charger Head Coaches Todd Nishida and Donaldo Hopper. Great job as always in preparing and guiding your teams.

Good luck in the state championships! 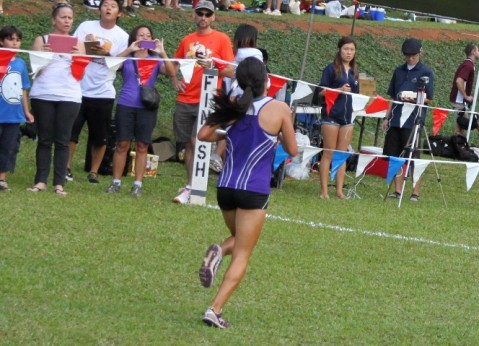 Maile Shigemasa approaches the finish line in the girls varsity OIA Cross Country Championship race which she won in a time of 20:03.07. 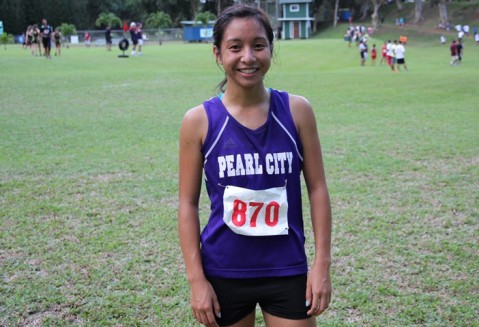 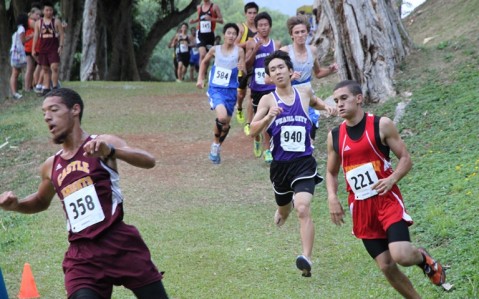 Reece Teramoto #940 comes flying down the hill on the second lap in the boys race on Saturday. Teramoto was the first to finish for the Charger boys in sixth place completing the 3-mile course in 17:10.80.