Proceeds from the event benefited the Pearl City High School Project Graduation Program and other school programs as well.  Dozens of craft and food vendors filled the school cafeteria and the school grounds and walkways near the cafeteria.

2013 PCHS Project Graduation Co-Chairs Melissa Bojorquez, PCHS '82, and  Patti Rabacal, PCHS '76, ran a smooth, well organized event with the support of many volunteers who worked hard in the different food booths and event coordinating roles throughout the day.

Co-Chairs Bojorquez and Rabacal have also stepped up their efforts in broadening the reach and support of the Project Grad program on campus and in the community. Sunday's success was a positive step in that direction.

"We're here today selling huli huli chicken, sushi, School Kine Cookies, Great Harvest Bread and Waffle Dogs, all to support Project Grad," said Co-Chair Bojorquez.  "All of the funds that we earn from our fundraising efforts goes towards the support of Project Graduation night. We take all the kids and celebrate graduation in a safe, drug free and alcohol free night.”

“I would like to thank Co-Chair Patti Rabacal, the students, and all the long timers who have always been a supporter of Project Graduation,” added Bojorquez. “We have a lot of parents that don't even have kids anymore in high school and they're still here supporting Project Grad. Also, we don't just fundraise for the graduating class of this year, it's an ongoing fundraising effort to support every graduating class of Pearl City High School."

"We're trying to change the image of Project Grad," said Co-Chair Rabacal. “All these years we've been fundraising only for the senior class. This year, we're trying to get more people involved. Our chair people are not all senior parents. We have some freshman, sophomore and junior parents who serve as committee chair people. It’s like the legacy moving on without us always being here. We want it to be like a school function and not necessarily only Project Grad for the seniors that night. We're looking for a collaboration."

"We wanted to move towards really involving the community and partnering with the community to do our fundraising events together," said Bojorquez. “So far we've worked with Breene Harimoto and the Pearl City Foundation, and the Pearl City Community Association. We think that doing it collectively, as a community, is really the direction. Also, we want to engage PCHS alumni, especially with our 40th Anniversary which we're still selling t-shirts to fund the construction of our new trophy awards case. We really want Project Grad to be not just graduation night actually, but all the efforts of volunteers to support Pearl City High School."

PCHS students participating in Sunday's event fundraiser volunteered in many different areas and capacities around campus in support of their school. A group of PCHS Economic students manned a food and craft booth that featured handcrafted key holders, Hawaiian jewelry, homemade fried rice and lumpia with profits from the items sold being designated to support the Lokahi program and other selected charities. (Gil Castillo and a few other students also helped prepare the banana and vegetable lumpia and fried rice).

"We're just expecting to make a profit so we can not only pay back the people who made the food, but give to the charities too," said Castillo.

"I made the key holders and they were handcrafted by four of the students in my Economics class," said Lovelynne Yago. "Proceeds from the sale will go towards Lokahi and the Humane Society."

"I made the handmade jewelry," said Kaya Chong. "I dove for all the shells from beaches along the North Shore to Waianae. It's one of my hobbies every time I go to the beach to look for shells."

It was a truly amazing display on Sunday, of the dedication PCHS students have with regards to the welfare of their classmates, teachers and school pride.

Congratulations to all the volunteers who came together  to support Pearl City High School students. Mahalo to all the vendors, and especially the Pearl City community for their support as well. 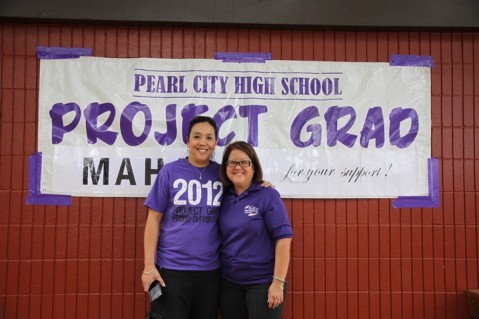 PCHS 2013 Project Grad Co-Chairs, Melissa Bojorquez PCHS '82 (left) and Patti Rabacal PCHS '76 would like to thank everyone for their support of the PCHS Project Grad Program. 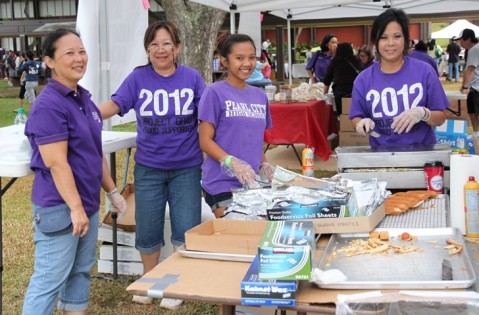 PCHS Project Grad volunteer crew members take a break from making Waffle Dogs for a photo op on Sunday in their Project Grad fundraiser food booth near the school cafeteria. 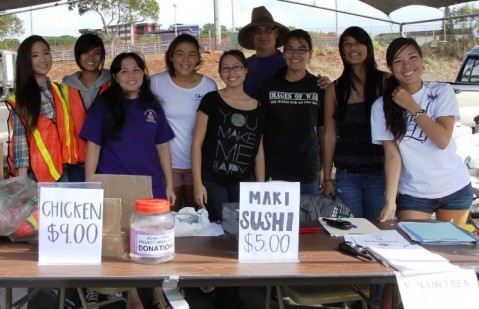 Mahalo to all the PCHS staff and Project Grad student volunteers who did a great job at the Huli Huli Chicken and Maki Sushi sale held at the lower campus athletics parking lot. 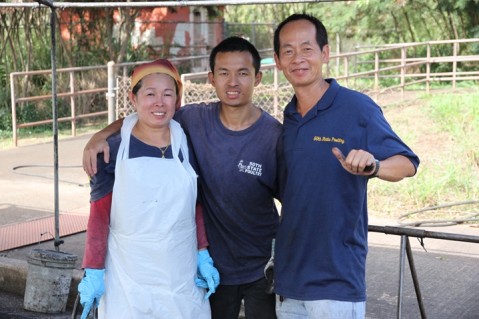 Also, mahalo to the 50th State Poultry staff for all their hard work. Awesome job cooking all those chickens! 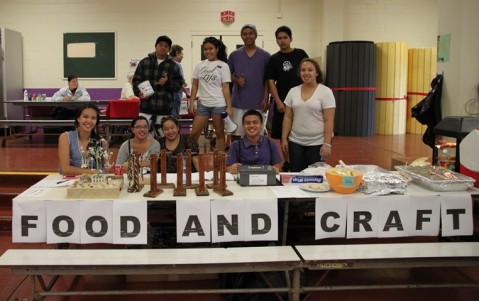 PCHS Economic students put together one of the events most popular booths that featured homemade "ono" food items and beautifully hand crafted gifts. 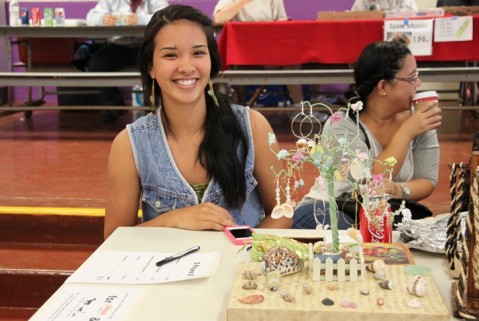 Kaya Chong, PCHS Class of 2013 is pictured with her original Hawaiian jewelry designs that were available for purchase on Sunday in the school cafeteria. 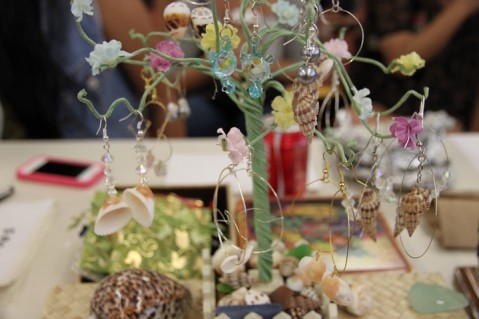 A closer look at Kaya's designs, some of which were hand picked from the ocean by Kaya while diving off of some of her favorite Oahu beaches. 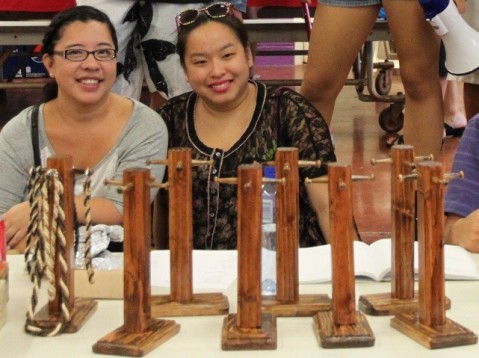 PCHS Economics students sit with their key chain holders that were handcrafted by Lovelynne Yago and four of her Economics classmates. 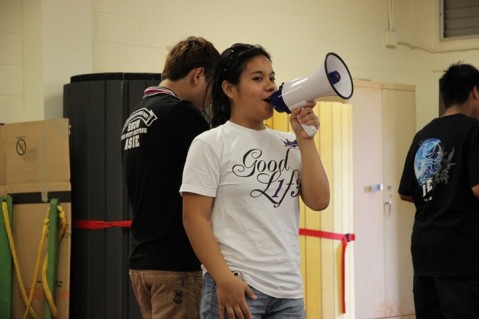 Lovelynne Yago calls out to craft fair attendees to come over and check out the students food and craft fundraiser booth. 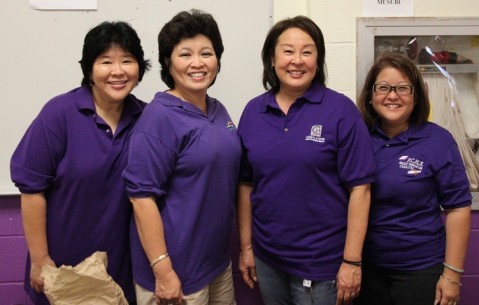