The CTAP – Community Traffic Awareness Program conducted another signwaving event on Kaahele Street in Aiea near the entrance to the Newtown Recreation Center on Thursday, November 27, 2012.

The purpose of the event was to remind motorists to slowdown and watch for pedestrians as they commute through our Aiea and Pearl City neighborhoods. Keeping area kids and neighbors safe is a concern and the message sent out to motorists on Thursday.

This area project is in collaboration with HPD and led by State Representative K. Mark Takai and community residents. 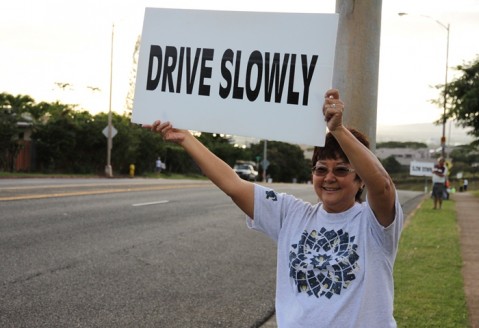 “There continues to be a problem with people speeding up and down Kaahele Street at all times of the day and this often results in pedestrian accidents and fatalities,” Takai said. “We need drivers to obey the speed limit along this street and be aware of pedestrians in the crosswalk.”

Mrs. Mayne is one of the community residents who has participated in the past eleven Kaahele Street CTAP events in 2010, 2011 and 2012. 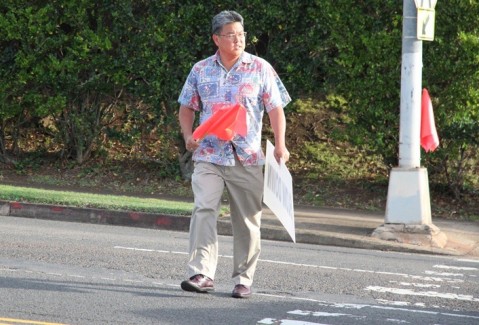 Representative Takai uses the recently installed traffic flags that have been implemented to help make pedestrians more visible to motorists as they cross in the marked crosswalk on Kaahele Street near the entrance to the Newtown Recreation Center. 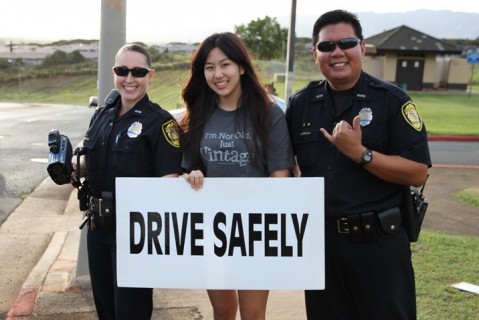 HPD Officers Pua Conti (left) and Anthony Bonilla (right) pose with a CTAP volunteer on Thursday near the crosswalk on Kaahele Street fronting the entrance to the Newtown Recreation Center.