The car show also featured live entertainment and a chance to win two Sonny D ukuleles. Diana Harada of Honolulu and Kawika Delima of Kapolei were the lucky winners after their names were pulled Sunday night from a special drawing at the car show.

Mahalo to BLEIZN FX Productions co-owners Lei Naumu and Bernard Cabral for their efforts and success in producing another terrific car show and Sonny D ukulele giveaway that proved to be a real Christmas treat for our Pearl City community this holiday season. 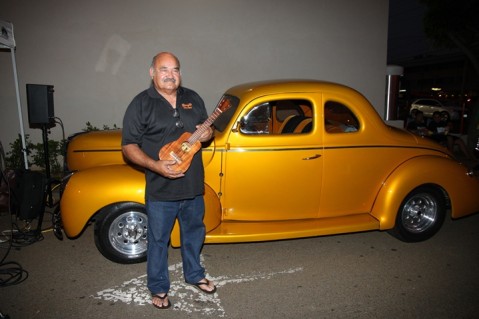 Sonny D pictured holding one of two ukuleles that were given away on Sunday. He is also the proud owner of the 1940 classic car pictured behind him which is currently for sale.