Acosta and Neyland were escorted in style by Eric Sakai who drove his '58 Corvette along the parade route that started at Momilani Elementary School and proceeded down Hoolaulea Street to the Pearl City Shopping Center. 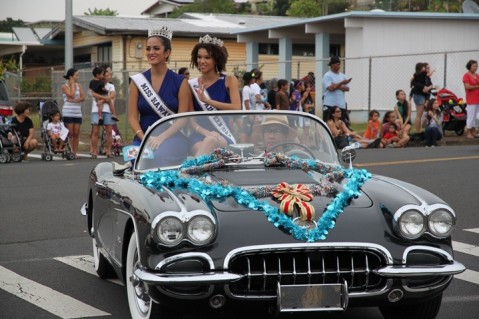 Eric Sakai pictured behind the wheel of his '58 Corvette as he escorts 2013 Miss Hawaii USA Brianna Acosta and 2013 Miss Hawaii Teen USA Samantha Neyland along the Pearl City Christmas Parade route on Sunday.

"It's really an amazing experience," said Acosta. "Personally I prepared for seven years, so it was something that I've always wanted my whole life and to finally  reach the accomplishment it feels very surreal, but I'm very happy to do the job and looking forward to Miss USA."

"It was a little difficult as a teen going through the program. I was first runner-up twice in a row, so of course it was little difficult, a little bitter sweet," Acosta said. "It really gave me the experience as well as the mindset that I needed to go into Miss Hawaii USA full force and just give it my all, and it showed when I won on my first try."

Growing up on North Shore in the small plantation town of Waialua, Acosta learned the value of working hard and taking care of one another. Those values, learned at an early age, has built a foundation that allows her to strive for goals that when reached, will benefit those that are a part of her life. This spring, Acosta will graduate from the University of Hawaii at Manoa with a degree in journalism with a minor in political science.

"Most people don't even know where Waialua is when I say I'm from Waialua, but it is a small plantation town on the North Shore that was famous for growing the world's best sugar," Acosta said. "The mill closed down in 1996. I think coming from somewhat of a humble background as well as a plantation community mix of different ethnicities, and still having that environment of camps where the ethnicities were separated, I think it really gave me a strong foundation. I always go into something never saying that I have it in the bag. That was my advantage, that I knew that I had to work hard to achieve my goals. Attending Waialua High School was a small school, but I really feel it’s one of the greatest as far as the people. That's something that really forced me to grow as a person, being able to talk to people and being able to relate to them. I feel it’s great for Miss Hawaii to at least stay home and represent by attending the University of Hawaii at Manoa. I'm graduating this spring and I'm happy to hold a journalism degree with a minor in political science and hoping to represent Hawaii as well." 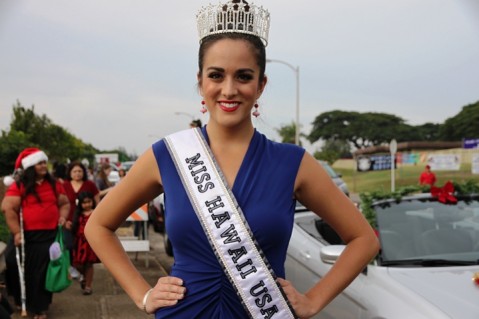 "It's really unbelievable, it really hasn't sunken in yet." said Neyland. "I feel like a normal person and then I put this banner and crown on and suddenly people look at me different. I'm so excited and I'm really glad that I did win, but it's not really in my head yet.  It was my first try with the Miss Hawaii Teen USA pageant. I did the United States pageant in May, so this was my second pageant ever. I'm still kind of new at competing in pageants."

Neyland has her sights set on attending college here in Hawaii with a possible interest in earning a communications degree. Staying home for college, she hopes, will give her an opportunity to give back by utilizing her title to help others.

"I would like to go to UH," Neyland said. "I really want to stay here especially with this title. I can do so much here and don't want to leave half way through. I feel like I need to do as much as I possibly can while I have this position so I'm going to stay here and go to either the University of Hawaii or Hawaii Pacific University. I'm looking at being a communications major but not sure yet."

Neyland is having a great time as senior at Moanalua High Schoo. She's taking classes that she really enjoys, Broadcast Journalism and Spanish.

"My favorite class is broadcast journalism, it’s so much fun," Neyland said. "We go out into the community and report on  real stories. I've learned so much in this class, it’s so amazing. I also take AP Spanish. It's really hard, but I love it. I lived in Spain when I was younger so that's how I got into it. Being in a different culture is a lot of fun. It’s easier to learn it when people are actually talking in that language.

A possible run for the Miss Hawaii USA crown in your future?

"I don't know, if the opportunity is there I would probably love to do it," Neyland said with a smile. "This is amazing already. I can't imagine having another whole year of doing it. I haven't thought about it too much yet." 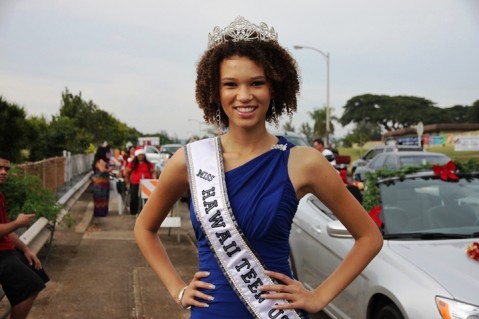 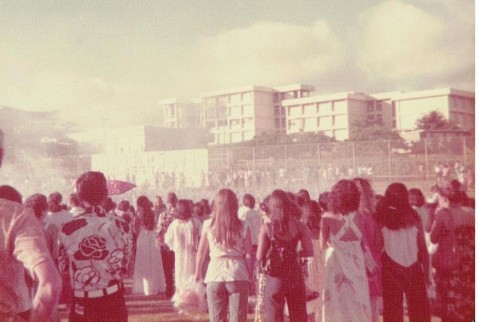 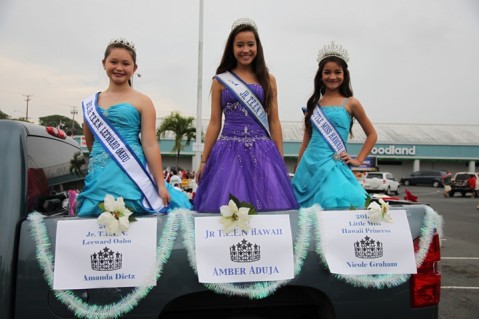 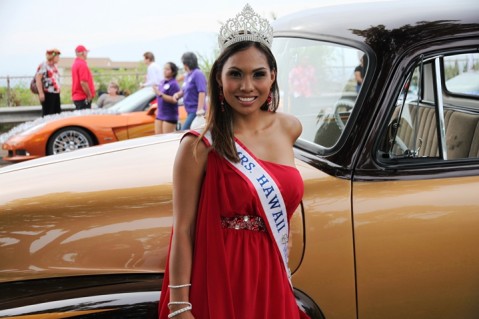 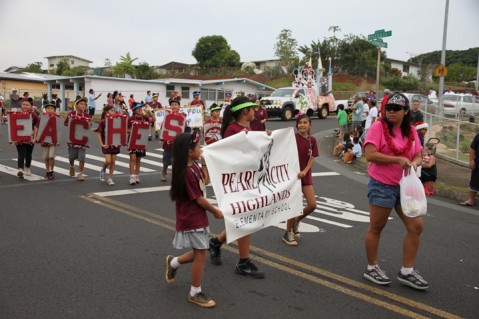 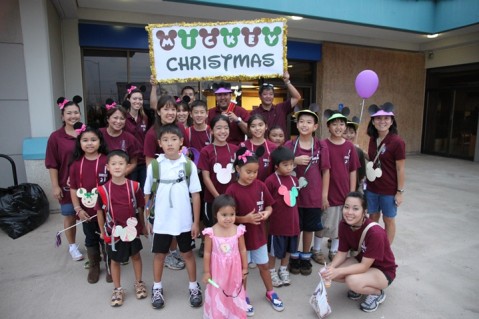 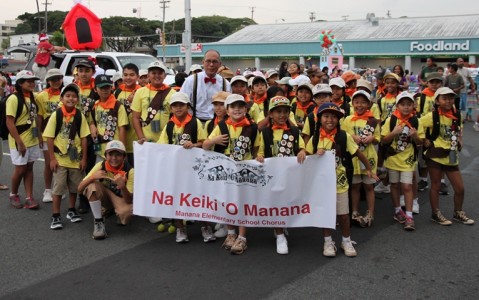 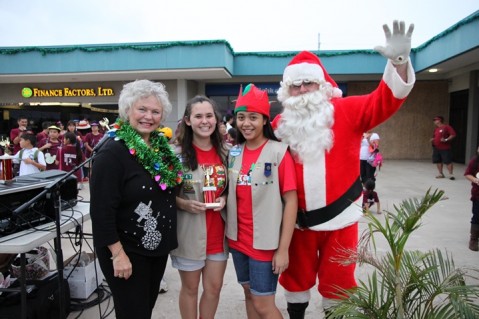 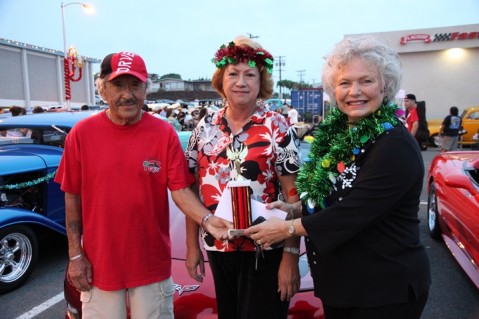 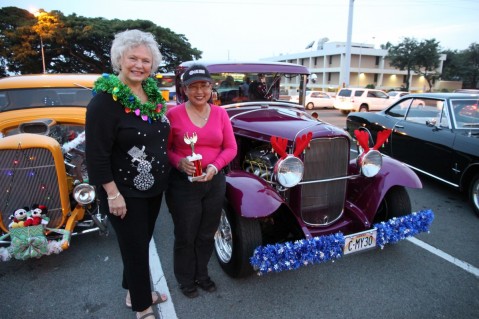 Laurie Miyagawa from the Rust Bucket Club receives a trophy from Sheri Rolf after placing second in the Best Vehicle Unit Division. 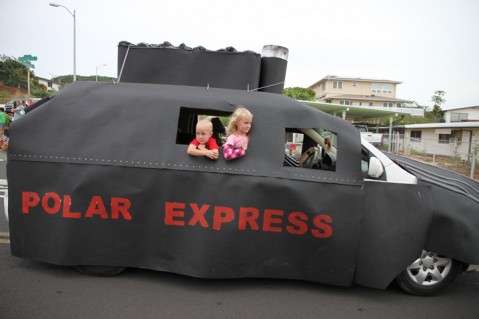 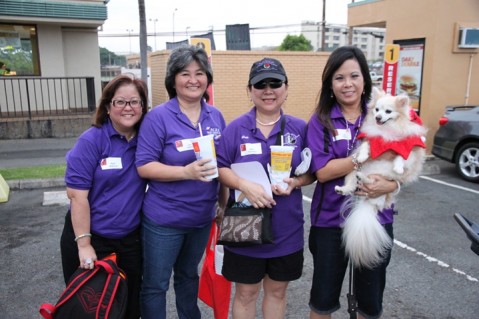