Operation Blessing Basket, delivering hope to those in need

"Operation Blessing Basket is so close to our hearts, we just want to show people that they are loved and there is hope in hard times. Several of our families live in Pearl City – they commute to our gym in Kapolei because they feel a sense of family and they sacrifice to come where they are welcomed and love despite an inability to always contribute." 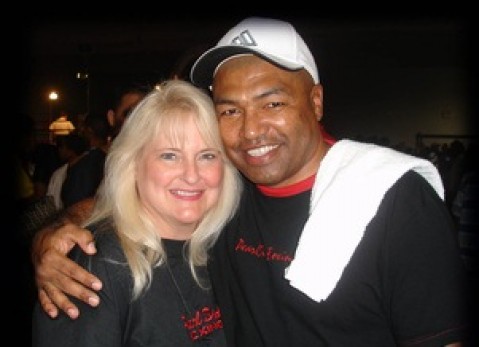 Operation Blessing Basket started several years ago at Pearlside Boxing. After class on Wednesday, we wished all the students Happy Thanksgiving and told them to enjoy their turkey dinners and pumpkin pie. One of the students asked if he and his 3 brothers could come to our house for Thanksgiving. When told by Coach – "No man – you have to celebrate Thanksgiving with YOUR family – that's what Thanksgiving is all about", the young man told us that his mom was in jail and he was being taken care of his grandma who had a very limited income and was sometimes out with her boyfriend, and he knew they would not be having anything special to eat on Thanksgiving…. when we heard this – we immediately took up a collection from the people there and then chipped in about a hundred dollars ourselves. We ordered a complete Thanksgiving meal from Zippy's and went to Safeway and bought a bunch of groceries. We delivered it to them on Thanksgiving Day and the boy and his family (3 brothers and grandmother) were so blessed and so thankful.

After that, we began blessing people who couldn't bless us back at Thanksgiving and Christmas….homeless, elderly and those in our boxing Ohana who had lost jobs or other financial devastation.

Over the years, we have shared with our friends and family and last year we distributed 20 elderly bags and about 20 homeless bags.

People contribute about $25 towards a "blessing basket or bag" – but because of frugal shopping, taking advantage of sales and our non-profit status, we are usually able to bless them with about $50 worth of stuff.

The elderly bags usually contain an afghan or blanket; sock, toiletries, food items; cleaning items and an ornament with the person's name on it, along with an encouraging note.

One person we blessed last year was a homeless man collecting water bottles. His name was Steven and we blessed him with a bag and gift certificate to a local restaurant and he was so excited – he said he couldn't remember the last time he had a real, sit-down hot meal. He walked away just shaking his head that someone would give him a meal certificate.

Another was an elderly couple living in their van with their little dog. She was so excited and kept wanting to take pictures and hug us. We blessed them with 2 bags of food and toiletries along with 2 hot meals at the Hapa Grill – a local restaurant with great food that they can walk to.

Another man living in his van and confined to a wheelchair was just returning from riding the bus back from Tripler Hospital where he was getting medical treatment. (He's a veteran) He was so grateful for the bag of food and toiletries and the gift certificates for Hapa Grill.

Another girl was in a car- with a man and two kids. Their car window was broken out and they had a towel over the window. We asked if she was ok or needed help and she said no. We drove away but one of the boys felt like we needed to go back – so we did. When we did – we found out they were homeless and would be camping on the beach starting Friday (with a permit) but until then they felt safer on the busy street in Kapolei. One of the ladies who was helping to distribute the bags had some toys and kids items that she just happened to have in her car from her own granddaughter and she gave them those toys for the kids. We also gave them 2 bags of food and toiletries and 2 gift cards to a local restaurant they could walk to. Another one of our members also gave them $10 cash to repair their window. They were so blessed they cried.

Another touching story was when we drove around the neighborhood, and we thought there were no other homeless people around. But we felt we shouldn't go home or call it a night yet. So one of the boys said he felt like we were supposed to go near K-mart by the Goodwill shack (since moved). There we found a young couple – we told them we were blessing people for Christmas – and they said they had 2 small kids – could we bless them instead. We asked where there kids were and they said they were sleeping behind the bushes. Their kids were actually sleeping IN the bushes already so we didn't get to talk to them – but we gave them food and toiletries and the restaurant gift cards – and they were so thankful that they were going to be able to take their kids to get something good to eat.

This year, we have 5 families in our own Pearlside family – who are MORE than struggling – lots of people are having hard times – but these people are barely making it. Of course we scholarship their classes – but when we call ourselves an Ohana – we mean it – and so we want to help them through this hard time – whether it is buying them groceries and toiletries – giving the man a gift card to take his family out to eat on Christmas – paying an electric or medical bill – or providing them with a few moments of joy at a movie or bowling or at Chuck E. Cheese Restaurant. This is what Ohana is all about.

It is such an exciting project – I could go on and on – but all I know is that God called us to do this. 2000 years ago – there was no Macy's – no Amazon – no ebay – there was just God's gift of His son Jesus – born in a manger – and Shepard and wise men celebrating His birth – nowadays it is politically incorrect to even wish people a Merry Christmas – but this baby Jesus IS the reason for the season – and we pray our efforts will bless and honor HIM and HIS ohana!

If you would like to make a donation to Operation Blessing Basket, please call Robyn at 348-9202.