Both Pearl City (0-5) and Waialua (1-5) were looking for their first wins of the season as the teams stepped up to center court on Saturday.

Waialua had an 8-0 lead over Pearl City late in the second period when the Lady Chargers went on a run, pulling within one point at 7-8 and taking the lead at 10-8 on a 3-pointer by Kacie Chinen with 1:20 remaining in the period.

Dhyrille Moraleda tied it up at 10-10 for the Lady Bulldogs on a pair of free throws. Raydeen Kobayashi-Kajiwara broke the tie after converting a free throw that gave the Lady Bulldogs the lead 11-10. With 8 seconds left in the period, Kamryn Lendio hit one of her four 3-pointers on the night, to extend Waialua's lead to 14-10. Moraleda stole the inbound pass and dropped it in to give the Lady Bulldogs a 16-10 lead at the half.

Waialua held leads by as much as 12 points in the second half, but the Lady Chargers pulled within seven points 35-29 with 2:02 on the clock in the fourth period after Waialua's top scorers Kobayashi-Kajiwara and Lendio fouled out of the ball game.

Kacie Chinen moved the Lady Chargers within five points at 37-32 after hitting for two pointst with five seconds left in the game. Dhyrille Moraleda pumped in two points to put Waialua up 39-32. Johnneen Kapua scored the game’s final point for the Lady Chargers on a free throw.

Saturday's loss to the Lady Bulldogs was the Lady Chargers best scoring output of the season and best overall performance by the team who are still seeking their first win of the 2012 regular season.

"We played real hard, we normally play real hard, we never give up,"  said Pearl City Lady Chargers Head Coach Miles Okamura.  "The girls actually played the best we've ever played so far. Little mistakes here and there, but hopefully next time we'll get it."

Head Coach Okamura has been forced into utilizing the play from his bench to keep the Lady Chargers competitive.

"We had a lot of girls that normally don't get a lot of minutes playing today like Amber Bala,"  Okamura said.  "She played as hard as she could. She played really well. We were missing two starters and the other girls on the bench picked it up tonight."

Pearl City's Kacie Chinen is one of a few current Lady Chargers basketball players who have has crossed over from very successful careers as varsity volleyball teammates, to playing big roles so far this season on the basketball court. Chinen, who was an all-star at her libero position in volleyball, has become a hot hand as a starting guard for the Lady Chargers.

"Kacie has improved tremendously," Okamura said. "From not dribbling the ball, and not even moving, to actually taking shots. She was our leading scorer tonight. We're working with our volleyball girls, and hopefully we can get some more next year,"

The Lady Chargers return to action, on the road, against Kapolei on Friday, December 28, 2012. The Junior Varsity tips off at 5:00pm with the Varsity to follow at 7:00pm. 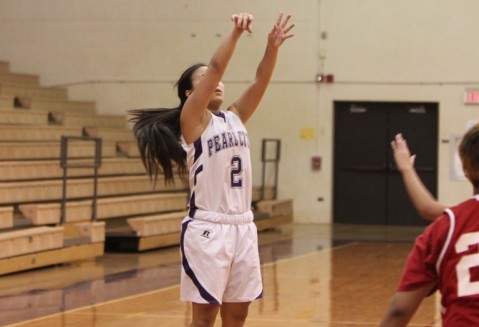 Pearl City's Kacie Chinen pumped in 13 points including one 3-pointer to lead the Lady Chargers scoring against Waialua. 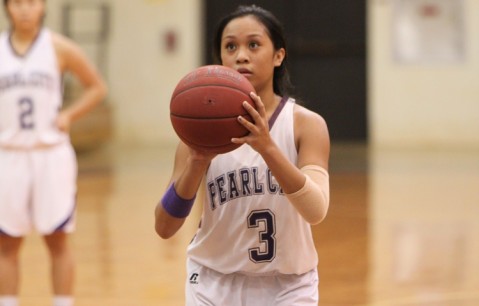 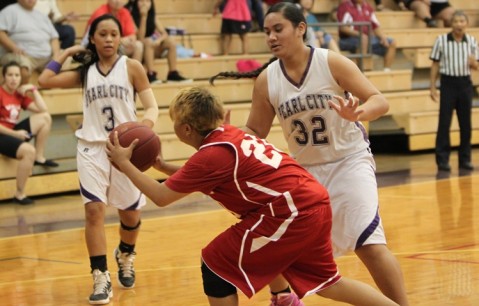 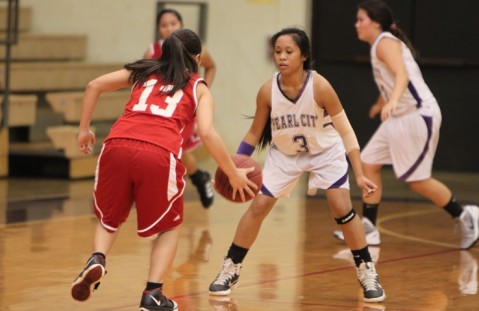