The Chargers shook off a bout of the jitters in the first quarter after falling behind the Sabers 14-11 but fought back in the second quarter, to outscore the Sabers 14-4 and take a 26-18 halftime lead.

“After the first quarter we started to settle down and started to play defense,” said Chargers Head Coach Lionel Villarmia. “They were just a little nervous and wanted to make plays from the start. It was an “I” thing and we settled down and started playing as a “TEAM” and that helped our defense a lot.”

The Chargers and Sabers battled through most of the second quarter before the Chargers pulled away late in the quarter.

Pearl City's Sonny Glisson hit a 3-pointer to tie the score at 14-14 at 7:25 in the second quarter. Tyson Hickcox gave the Chargers the lead at 16-14 with 6:49 on the clock. Campbell came back to tie the score at 16-16 on a bucket by Justin Tago-Sue with 3:42 left in the quarter.  Reymart Rosario put Pearl City back on top at 18-16 with 2:54 remaining in the quarter.  Campbell came right back to tie the game at 18-18 on a basket by Gilbert Dayanan. Joshua Cubi broke the tie on 3-pointer that put the Chargers up 21-18 with 1:20 on the clock. The Chargers increased their lead to 23-18 on a couple technical free throws by Glisson with :48 on the clock. The Chargers scored two points on a lay-up to go up 25-18.  Glisson went to the line and converted one of two free throws to put the Chargers up 26-18 at the half.

The Chargers dominated the second half moving out in front of the Sabers by as much as 17 points. Coach Villarmia utilized a core of his starting players and depth from the bench to keep fresh legs and constent pressure on the Sabers.

Gilbert Dayanan led the Sabers with 10 points followed by Justin Tago-Sue with 9 points.

The Chargers run into OIA Red Division powerhouse Mililani on Saturday at home and will be tested by the Trojans size and zone defense.

“We have Mililani next and their always big and their going to zone us,” Coach Villarmia said. “We’ll see how we do against the zone.” 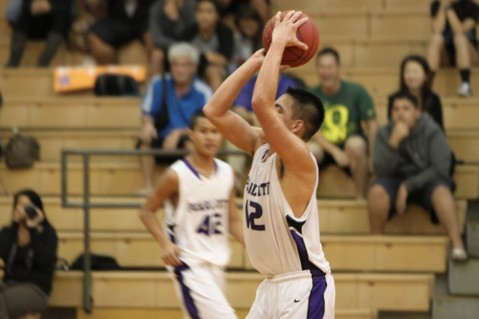 Tyson Hickcox pumped in 11 points for the Chargers. Hickcox pictured at the free throw line in the second quarter. 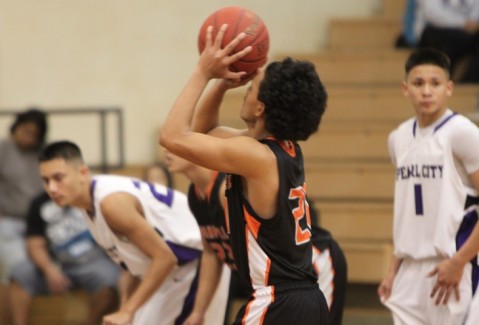 Gilbert Dayanan led the Sabers with 10 points. Dayanan pictured at the free throw line in the fourth quarter.