The Kapolei Hurricanes and Pearl City Chargers fought it out last night on a muddy and rain soaked Kaiser High School Field during the OIA Red Boys Soccer Championship Tournament Semifinals won by the Hurricanes 1-0.

It could have been a wider margin of victory last night for Kapolei if wasn't for the stellar play of Pearl City goalie Jared Louis who had a busy night knocking down and deflectiing numerous shots on goal by the Hurricanes.

In tonight's title match up it will be an all OIA Red Western Division representation between Mililani (11-0-1) and Kapolei (11-0-1).  Both teams finished the regular season undefeated at 9-0-1 with the only blemish on their records coming between the two ball clubs on December 14, 2012 when they played to a 0-0.

The OIA Red Division Championship is scheduled for 7:00pm at Kaiser High School.

Both championship title games will be broadcasted live on Oceanic's OC-16. 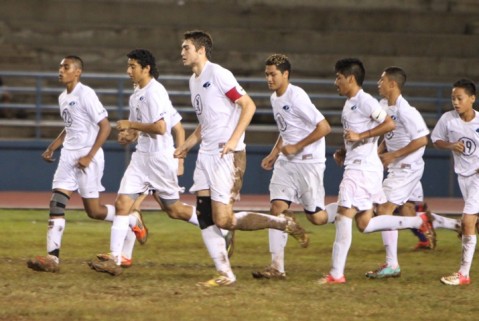 #22 Vineal Singh (far left) leads his Kapolei teammates after scoring the games only goal in the 7th minute against the Chargers.