Tyler Liana's game high 17 points led the Governors (9-3) over the Chargers (9-2) and into the next round where they will face undefeated OIA Red Eastern Champion Kalaheo (12-0) in the semifinals on Wednesday, February 13 at McKinley High School. Kalaheo defeated Campbell on Saturday in a blowout 62-37.

OIA Red Eastern Division runner-up Moanalua (11-1) will take on OIA Red Western Division Champion Kapolei (11-0) in the other semifinal. Kapolei just got past Kahuku (7-5) in the quarterfinals 48-44 to advance.

The Chargers and Governors found themselves in a tough, up-and-down the court shoot-out in their Saturday night quarterfinal match-up. In a tight first half, Farrington won the first quarter 10-8 with Pearl City taking the second quarter 11-10. The Governors won the momentum battle taking a one point, 20-19 lead into the half. Farrington carried that momentum into the third quarter outscoring the Chargers 19-8. The Farrington offense was led by shooters Tyler Liana 17 points, Jacob McEnroe 14 points and Marco Cudia 13 points, 3PM.

The Chargers and Governors combined for 51 points in the fourth quarter with Pearl City winning the quarter 28-23.

Isaac Amorin opened scoring for the Chargers in the first period with two points (7:12). Farrington tied the score at 2-2 on a couple free throws by Jacob McEnroe (5:50). McEnroe put Farrington up 4-2 on lay up (3:58). Tyler Liana lays it in for the Governors to go up 6-2 (3:15). Pearl City's Reymart Rosario hit two free throws to pull within two points at 6-4 (2:45). Isaac Amorin ties the game at 6-6 on a layup (1:55). Jacob McEnroe scored a basket to break the tie and put the Governors up 8-6 (29.6). McEnroe was fouled on the play but missed the free throw attempt. Tyler Liana went to the line to shoot two, made the first but missed the second shot. Farrington went up 9-6. Jacob McEnroe went to the line to shoot two after being fouled attempting to grab the rebound on Liana missed free throw (26.3). McEnroe made one of two shots to give Farrington a 10-6 lead. Daicorri Briscoe hit two points from inside the key.  Pearl City trailed by two 10-8 (:10). Quarter Ends: 10-8 Farrington. 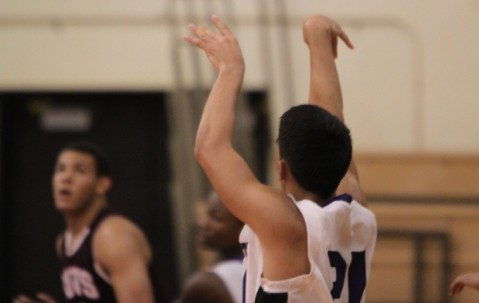 Pearl City's Sonny Glisson unloads on a three-point shot against Farrington. Glisson led the Chargers with 16 points including four 3-pointers in the fourth quarter. 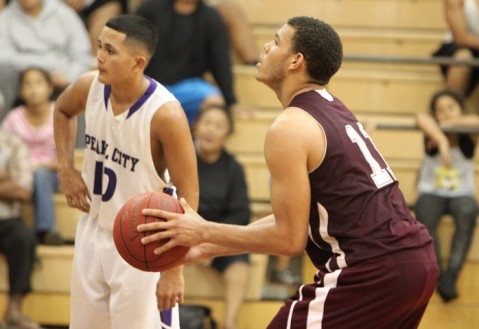 Farrington's Jacob McEnroe pictured at the line against the Chargers. McEnroe scored 14 points for the Governors including key free throws down the stretch in the fourth quarter. McEnroe is also pictured at the foul line with Pearl City's Reymart Rosario who had a big game for the Chargers scoring 15 points which included three 3-pointers. 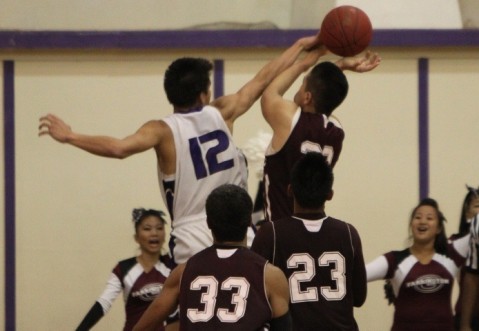