The Pearl City Chargers behind Sonny Glisson's 22 points defeated the Moanalua Menehune 68-60 in OT last night in the first round of the Hawaiian Airlines HHSAA Boys Basketball Division I Championship Tournament played at McKinley High School.

The Chargers advance to today's quarterfinal round and will take on Big Island Champion Konawaena, the tournaments #4 seed at 5:00pm at McKinley High School.

Last night's Pearl City win over OIA Runner-up Moanalua was a win that Chargers fans will remember for a long time because its been a while since the program has made it out of the first round in state tournament play.

The Chargers took down the Menehune last night in style with no fear. Full throttle from start to finish. Even with their big guys, Tyson Hickcox and Daicorri Briscoe fouling out late in the game, the Chargers kept up the pace and pressure with the play of their guards who hit from everywhere on the court in the second half and in OT.

Moanalua went into halftime leading the Chargers 23-20. The Chargers took the third period 37-36. Pearl City went up on Moanalua by as much as nine points in the fourth period but the Menehune came back to tie the game with about eight seconds left on the clock on a couple free throws by Ola Brown. Reymart Rosario missed a last second shot to send the game into to overtime. Pearl City dominated the overtime period outscoring Moanalua 17-9. Sonny Glisson, Reymart Rosario and Isaac Amorin led the way from the free throw line and from the field to seal the victory. Glisson (5) and Rosario (2) combined for seven 3-pointers in the game.

Pearl City Chargers Head Coach Lionel Villarmia prepared his team to match up with Moanalua especially at the guard position. Coach Villarmia expressed the need to step up, stay out of foul trouble and shoot the ball. Everything came together at the right time for the Chargers.

“I guess tonight was the night," said Villarmia. "We know what they ran and we tried to match up the best we can. They have two top guards in Ola Brown and Kahani Pu'ulei-Auld. My guards stepped up without fouling. That was a big thing, we stayed out of foul trouble. Another thing is I challenged them in practice. You guys gotta shoot the ball. They did that tonight."

The team is set in a very positive mode at the moment as they make their way through the state championship tournament. Coach Villarmia is proud of the play of his big guys down in the post. Both Tyson Hickcox and Daicorri Briscoe fouled out after playing their hearts out last night but Coach Villarmia was encouraged by their toughness and efforts against the Menehune.

Other First Round Scores: 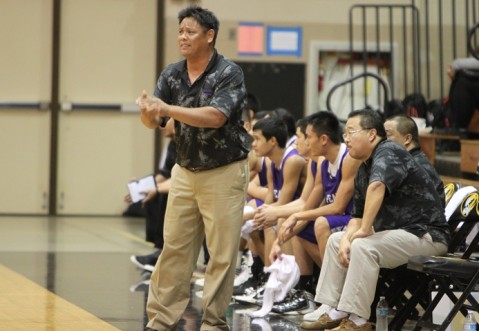 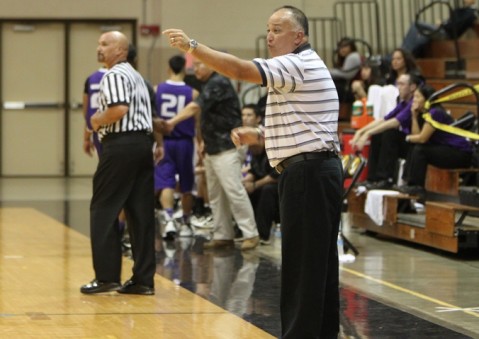 Moanalua Menehune Head Coach Greg Tacon sets up his offense after a timeout in the fourth period. 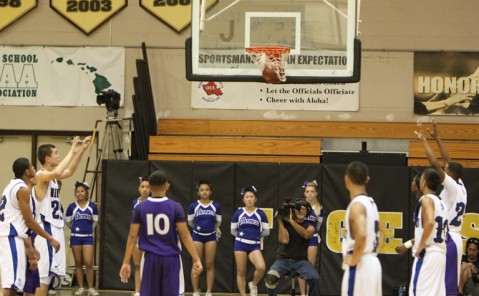 Pearl City's #10 Reymart Rosario watches his free throw drop through the net late in the fourth period. Rosario played a key role on offense pumping in 15 points including two 3-pointers. 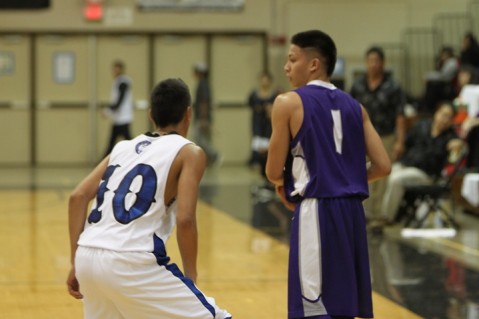 Pearl City's Isaac Amorin contributed 14 points for the Chargers and was instrumental down the stretch with his outstanding play on both offense and defense. Amorin is pictured here in the second period while being guarded by Moanalua's Kahani Pu'ulei-Auld.  Pu'ulei-Auld scored 7 points for the Menehune. 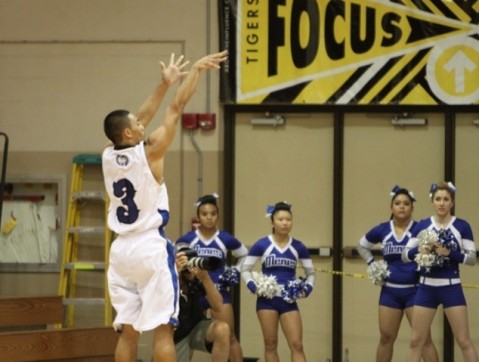 Moanalua's #3 Ola Brown led the Menehune with 18 points. Brown is pictured here scoring a basket in the first period against the Chargers. 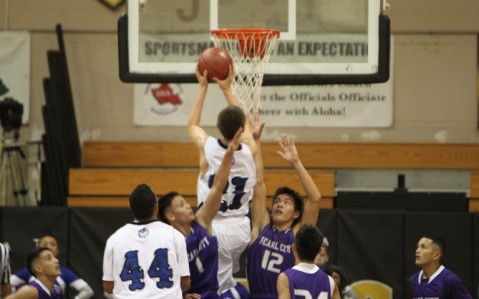 #21 Eliet Donley was a force at his post position for the Menehune. Donley splits two Pearl City defenders in the second period to score two of his 15 points in the game. Donley also scored one 3-pointer.