The Lady Sabers benefited from Palipti's outstanding performances from the mound and at the plate. On the mound, Palipti held the Lady Chargers to five runs on four hits with three walks and four strikeouts. From the plate, Palipti was red hot, hitting 2-2 with 4 RBI and 1 run scored.

Campbell picked up the bulk of their runs with a four run top of the second inning that knocked out Pearl City Lady Chargers starting pitcher Cydny Rivera and a  seven run fourth inning off of reliever Kristin Frost that put the Lady Sabers well out in front of the Lady Chargers 12-0. Pearl City got on the scoreboard after scoring three runs in the bottom of the fourth inning to trail Campbell 12-3.

The Lady Sabers scored three more runs in the top of the sixth inning to take a 15-3 lead. The Lady Chargers picked up couple runs in the bottom of the inning  but found themselves down 15-5 after six complete innings which enforced the 10-run mercy rule.

Cydny Rivera took the loss for Pearl City giving up four runs on three hits with one walk and no strikeouts in two innings of work. Kristin Frost pitched four innings in relief for the Lady Chargers allowing eleven runs on eight hits with three walks and no strikeouts.

Pearl City falls to 2-3 in league play while Campbell improved to 3-2.

The Lady Chargers will host Mililani on Thursday, March 14 with first pitch scheduled for 3:30pm. 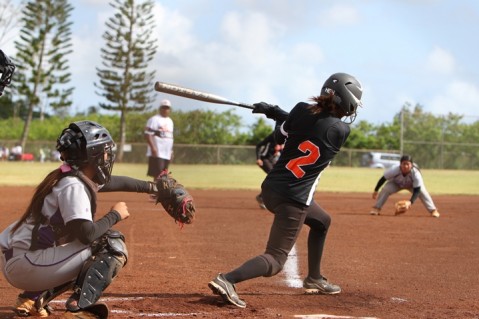 Campbell's #2 Tiana Rosario strokes an RBI single off of Pearl City starting pitcher Cydny Rivera that drove in Titania Akiona-Pasion from third base with two outs in the top of the second inning. The Lady Sabers went up 3-0 over the Lady Chargers. 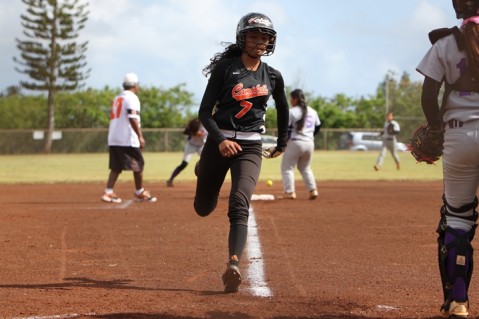 Titania Akiona-Pasion scores from third base on Tiana Rosario's RBI single in the top of the second inning. 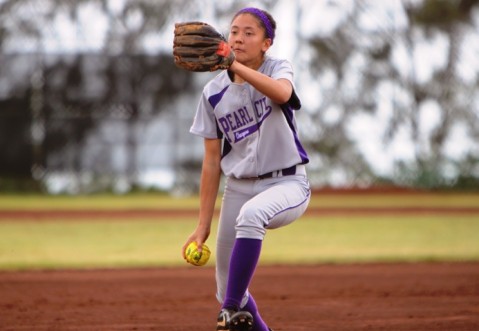 Kristin Frost pictured in relief for the Lady Chargers in the top of the third inning.