Sugimoto earned the win pitching eight innings, allowing two runs and ten hits. Sugimoto also scored the winning run in the bottom of the eighth inning on a game winning squeeze bunt by Justin Padilla with the bases loaded.

What made Sugimoto's efforts even more impressive was the adversity he battled through after a fifth inning rain delay and leg cramps that dropped him where he stood on the mound at the start of the fifith inning. Ten minutes later he was back on the rubber to face the Chargers batting order.

In the bottom of the sixth inning the Marauders tied the game at 1-1 off of Pearl City reliever Sean Milan on an RBI single by Justin Padilla that drove in Dylan Sugimoto from third base.

The Chargers one, two combination of Tanner Tokunaga and Matthew Tsutomi struck again in the top of the seventh inning to take the lead at 2-1 after Tsutomi drove in Tokunaga from third base on a sac fly to center field.

Pearl City brought in Tanner Tokunaga in the bottom of the seventh inning to close it out but Waipahu tied it up at 2-2 on a single run in the inning.

After shutting down the Chargers in the top of the eighth inning, the Marauders scored the winning run in the bottom of inning on Justin Padilla's bases loaded squeeze bunt that scored Dylan Sugimoto from third base.

Waipahu improved their league record to 2-1. Pearl City suffered their first league loss of the season and come in at 2-1.

The Chargers return to action against Mililani at home on Wednesday, March 13 with first pitch scheduled for 3:30pm. 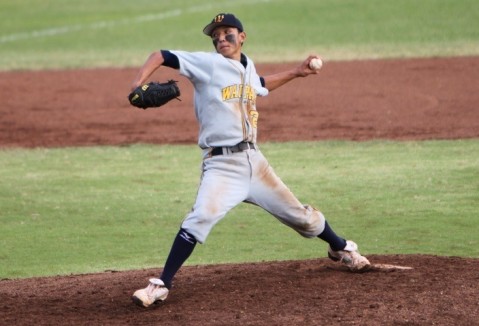 Dylan Sugimoto pictured on the mound for the Marauders in the top of the seventh inning.

Justin Padilla lays down the game winning squeeze bunt in the bottom of the eighth inning with the bases loaded that scored Dylan Sugimoto from third base. 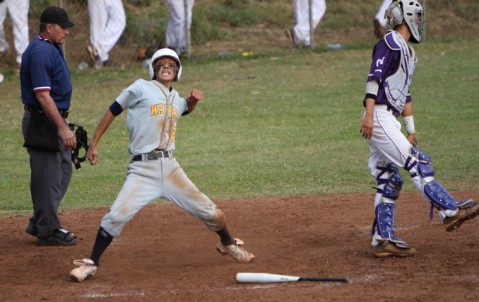