It was a combination of the will to win, the rush of adrenalin, a whole lot of heart, and some inspirational play and coaching that guided the Pearl City Chargers past the Waianae Lady Seariders in a thrilling come-from-behind 4-3 victory yesterday afternoon in OIA Red Western Division Varsity Softball at Pearl City High School.

Pearl City's Ariela Bali drove in the winning run on an RBI single that scored Nat Kang from second base with two outs in the bottom of the seventh inning to break a 3-3 tie and put the Lady Chargers in the win column after a tough come from behind battle against the Lady Seariders.

"I was kind of in a slump so it felt good," said Ariela Bali on driving in the winning run, "It helped me gain more confidence. I was ready. The pitch was kind a low but down the middle and I like that because I can drive it."

"I feel like I gave it my all for the team," said Nat Kang. “I told myself this morning that we're going to win today and this is going to be our ticket to the playoffs and to show how we stand. Today I tried to stay relaxed like coach. I tried to clutch up and at least just bring them in and do it for the seniors."

Pearl City Lady Chargers Head Coach Keoke Behic commented on his team positioning themselves for the playoffs and his strategy for the remaining regular season games against Campbell and Mililani. Also, on how his team rallied around relief pitcher Kristin Frost after losing the lead to Waianae entering the final inning. Frost shut down the Lady Seariders in the top of the seventh inning and earned the win after the Lady Chargers rallied from a run down in the bottom of the seventh inning to pull out the victory.

"The win guarantees us at least the playoff spot in the West and you know from the very beginning that's all we asked," said Coach Behic. "That was our main goal was just to make the playoffs. We have two and a half more weeks left before the playoffs and hopefully we can continue to peak and that's what we're trying to do and also get some players healthy. Hopefully good things will happen. This was a good situation for Kristin Frost to come in and close the game. She lost the lead but the team clutched up. Overall that kind of game is a good confidence booster. Obviously we have Campbell and Mililani coming up next. That really doesn't matter to me. We're just going to prepare for the playoffs and get some people healthy. We're going to try and execute our plan."

Coach Behic also commented on the play of the game winning performances of Ariela Bali and Nat Kang;

"Ariela is a junior and she comes to practice and works really hard," Coach Behic said. "If you see whenever she gets out she hustles back into the dugout. She's a very, very hard worker and you know she paid her dues. She was patient and waited for an opportunity to start and now she's taking of advantage of it and obviously came up in the end. That was clutch for us."

"Nat didn't have a batting average until today. She just broke out of it. Those two girls, I'm so proud of them. They deserve it more than anybody else. Those two deserve what happened to them today. I hope they can take this experience because they're going to remember this for the rest of their lives.”

scoring position with two outs and Ariela Bali at the plate. Joe-Ann Rapoza

occupies first base after being walked. Kang pictured giving the signal to

Bali that now's the time to win the game. Both runners advanced a base on

a pass ball at the plate. Bali came through with the game winning RBI single

that scored Kang from third base. 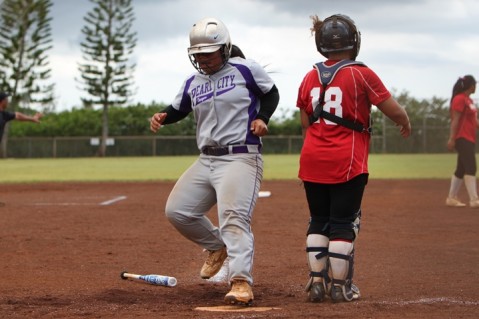 by Ariela Bali's RBI single in the bottom of the seventh inning.

to defeat the Waianae Lady Seariders 4-3 in the bottom of the seventh inning. 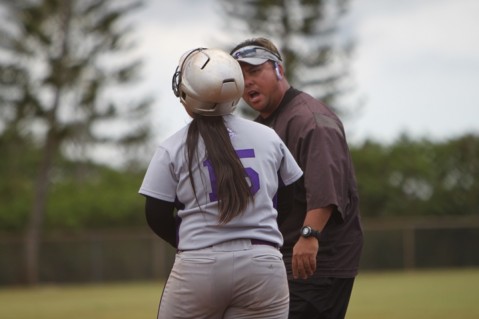 he congratulates Nat Kang after she scored the winning run. 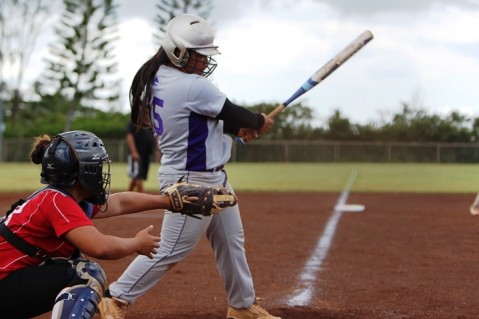 scored. Kang pictured driving in Hope Casarez from second base on an

RBI single in the bottom of the seventh inning that tied the game at 3-3. 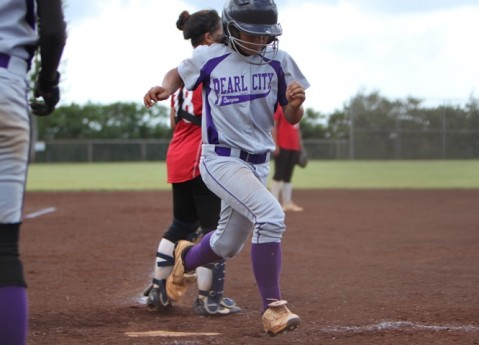 in the bottom of the seventh inning. 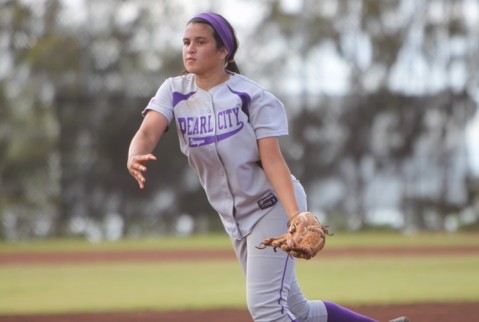 Cydny Rivera had a solid pitching performance for Pearl City against

Waianae. Rivera held the Lady Seariders to no runs and two hits in three 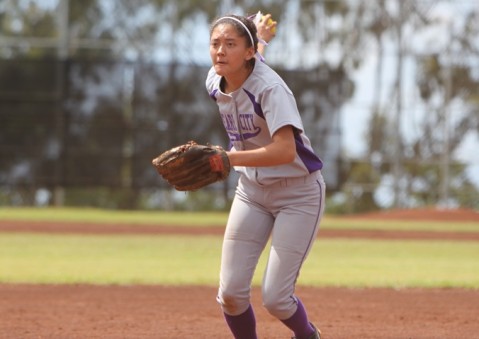 Kristin Frost earned the win for the Lady Chargers in four innings of work.

but came back strong to shut down Waianae in the top of the seventh inning. 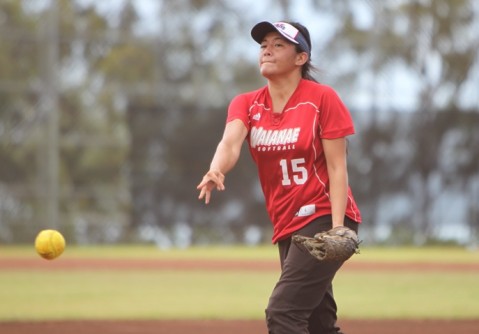 to the Lady Chargers.