Pearl City bats belted out sixteen hits to power the Chargers past Roosevelt 12-5 in the first round of the Oahu Interscholastic Association Red Division Varsity Baseball Championship Tournament played at Pearl City High School on Wednesday.

The Chargers move on to the championship quarterfinals against OIA Eastern Division runner-up Kailua at Kailua High School this afternoon at 3:30pm.

Roosevelt jumped on Pearl City starting pitcher Tanner Tokunaga for five runs in the top of the first inning to take a 5-0 lead. The Roughriders got on the scoreboard on an RBI single by Mika Caris that scored Kainalu Pitoy from third base. Aaron Emoto walked with the bases loaded scoring Edison Sakata from third base. Next batter Dustin Tsukano scored Mika Caris from third base on a sac bunt. Reece Okura hit a two RBI single to right field with two outs scoring Michael Matsuoka and Aaron Emoto. Roosevelt took a 5-0 lead. Kainalu Pitoy grounded out to end the inning. The Roughriders sent ten batters to the plate in the inning.

The Chargers struck back in the bottom of the first inning scoring six runs off of Roughrider starting pitcher Reece Okura. Tanner Tokunaga led off the bottom of the first inning with an infield single. Colby Hirano stroked a single into center field advancing Tokunaga to third base. Hirano moved to second base after avoiding a rundown between first and second. Matt Tsutomi hit an RBI single scoring Tokunaga from third base. Kyle Tom walked to load the bases. Next batter Sean Milan hit a two RBI single to center field scoring Hirano and Tsutomi. Pearl City took a 3-0 lead. Shaye Higa hit a ball in the infield that was mishandled allowing Tom and Milan to score. Higa took second base on the play. Pearl City tied the game at 5-5. Dane Kaneshiro walked to put runners on first and third. Next batter Jason Komoda hit a grounder forcing out Kaneshiro at seond base. Higa advanced to third base. Next batter Tanner Tokunaga hit an RBI single that scored Higa from third base. Pearl City took a 6-5 lead. Komoda got tagged out at third base for the third out.

The Chargers picked up one run in the second, two runs in the third, and three runs in the fourth holding the the Roughriders to no runs after the five runs scored in first inning.

Mika Caris led the Roughriders hitting 2-4, with a 2B, RBI, Run. 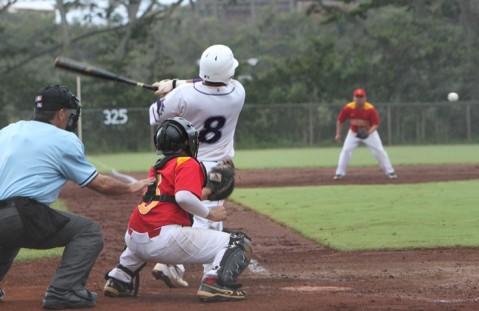 Kyle Tom had a productive day at the plate for the Chargers hitting 2-3 with one run scored. 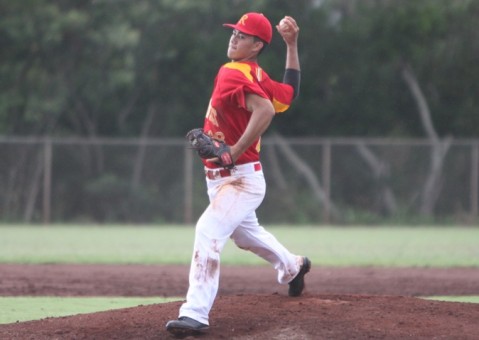 Mika Caris pitched 3 1/3 innings in relief for the Roughriders.