Community volunteers representing the Pearl City Lions Club and Mana Loa-Nimitz Lions Club continued their combined efforts in the fight against neighborhood graffiti on Saturday, May 25 at the corner of Waimano Home Road and Komo Mai Drive.

Lion’s club members met bright and early Saturday morning armed with paint rollers and several gallons of paint to tackle and paint over graffiti that stretched about one hundred yards north bound on Waimano Home Road. The anti-graffiti painting project started at 7:30am and was completed by 8:45am.

"The City & County provides the paint and they give us some of the painting supplies," said Aoki. "Home Depot always gives us a lot of stuff and sometimes City Mill. HPD has also been very supportive. They know what we're about. They call us up out of the blue once in a while to do stuff, so they've been really helpful."

The Pearl City Lions Club and Mana Loa-Nimitz Lions Club have a busy community service schedule planned for the upcoming summer months with clean ups and more graffiti painting projects on the agenda.

"The first big event will be in June at King Intermediate," Aoki said. "Seven or eight Lions Clubs with about forty people will put together wooden benches and paint at least three restrooms. The last Saturday in July will be the Farrington High School Paint Out, District 50 Project. Hopefully we can get eighty to one hundred Lions out there. We'll be painting graffiti around the school, cleaning the sidewalks, and painting the freeway on ramp. The next District 50 Project, probably in August, will be the Keeamoku Street Overpass. We'll be painting the overpass going across the freeway and some of the side streets, painting over the graffiti. That territory is the Ala Moana Lions so I need to talk to them. July 27 is the Kapalama School landscaping and that project is a Weinberg project. The coordinating club is the Kalakaua Lions. Three or four clubs will be involved in that one. We have four big projects planned for the summer." 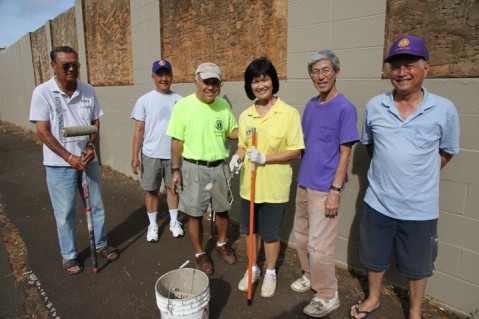 on Saturday, May 25, 2013 after completing their anti graffiti painting project on Waimano Home Road