Pearl City blasted past Waialua 17-0 to advance in the Hawaii Little League Majors District 7 Tournament on Saturday, June 29  at Central Oahu Regional Park (CORP) in Waipio. The game was called after 3 1/2 innings due to the 10-run mercy rule.

Pearl City pounded out 13 hits against Waialua pitching. Waialua was held  to one hit against a strong Pearl City pitching rotation.

Matthew Valencia and Chaesten Chon combined for the win for Pearl City. Chon entered the game in relief of Valencia with one out in the top of the third inning.

Waialua was eliminated from the double elimination format tournament with the loss to Pearl City.

Pearl City continues its quest to climb out of the loser's bracket with a match-up today against Waipahu. First pitch is scheduled for 12:00pm at CORP. Saturday's big win over Waialua even their record at 1-1 in the tournament. Pearl City dropped Friday's opening round game to Ewa Beach 7-6 in 7 innings.

Carter Hirano led off the game with a single to centerfield. Chaesten Chon hit a single moving Hirano to third base. Christian Pacrem popped out tofirst base for the first out. Nohealani Hee hit a 2 RBI single scoring Hirano from third base and Chon from first. Hee hustled to second base on the play. Next batter Matthew Valencia grounded out for out number two. Hee advanced to third base on the groundout. Caleb Young slammed an RBI  ground rule double to left field scoring Hee from second base. Pearl City took an early 3-0 lead. Young moved up to third base on a pass ball at the plate. Next batter Mayson Foumai grounded to end the inning.

(Pearl City made a pitching change in the top of the third inning bringing in Chaesten Chon in relief of Matthew Valencia with one out.)

Michael Yanagi led off the inning with an infield single. Carter Hirano hit an RBI double into centerfield scoring Yanagi from first base. Next batter Chaesten Chon blasted a 2-run homerun over the centerfield fence scoring Hirano from second base. Pearl City increased their lead to 13-0. Next batter Christian Pacrem hit a single into right field. Nohealani Hee slammed an RBI triple into leftfield scoring Pacrem from first base. Next batter Matthew Valencia got on base with a single. Caleb Young followed with  a 3-run homerun blast to centerfield scoring Hee and Valencia. Pearl City took a 17-0 lead. Next batter Mayson Foumai struck out for the first out.  Waialua made a pitching change bringing in right hander Azure Agricula in relief of Kyler-Dane Dicion with one out and no runners on base. Next batter Joey Casarez struck out but reached first base safely as the ball got past the catcher at the plate. Michael Yanagi grounded out to third base for the second out of the inning. Next batter Carter Hirano popped out to left field  to end the inning.

Pearl City scored seven runs on six hits with one runner left on base.

*Waialua got a base hit from Kyle-Dane Dicion in the top of the fourth inning to break up a no hitter. 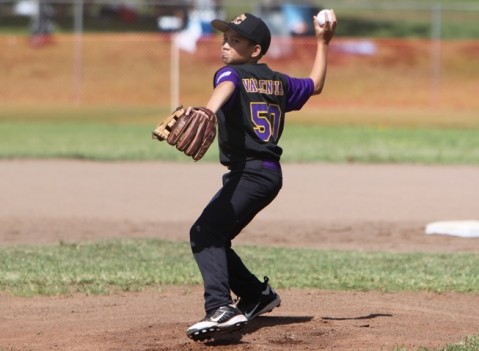 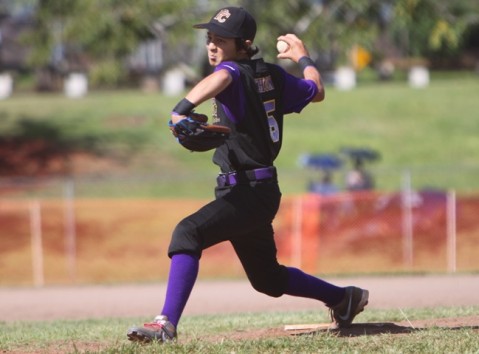 Chaesten Chon pitched 1 2/3 innings in relief of Matthew Valencia allowing no runs, one hit, with three