Pearl City advanced in the Hawaii Little League Majors District 7 Tournament with a 20-2 blowout over Waipahu on Sunday, June 30 at Central Oahu Regional Park (CORP) in Waipio. The game was called after four complete innings due to the 10-run mercy rule. It was the second win in a row for Pearl City that ended early due to the 10-run mercy rule. Pearl City beat Waialua 17-0 on Saturday.

Jonston Viloria and Javin Barcenilla took the mound for Waipahu.

With the win over Waipahu, Pearl City advances in the tournament and will face MKH today at CORP with first pitch scheduled for 3:00pm.

Pearl City is 2-1 in tournament play. After an opening round 7-6 loss in extra innings to Ewa Beach, Pearl City has outscored their opponents 37-2.

Waipahu (1-2) was eliminated from the double elimination format tournament with the loss to Pearl City.

Caleb Young got on base with a one out single into centerfield off of Waipahu starting pitcherJonston Viloria.  Next batter Joey "Cello" Casarez hit an infield grounder moving Young to second base. Brayden Nomura came is a pinch runner for Young at second base. Michael Yanagi got hit by a pitch loading the bases with one out. Cade Halemanu hit an RBI single scoring Nomura from third base. Next batter Carter Hirano stroked a 2 RBI double to right field scoring Casarez and Yanagi. Pearl City took a 3-0 lead with one out. Chaesten Chon got on base with a bunt single to load the bases. Christian Pacrem popped out for the second out of the inning. Halemanu scored the fourth run of the inning on a pass ball at the plate. Hirano scored on a steal from third base. Rayson Carriaga popped out to the catcher for the third out.

Pearl City scored five runs on three hits with one runner left on base.

Caleb Young got on base with an infield grounder with one out.Next batter Cello Casarez flied out to right field for the second out. Young advanced to second base on a pass ball at the plate. Michael Englar got on base with a single into right field. Young moved up to third base. Pearl City had runners on first and third with one out. Englar took second base on a steal. Cade Halemanu hit an infield grounder scoring Young from third base. Englar scored from third base on an RBI single by Carter Hirano. Chaesten Chon lined out to center field for the third out.

Waipahu scored two runs on to two hits with two runners left on base. 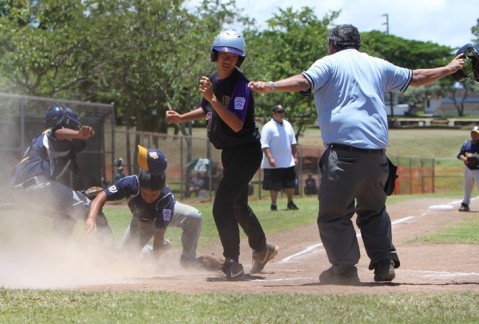 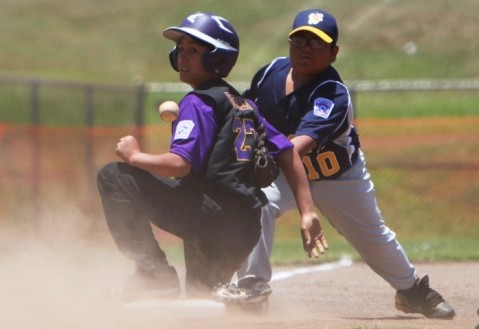 Pearl City's Christian Pacrem slides in safely at third base in the top of the third inning. Pacrem would