The lead went back and forth three times before Pearl City's explosion at the plate in the bottom of the fifth inning that resulted in Pearl City breaking a 4-4 tie and taking a commanding 13-4 lead heading into the top of the sixth inning.

Pearl City's Carter Hirano exhibited exceptional power at the plate belting a 2 run homerun over the centerfield fence in the bottom of the fourth inning that drove in Michael Englar and gave Pearl City back the lead at 4-3.

MKH sent Isaac Badua, Jonah Zembik, and Kala'e Holt to the hill in the loss to Pearl City.

Pearl City advances to the next round of the tournament and will take on Ewa Beach on Tuesday, July 2 at CORP. First pitch is scheduled for 3:00pm. It will be the second meeting between the two ball clubs in the double elimination tournament with Ewa Beach pulling out an opening round 7-6 victory in extra innings on Friday, June 28.

Since the opening round loss to Ewa Beach, Pearl City has beaten Waialua 17-0, Waipahu 20-2 and MKH 13-4 to make it to the rematch with Ewa Beach.

The winner of the Pearl City (3-1) vs. Ewa Beach (2-1) match-up will reach the tournament championship with the task of beating Waipio (2-0) two games in a row for the championship title. Ewa Beach lost to Waipio on Sunday, June 30 to drop into the loser's bracket.

Kala'e Holt reached first base to lead off the game in the top of the first inning. Kamalii Silva forced out Holt at second base with an infield grounder. Next batter Isaac Badua struck out for the second out. Silva hustled around to third base on the play. Silva scored the first run of the ball game on a pass ball at the plate. Chon walked the next batter. Dane Okamura grounded out for the third out.

MKH scored one run on no hits with two runners left on base.

Carter Hirano led off the inning with a bloop single to centerfield. Chaesten Chon lined an Isaac Badua pitch right back to the pitcher. Badua was injured and not able to continue and left the game. Jonah Zembik was called into to action in relief of Badua. Pearl City had runners on first and second with no outs. Christian Pacrem grounded out for the first out. The runners moved up to second and third. Hirano scored on a pickoff attempt at third base that missed its mark. Pearl City tied the game at 1-1. Rayson Carriaga stroked a ground rule double to leftfield that scored Chon from third base. Pearl City took the lead at 2-1. Shawn Iwane struck out for the second out. Next batter Caleb Young popped out for the third out.

Pearl City scored two runs on three hits with one runner left on base.

Kala'e Holt walked to lead off the inning. Kamalii Silva hit a grounder that forced out Holt at second base. Kamakani Motas hit a single to leftfield moving Silva to second base. MKH had runners on first and second with one out. Next batter hit a grounder to the third baseman who made a wild throw to second base allowing Silva to score and tie the game at 2-2. Zembik grounded out for the second out. E. Ramiscal scored from third base on a pass ball at the plate. MKH took back the lead 3-2. Dane Okamura struck out for the third out.

MKH scored two runs on one hit with one runner left on base.

Pearl City made a pitching change bringing in Cade Halemanu in relief of Chon to start the top of the fourth inning.

Mayson Foumai grounded out to lead off the inning. Next batter Brayden Nomura went down on strikes. Michael Englar stroked a two out double to left-centerfield. Carter Hirano ripped a 2 run homerun that scored Englar from third base tying the game at 3-3 and regaining the lead at 4-3. Next batter Chon walked with two outs. Christian Pacrem popped out to leftfield for the third out.

Pearl City scored two runs on two hits with one runner left on base.

Micah Thompson struck out to lead off the inning but beat the throw to first baseafter the catcher dropped the ball on the strike three count. Pearl City made a pitching change bringing in Caleb Young in relief of Cade Halemanu with no outs and one runner on base. Next batter Kamalii Silva hit a single down the third base line putting runners on first and second. Kamakani Matos moved the runners up to second and third with a sac ground out. Next batter Aidan Koanui walked to load the bases. Jonah Zembik hit a grounder off of the shortstop that allowed a run to score that tied the game at 4-4. Young got the next two batters on a strikeout and a ground out to end the inning with the bases loaded.

MKH scored one run on two hits with three runners left on base.

Nohealani Hee led off the inning with a single into rightfield. Cade Halemanu hit a fly ball into leftfield that was bobbled moving Hee to second base and Halemanu to first base. Rayson Carriaga reentered the game to pinch run for Halemanu at first base. The runners moved up on a pass ball at the plate. Caleb Young hit an RBI single that scored Hee from third base breaking the 4-4 tie and putting Pearl City in the lead at 5-4. Cello Casarez hit an RBI single to left-centerfield scoring Carriaga from third base. Next batter Michael Yanagi got hit by a pitch. Michael Englar hit a ground rule double to leftfield scoring Young and Casarez. Pearl City increased their lead over MKH to 8-4. MKH made a pitching change bringing Kala'e Holt in relief of Jonah Zembik with no outs and two runners on base. Carter Hirano stepped up to the plate and hit a 2 RBI double to centerfield scoring Yanagi and Englar. Chaesten Chon struck out for the first out. Christian Pacrem hit an RBI single scoring Hirano from second base. Next batter Rayson Carriaga walked putting runners on first and second with one out. The runners moved up to second and third on wild throw to second base. Shawn Iwane flied out for the second out. Caleb Young hit a 2 RBI single scoring Pacrem and Carriaga. Mayson Foumai struck out to end the inning.

Pearl City scored nine runs on eight hits with one runner left on base.

Nohealani Hee came into the game to close out the top of the sixth inning in relief of Caleb Young. 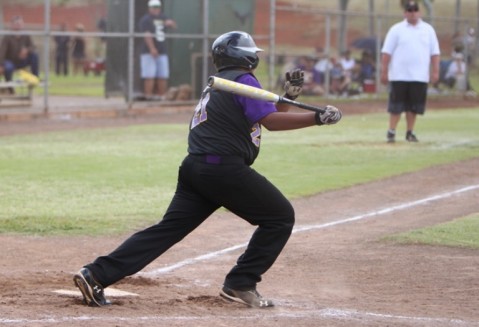 Caleb Young is a force at the plate for Pearl City. Young is pictured here ripping an RBI single in the

Pearl City in the lead 5-4. Young also drove in runs 12 and 13 in the inning with an RBI single that scored 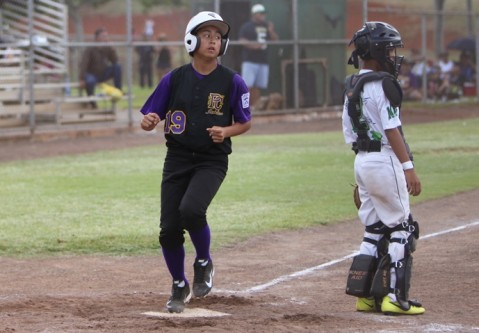