The students participated in different levels of robotics competition with the engineering skills that they learned throughout the six-week term. Students in the Level I Class – Mechanical: Mindstorms were involved in building a series of progressively more challenging robotic designs, followed by an introduction to electronics, and programming mathematics.

Level 2 Class – Mechanical: VEX  students in the Academy were introduced to the basics of robotic construction, electronics, and programming mathematics.

In its first year, the Lehua Summer Robotics Academy's partnership with SPAWAR and NDEP provided much needed funding for the program as well as expertise in the field of robotics from engineers at Pearl Harbor. SPAWAR also introduced a program that provides scholarships to the University of Hawaii  in the field of engineering through the principles of the STEM (Science, Technology, Engineering, and Mathematics) Program.

"The 2013 Lehua Summer Robotics Academy is a partnership with SPAWAR from the Department of Defense. They provided $5000 dollars’ worth of equipment that we did not have. It was their idea to offer this to the schools and they asked us to host this program. We could not have done it without their support. They are looking to build a program from elementary through high school. The students are excelling. It's good to see them work and interact with students from other schools. We have seven schools here today, six from the Leeward District, and they are all enjoying themselves. What got us really interested was when Rear Admiral Ponds asked for partnerships between the Department of Defense, which includes SPAWAR, and the schools. Nick Kamin from SPAWAR has been instrumental in getting engineers here. Every day, Monday through Thursday, we have an engineer volunteer from Pearl Harbor. Our two teachers, Jennifer Kim, STEM research teacher from the district and Michael Wright, our teacher here at Lehua Elementary are both running the program. That's been a real plus for Pearl Harbor to have engineers working with students and for us to have engineers here. It's a win, win for everybody. It was Rear Admiral Ponds idea to start these strong partnerships, especially for STEM activities with public schools. They have a scholarship too. If a student is in a Robotics team in school, they could apply for a scholarship at the University of Hawaii for four years in engineering and Pearl Harbor will pay for it. They can also be a part of an apprenticeship program. That is big. That's how much they are committed to having home grown engineers here in Hawaii and they're committed to paying for their college scholarships."

"It's been really a great experience. The kids are doing some amazing stuff. What I really like is all the schools working together. Pearl City High School has a lot of students here helping mentor all the elementary students and they just are having a fun time. I think it's really engaging them with science and technology. The high school has starting building a partnership with several of the elementary schools. It's a part of what the high school is starting to work on, sending mentors to work with the elementary school students. They work really well together. This is the best I've seen them collaborating. I really like it. The elementary schools are starting their robotics, Highlands Intermediate has a great program and I think the whole complex is emphasizing robotics and it's building the right skills for our kids.  Hai Nguyen is the new PCHS advisor and he's got the right balance of letting the kids actually run the show and problem solve. He really enjoys it and has the passion for it. He's the one that's going to grow the program."

"It's good to see them start early to build that interest in STEM and Robotics, especially now since it's kind of the big thing here. I guess it kind of fits into what our goals are as a complex to hopefully become that hub of robotics that everyone wants to come to the Pearl City complex and build it up from elementary all the way up to the high school level. There are a lot of people that put in so much time and effort into the program. The support has been tremendous. The kids just come out and they give it their best. To have something like this to help the younger kids build that interest in STEM, and for the high school kids being interested in engineering and it being robotics related, will help them serve as role models for all the kids to see what kind of options that they have. I can see potential. There are a lot of skills that they will learn throughout the years and hopefully they keep pushing at it. Whether it’s at Lehua or at their elementary school and at Highlands Intermediate and continuing on in high school. It's not just for the competition. It's more for their careers, their future and building that interest now so that they'll come in ready to go. Its fun to win, but I don't think that's the main reason why we're here. It's getting ready for their future, because they need to start now. If they can start it now, they will get more out of it in the end. At the high school, considering where we've been, and to be where we're at now, is just incredible. The seniors are the ones that started it. They've been through the dark times and the bad times. They in themselves see that all we have to do is put in this little time and get that support here and there. It really is the students that drive this program and to be a part of that success in their three years is a reward for them. They also want to leave that legacy for the future of Pearl City High School Robotics and Pearl City itself." 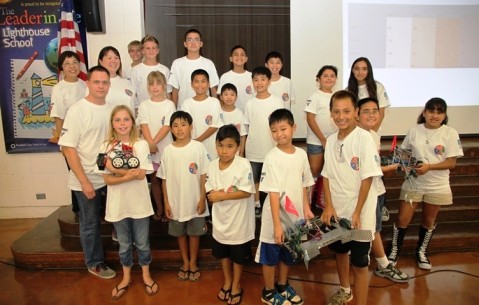 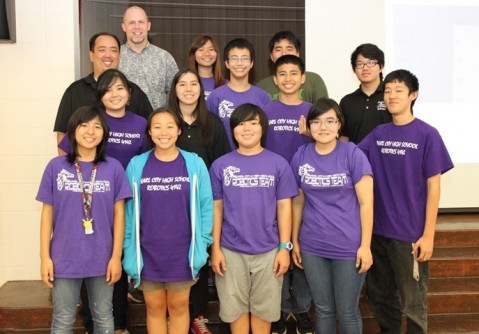 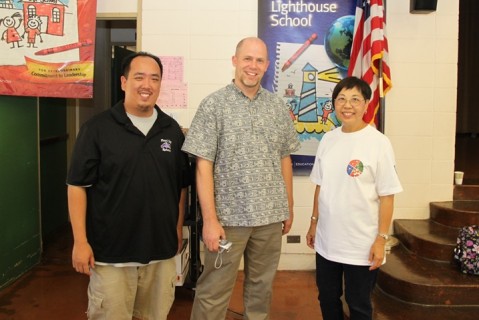 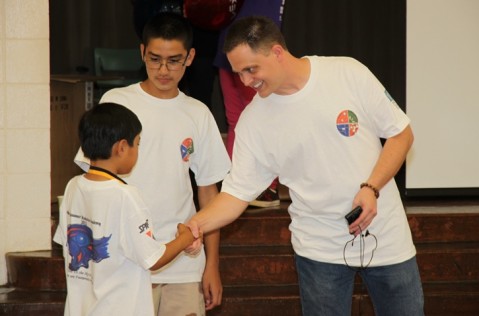