The work was organized and completed as a part of Troop 75's Austin Morishita's Eagle Scout Project. Morishita brought together his fellow Troop 75 members, leaders, and ohana to bring the sign project to fruition. Morishita worked closely with Pearl City Foundation Executive Director Breene Harimoto from start to finish.

“I feel very honored that I could have been a part of this," said Austin Morishita. "I’m so happy that I could bring Mr. Harimoto’s idea to life.  The entire dog park was his idea. I just made the sign for him. A lot of credit goes to Mr. Harimoto. I’m just so proud of being a part of this project. I would also like to thank all the supporters, parents and boys of Troop 75, without them I don’t think this project would have been done anywhere to where it is today. It’s absolutely fantastic."

“We’ve been planning this for years and finally it’s becoming reality thanks to the Boy Scouts doing the sign," said Breene Harimoto, Pearl City Foundation Executive Director. "Now we’re just trying to get the fence in and soon as that’s done we’re set. It was all the Boy Scouts contacts. They did everything. They did all the work here. I only told them what letters to put on and they did all the work.  As soon as the fence comes in we’ll put up a banner on this external fence announcing a community meeting. We’re going to ask all the dog owners who are interested in using the facility to come to our meeting and we’ll get their input in to how to create the rules and how to get started. After that, we’re going.  I really want to thank the Boy Scouts Troop for doing all this work and getting it going because we’ve been talking about it for so many years. I think we’re going to generate a lot of interest because there are so many dog owners as you know, in this area and I think they’re all going to be benefitting from this.  We hope it will be a successful dog park in a sense that it will be clean and it will be well used."

Troop 75 Scoutmaster Al Morishita is proud of the work done by the boys and supporters and the efforts made to complete the project that will not only set the ground work for a new dog park opening soon, but will also move his son Austin Morishita one step closer in attaining his goal of reaching the rank of Eagle Scout. Morishita also gave thanks for the relationship built between Troop 75 and Breene Harimoto at the Pearl City Foundation's Momilani Community Center.

“This is my son's Eagle Project," said Al Morishita. "I spoke to Breene and he had so many different projects he wants done around here and he told me about the dog park.  I asked him if he needed a sign or anything and he said yes. It took about three months planning and lining up all the material and all the donations. It’s all part of the Eagle Projects. Everything was donated. It took two weekends to complete the project. I would like thank all the boys for all their hard work and I also have such supportive parents that help me out a lot. Of course thanks to Breene for allowing us to do this project and for letting use the Momilani Community Center for our Troop meetings.  I wanted to do something for him.” 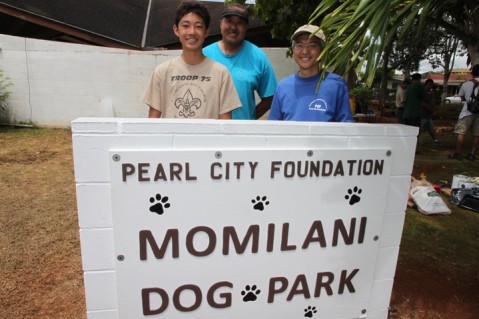 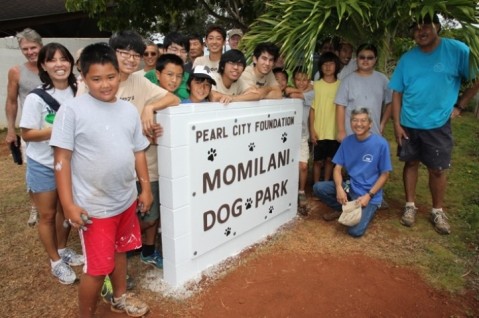 on Sunday, July 28, 2013 upon completion of the new Momilani Dog Park sign. 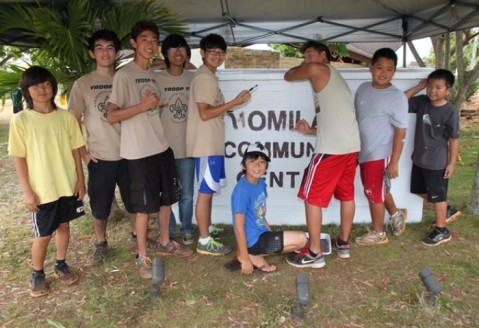 signs the Scouts worked on as a part of Austin Morishita's Eagle Scout Project. 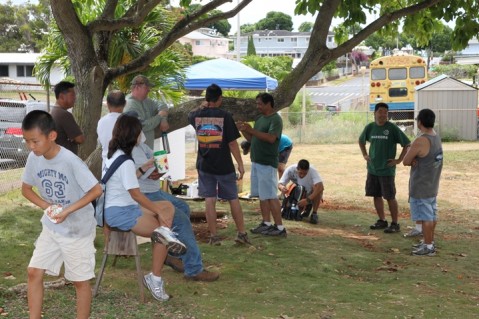