City Councilman Breene Harimoto who represents Pearl City introduced the resolution to rename the park after Mr.Ushiro, and followed through with the process until its passing on Wednesday during the city council's regular meeting held at Leeward Community College in Pearl City.

After hearing testimony by several Pearl City community leaders, the full city council took the resolution to a final vote and passed it unanimously in front of a grateful, and very supportive group of Shige's friends, community leaders, and Ushiro family members which included Shige's wife Elaine.

"I feel so touched. Actually it’s all about the people who helped him. Manana is where it all started with his involvement with the community and everything, especially the park. It was very special. He was actually the one that got the swimming pool. He initiated the project with the help of many. Now with the park, the people who pass it, and the ones who supported him, when they see it they will know that they were a part of it. Shige and the members of the community who served with him kind of stimulated and reactivated the spirit of Pearl City. Shige’s children and grandchildren will be so proud having the park renamed after him.

The park represents all of the hard work that the people put into it, not just Shige alone. He couldn’t of done it by himself. It was so nice to have Councilman Harimoto introduce the resolution because Shige worked with Breene at the Pearl City Community Association and Pearl City Foundation. They worked together in so many things. Albert Fukushima, who was very instrumental in getting people at the Manana Community Association continued what Shige started. I'm so happy that he is still a leader at Manana.

.I’m very thankful for everybody who was so supportive. They all came out and it’s such a heartwarming thing. Too bad Shige wasn't here."

"It’s really a WOW situation. He deserves it. Whatever they can do for him, he deserves it. He’s an outstanding, very exceptional person. Pretty soon we’ll see the sign up and everything. I want to see the sign before I really say thank you."

“I’m glad that we’re going to honor him by renaming Manana Neighborhood Park. I got to know him when I first joined the board in 1970. I was elated to see the resolution passed today. I didn’t think that they would oppose it because of the support that he has from the community. I think it all came out the way I expected it today and I’m very happy about it.”

I was given an opportunity to serve with Shige Ushiro as a Board Member and Officer for both the Pearl City Community Association and Pearl City Foundation.  He was truly committed to serving his neighborhood community of Manana as well as our entire Pearl City community as a volunteer. He was also an award winning career educator.

Shige’s commitment to serve, exceptional organizational skills, senior leadership, and years of experience, brought respect and admiration from fellow board members as well as from other community organizations, schools, businesses, and government agencies that he worked closely with to enhance the lives our residents while building a stronger community.

As the web editor for MyPearlCity.com, I personally witnessed and reported on Shige’s work in our community from organizing and volunteering at the annual Manana Neighborhood Park Easter Egg Hunt, to volunteering in support of Manana Elementary School, to presenting PCCA annual scholarships to deserving Pearl City High School seniors, as well as awarding annual monetary donations to Pearl City District Complex Schools. Shige was always there for our keiki and students.

Shige was also a longtime parishioner at Our Lady of Good Counsel Church in Pearl City. I truly believe that his faith enhanced and blessed his gift of giving. A gift that he shared with an open heart and with compassion to help his neighbors and their ohana. I also believe that Shige continues to share his blessed spirit with those in the afterlife.

Honoring Shige Ushiro with the passing of Resolution 13-153 by the city council will serve to perpetuate his true legacy of giving upon generations to come as they enjoy time spent at the Shige Ushiro Manana Neighborhood Park with family and friends.

Thank you very much for your support in renaming the Manana Neighborhood Park to Shige Ushiro Neighborhood Park. Behind Shige’s name are all of you who with him and made things possible. He could never have accomplished much without your help.

Thank you for sharing your day for Shige. The Park will be a symbol of the friendship and togetherness you shared in working for our community. Shige cherished and appreciated all of you. Mahalo. 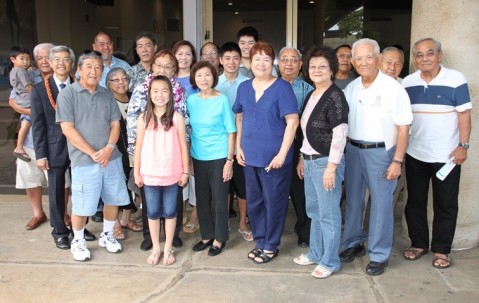 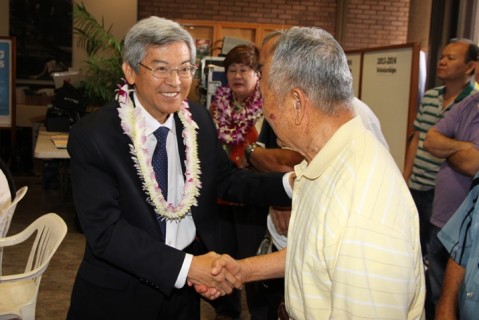 Mission accomplished! Councilmember Breene Harimoto shakes the hand of Bob Kubo after the 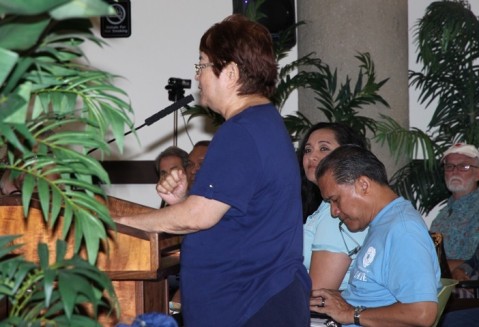 Shige Ushiro (in blue raincoat) is pictured doing what he loved the most, serving his community.

the Manana Neighborhood Park which will be renamed in his honor.

Photo courtesy of the Ushiro Family

Your honor and legacy will live on in the park that bears your name…..