Representatives from the Pearl City Shopping Center (PCSC) Merchants Association presented Momilani Elementary School Principal Mrs. Doreen Higa with a donation of 10 – $100.00 PCSC gift certificates in front of the Momilani faculty, staff, student body, and parents who were in attendance on Thursday during the schools first assembly of the new school year.

Donations to Pearl City District Complex Schools by the PCSC Merchants Association are presented annually at the beginning of the new school year as a gesture of appreciation and a way of giving back to the community for supporting the businesses at the Pearl City Shopping Center.

Their success opens the door for the PCSC merchants to identify and fully support the needs of thousands of Pearl City students as their schools face tough economic times that continue to profoundly impact school budgets and important school programs. 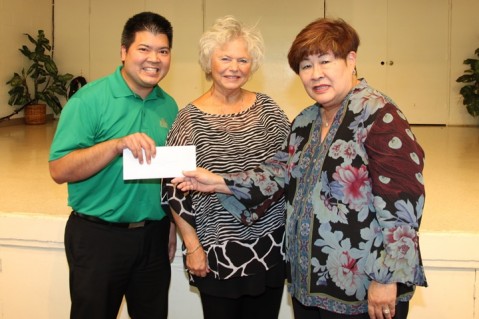 Certificates on Thursday, August 15, 2013 during an assembly held in the school cafeteria. 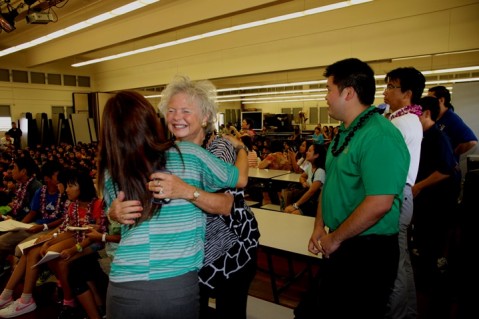 received a warm welcome, a lei, and a big thank you from the Momilani Elementary School staff,

student body, and parents in attendance on Thursday, August 15, 2013.

Sheri Rolf is pictured receiving a thank you hug from a Momilani Elementary School staff member.