The Hawaii Lions Foundation received a $10,000 Grant from the Weinberg Friends Program that was funded by the Harry & Jeanette Weinberg Foundation, Inc. on Saturday, August 24 following a combined District 50 Lions Club service project at Kapalama Elementary School in Kalihi.

The service project was led by the Kalakaua Lions Club with supoort from the following Lions Clubs:

In order to receive the $10,000 Grant from the Weinberg Friends Program, a minimum of 25 Lions Club volunteers were required to work four hours each on the Kapalama Elementary School service project. Lions club volunteers worked from 8am-12noon clearing areas for the students to plant a vegetable garden near the school cafeteria and flower bed that featured "K A P A L A M A" on the hillside also near the school cafeteria.

Hawaii Lions District 50 Governor Mark Mizuno from the Haleakala Lions Club on Maui was also on hand to participate in the Kapalama Elementary School workday and check presentation ceremony.

"Since I live on Maui, every time I get a chance to come to Oahu we look for all the projects that are done here. I went to Pearl City this morning and Pearl City was cleaning up along the Pearl City Industrial area. I heard that this project was going on over here and that $10,000 from the Weinberg Foundation that's going to the Hawaii Lions Foundation is just awesome. This supports our Hawaii Lions Eye Bank and it supports our vision and hearing programs throughout the state. So we're just really excited about it and my motto for this year is, "Together We Serve" and as you can see by this group over here today, they served, and they did it together. A whole bunch of clubs got together. This is what we do on Maui, and that's why that was my theme this year. To get all these Lions to work together and do bigger projects, and do more things for our communities, and it's working. Pearl City is more beautiful today because of what the Lions have done. The school is more beautiful today for what the Lions have done so I'm really excited."

"The beneficiary for today's project will be the Hawaii Lions Foundation which will benefit with eye glasses and hearing aides for the needy. Bob Lee who is the president of the foundation is here, he's helping and working hard this morning. We will present Bob with the $10,000 check from the Weinberg Friends Program.  I would like to thank the Pearl City Lions Club, Mana Loa-Nimitz  Lions Club and all the different clubs and their families for helping out today."

"Once again we are thankful to team up with multiple Lions clubs on this very important Weinberg Friends Project. It shows how much Aloha that we give to this school and we want the school community of students and parents to know that the Lions we'll be around to take care it. Working together with these different clubs is something that we've been doing throughout the island and it shows how multiple clubs can band together to make a difference." 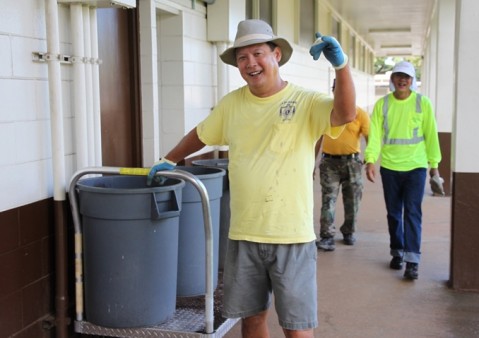 $10,000 Grant from the Weinberg Friends Program that will go towards benefiting the Hawaii Lions

Foundation and their assistance in providing sight and hearing services for Hawaii's needy. 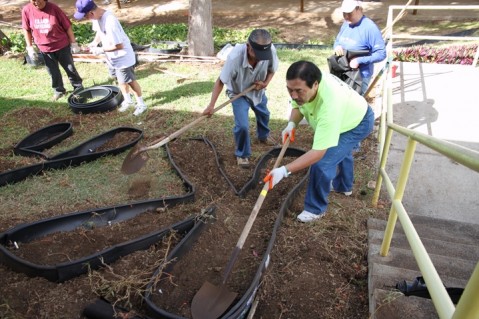 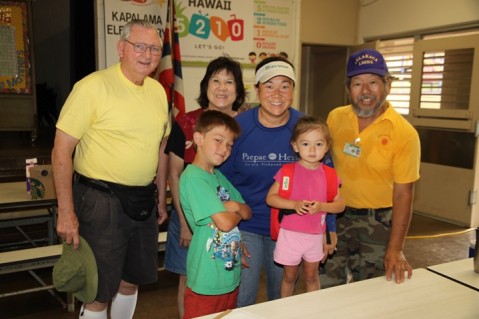 from the Kalakaua Lions Club and his ohana in the Kapalama Elementary School cafeteria on Saturday,

August 24, 2013. After signing in, the group headed out to begin the Lions service project that helped

secure the $10,000 Grant from the Weinberg Friends Program. 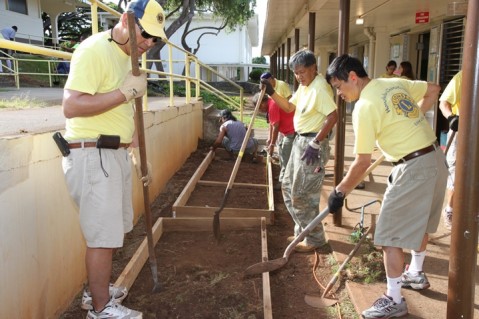 will grow a variety of fresh vegetables. 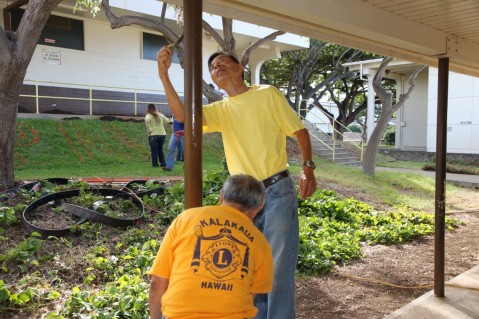 the posts and school cafeteria exterior walls a touch up and fresh coat of paint. 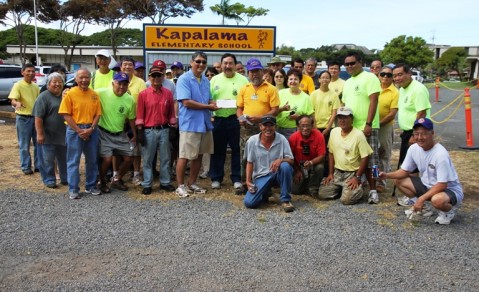 Program and the Harry &  Jeanette Weinberg Foundation, Inc. for their generosity

in supporting our community!