As was the case in the first meeting won by Kaiser 30-6 four weeks ago, the Cougars needed to get down to business to start the second half and preceded to do what they do best, 'pound it out on the ground' and wear down the opposition, upfront, and in the trenches.

The Cougars running game pounded out 256 yards on the ground behind Thomas Leong's 157 yards on 14 carries with 3 touchdowns. Teammate Fitou Fisiiahi picked up 81 yards on 16 carries with 2 touchdowns. Leong also caught 5 passes for 61 yards.

Pearl City QB Jordan Taamu threw for 215 yards completing 11 of 16 with 1 touchdown and 1 interception. Taamu struck gold on an 82 yard touchdown pass to Chargers wide receiver Kierren McGhee with 9:02 on clock in the first quarter that put the Chargers up 13-7.

Dominic Maneafiga also contributed on the scoreboard for the Chargers scoring on a 27 yard touchdown run with 5:21 on the clock in the third quarter. Maneafiga followed his TD run with a successful PAT that tied the game at 21-21.

The Cougars shut down the Chargers offense and went on to score 20 unanswered points to capture their first OIA White Conference championship. Kaiser running back Thomas Leong was instrumental down the stretch in the second half scoring two of his three touchdowns on the night in the third quarter that created separation on the scoreboard as the Cougars increased their lead over the Chargers heading to the fourth and final quarter. Fitou Fisiiahi scored the Cougars final touchdown on a 23 yard rushing touchdown in the fourth quarter. Jeshua Bitanga scored on a fake PAT around the right end of the Chargers defense to put the Cougars up 41-21.

Kaiser head coach Rich Miano was pleased at his team’s OIA championship clinching performance and gave the Chargers high praise for their performance while in battle against Cougars during the championship match-up.

"They performed well, said Coach Miano. “It was a tough one, and Pearl City did a great job. I love the way they coach their kids up. I love the way they scrap, and love the way they play with emotion. Our kids, hopefully sooner or later, feel like their conditioning and their technique will prevail and it did finally, but it took it a great defensive play, and it took some offensive explosiveness because they were taking away normally what we do on special teams for our field position. It was as hard fought as we've had this year. They did the same thing as the last game, .but they just continue to do it well, and they understand our tendencies and we just have to counter some of that stuff. Our hats go off to Robin and his whole staff."

Pearl City Chargers head coach Robin Kami couldn't be prouder of his team and coaching staff following the Chargers hard fought loss to the Cougars. Kami has molded the Chargers into a team that plays hard and aggressive from the first whistle to the last tick on the game clock.

"I think our kids played the best they could," said Coach Kami. "We tried to give them the best chance and we had some good special trick plays to see if we could score early and get the momentum and hang on. The Cougars didn't do anything different from our first game. They are strong, fast, and explosive, but our team battled this time around."

Both teams move on to the first round of the HHSAA DII State Football Championship Tournament that gets underway next weekend. Kaiser comes in as the championship #4 seed and will play Konawaena on Saturday, November 9, 7:00pm at Kaiser High School. on the clock in the first quarter. The Chargers took an early 6-0 lead. The PAT was missed. 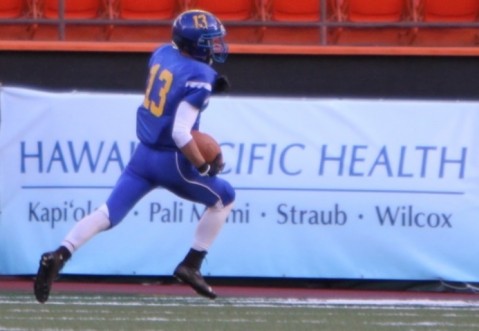 reception from QB Jordan Taamu in the first quarter. After converting the two-point conversion on

a pass from Taamu to Dominic Maneafiga, the Chargers took a 14-7 lead over the Cougars. 5:55 on the clock in the first quarter. The PAT by Matt Sai was blocked by Pearl City's Blake Cooper. Kaiser's Fitou Fisiiahi scores a one yard touchdown run to give the Cougars a 19-14 lead with 6:36 on the

clock in the second quarter. The Cougars went up 21-14 on a two point conversion run by Thomas Leong. hanging on. Maneafiga scored on the play on a 27 yard touchdown run with 5:21 remaining on clock

in the third quarter. Maneafiga also converted the PAT to tie the game at 21-21. Dominic Maneafiga watches his PAT kick out of the hold of Timothy Rivera sail through the uprights. Thomas Leong holds his arms in the air after scoring on a 19 yard touchdown run at 3:15 in the third Pearl City's Blake Cooper is about to break through and block his second PAT of the ball game. Blake Cooper heads back to the Chargers sideline in the third quarter after blocking his second PAT. Thomas Leong scores his third touchdown of the game on an 11 yard run with 2:14 on the Leong is brought down short of the goal line in the Cougars two point conversion attempt. #6 Fitou Fisiiahi is congratulated after scoring the Cougars final touchdown on a 23 yard yard run with 5:20

to go in the fourth quarter. The Cougars scored the two point conversion to increase their lead to 41-21. Bitanga scored the two point conversion as the rain came down on the Aloha Stadium turf. A SPECIAL MAHALO TO THE CHARGERS #1 FAN!