Family, friends, Department of Education and Board of Education officials, as well as school principals and invited guests, filled the PCHS gymnasium in support of the student musicians and singers who performed flawlessly throughout the music festival.

A special mahalo goes out to all the individuals and organizations who helped make the 2014 Pearl City Complex Music Festival a success, starting with PCHS Principal Mr. Aaron Tominaga and PCHS Band Director Mr. Chadwick Kamei for their support of our Pearl City District Complex and the talented performers who represented their schools with pride. 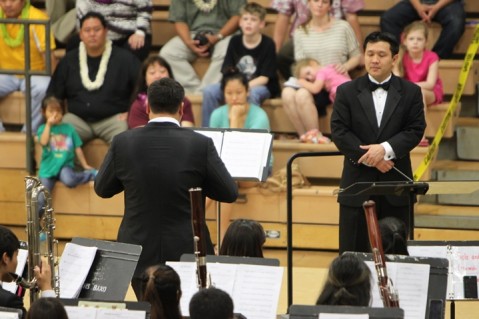 the Oboe in memory of Shae Ideue, PCHS Class of 2012. Shae played the Oboe as a member of the

My apologies go out the schools who were not represented in the cover story photo gallery. If you would like to submit photos of your school performing during the music festival, please e-mail them to: barry@mypearlcity.com. When I receive your photo submission I will update the photo gallery with your photos. Thank you and hope to here from you!