Councilman Harimoto and staff members Robert Sato and Brandon Elefante coordinated the collaboration between several City & County departments and students from Aiea Intermediate School to conduct a clean-up along the Pearl Harbor Historic Trail and Bike Path starting at Neil Blaisdell Park in Aiea/Pearl City. The event also included workshops hosted by the City that served to educate the Aiea Intermediate students on the role that the different city government departments play in serving our communities and residents on Oahu.

Aiea Intermediate School teacher Mason Fitch has developed and incorporated a structured curriculum that teaches his students the value of working together to improve the communities in which they live in.

“I think the whole point was just to showcase at their age, or at any age, it’s really important to be part of your community, because it’s so easy to just to see the community as something else, like this park is somebody else’s responsibility," said Fitch. "So it’s just kind of instilling in their mind that their community is their responsibility and they have the ability to contribute to it. Especially with the stuff that we’re learning in our class, like the standards that they’re learning in my class in Science, English, and Math. All of their learning is required to contribute even more to your community. So we’re really tying their education to a sense of place and showing them that it’s not just this abstract idea but it’s actually like improving your park, or working with the homeless, or reducing pollution. The students were definitely interested in this than they were in anything before just because it is like their backyard, essentially. They’ve been pretty engaged and they all have projects that their working on. They seem like they’re really interested in it."

Mr. Fitch and the efforts of his students to learn and contribute to the Pearl Harbor Historic Trail Restoration Project is a key component for the future growth of a stretch of the Pearl Harbor shoreline that runs through Aiea, Pearl City, and Waipahu. Some of the plans to develop the Pearl Harbor Historic Trail and Bike Path into a world class destination, includes upgrades such as; marked locations that highlight historic sites that give visitors a look back into our past while engaging in the present and future as the Trail transforms and expands with the addition of rest stops, refreshment stations, recreational facilities, bike stations, and tropical landscaping, etc,

Honolulu Mayor Kirk Caldwell played a huge role in supporting the Aiea Intermediate students on Friday. His presence and support, along with the support of the city departments that conducted the various workshops, brought the consciousness and awareness of the needs of our community, and the role they will play in preserving the past while building and securing a positive environment in which to thrive well into the future.

“It’s really important to be here with kids from Aiea Intermediate and working on the Historic Pearl Harbor Trail," said Mayor Caldwell. "This is about preserving our past, and going forward into our future. These kids are our future. They’re the ones who are going to ride this bike trail. Hopefully, someday it will go all the way into the downtown Honolulu and into Waikiki, that’s the dream.  It’s about sustainability. It’s about living healthier, and it’s also about connecting to our aina. Right here where we’re standing, near Ford Island and Pearl Harbor, and the Arizona Memorial, it’s just a great place and it’s also a lot of stories including the plantation community that once existed here."

Councilman Harimoto couldn't be happier with the addition of Mayor Caldwell and the city team working together to lend their expertise for the benefit of the students as they continue to learn about the function of government and their civic responsibilities in their communities.

“When teacher Mason Fitch came to us with this idea we got really excited," said Councilman Harimoto. "With all these different departments of the city coming together to collaborate in order to help the kids learn about government and their civic duties. So we’re here today to share with them some of the things we do at the city and to make that connection to how it impacts their lives and how they can make an impact in the community. We’re going to end with the clean-up of the bike path and the students can understand how important it is to keep the aina clean. The students prepared for this day. They had a research project to do. They did their homework and when they came to the event yesterday, as they did today, they can put their research into actual practice.  They talked to the city folks who are on the ground who are doing the work and then they can make the connection between the research and what’s actually happening. The students will take it one step further after this event to come up with ideas.”

The student’s participation in the Pearl Harbor Historic Trail Restoration Project brings their experience and knowledge gained deeper into the community with the potential to share while perpetuating Mr. Fitch's curriculum into other schools and communities along the Trail and beyond.

“The best part of it is this one event turned out to be actually a potential model to replicate down the entire length of the bike path," Councilman Harimoto said. "So we’re starting with Aiea, and the standards based curriculum that Mason Fitch has created can be then transferred to Pearl City, Highlands Intermediate, can be transferred to Waipahu Intermediate, and we can just go down the path."

“The hope is that this is the first of many of these events all along the trail," Fitch said. "What we’re doing is the curriculum that the students are using that we’ve been trying to put together. We’ll take it to all the other schools like Pearl City and maybe even Ewa. The kids are working on projects that maybe future students can look to and kind of see what they did, but I think it will be mostly Councilmember Harimoto’s office who will lead the cooperation with the other schools."

Today's collaboration compliments the future. A future that looks a little brighter because of the leadership that fuels the city government has reached out to our students and our students have responded with maturity, skills, and an appreciation for those who are willing to give of their time to help and educate them, one on one.

“I don’t think we’ve ever seen this much collaborative effort in such a short period of time in the city," Councilman Harimoto said. "We have all these different departments that really pulled together. They made time to do this because they agreed that investing in the future of our students is very important. I really want to thank the administration. The Mayor’s office has been intimately involved in this, and they had their staff personally involved to help us pull all the different departments together. I don’t think we could have done it without the mayor’s involvement.”

"I have great pride,”  Mayor Caldwell said. "I don’t claim any of the credit for this. I think it comes from the community. It comes from the high school and the intermediate school. It comes from folks like Mason Fitch and Councilman Breene Harimoto. It’s about a community getting involved in their place. If I can help as Mayor, I’m going to do that. That’s why we have our Environmental Services Department here, along with HPD, Parks and Recreation.  We’re putting city resources into this program because I think it’s the right thing to do.”

“It's definitely all the other teachers that my students have. These are a great set of students that are absolutely a reflection of the teaching from them. Also, in terms of getting all of this together, Councilmember Harimoto’s office, especially Brandon Elefante. They were the reason all of this is happening. They were the ones who put it into action." 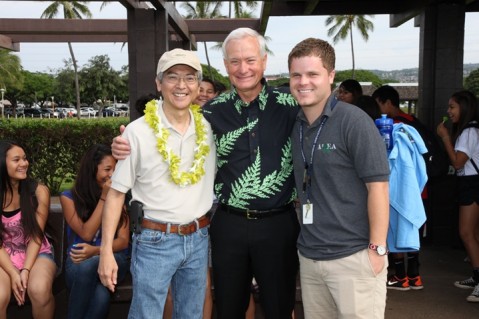 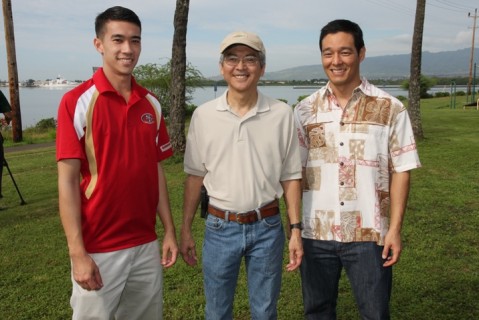 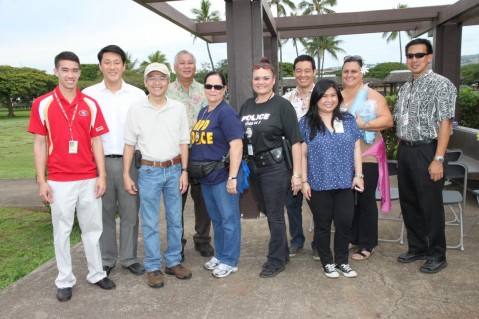 to serve their community through the Pearl Harbor Historic Trail Restoration Project. 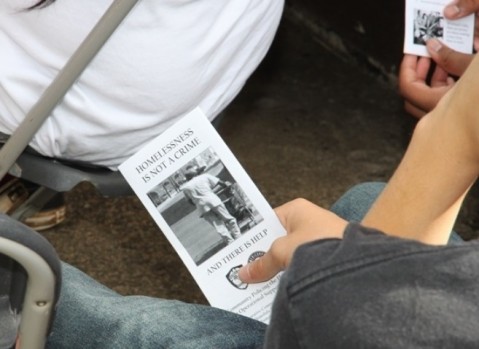 regard to issues such as the growing population of homeless individuals and families on Oahu. 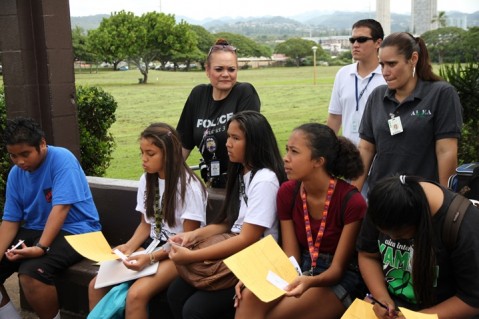 The students were fully engaged and very receptive in learning as much as they could from the city experts. 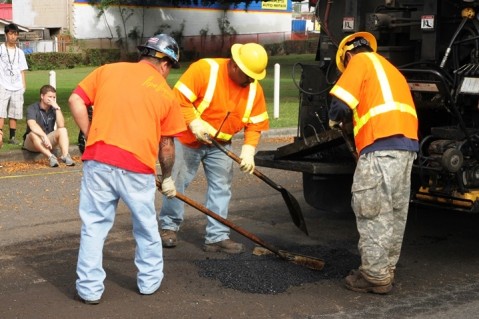 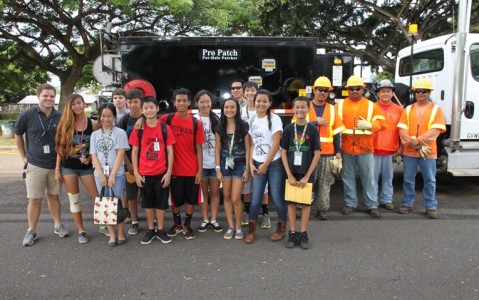 Mr. Mason Fitch and his Aiea Intermediate School students are pictured in front of the Pro Patch

Pot-Hole Patcher with Thomas Takeuchi and city workers from the Department of Facility Maintenance. 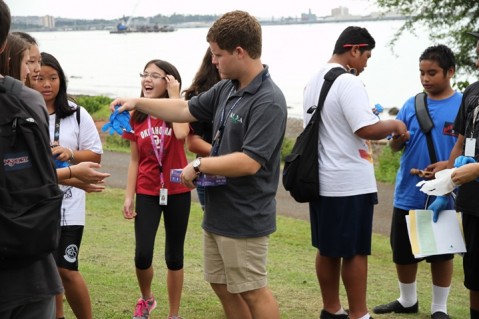 Mr. Fitch passes out gloves as the students prepare to take on the task of cleaning

up the Pearl Harbor Historic Trail and Bike Path along the shoreline in Aiea and Pearl City. 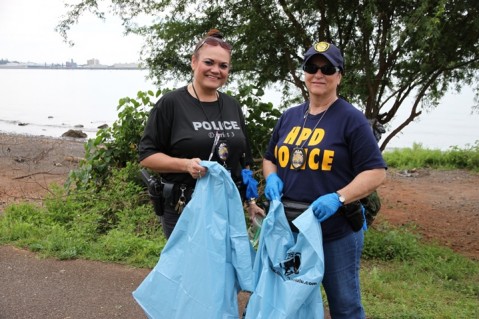 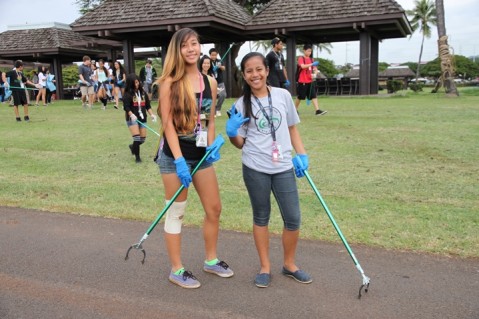 A couple of Aiea Intermediate School students get ready to hit the trail and bike path during the clean-up. 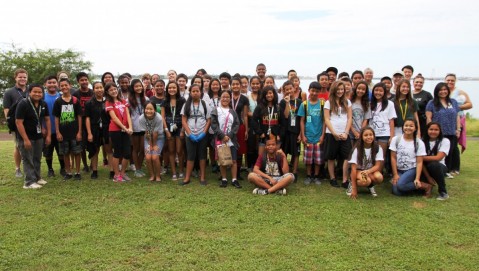 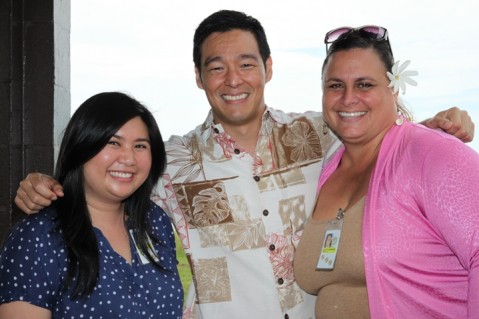 Teamwork will realize the dream and future growth of the Pearl Harbor Historic Trail and Bike Path.