Pearl City High School opened its doors to the newly completed Roy Ichinose Athletic Training Facility on Tuesday, March 11 with a blessing and dedication ceremony hosted by the PCHS Athletics Department. PCHS Administrators, current and former coaches, and student athletes joined invited guests in honoring the retired PCHS teacher, basketball coach, and athletic director in a moment that will most certainly go down as the best kept secret to date at the Pearl City High School campus.

Unaware that the new athletic training facility was being named after him, Mr. Ichinose and his wife Sandra walked through the doors under the impression that he was finally going to see a first class training facility that was only dreamed of in his tenure as AD. What a surprise to be standing in front of a huge sign as he entered the facility with his wife Sandra by his side that read,  ROY ICHINOSE ATHLETIC TRAINING FACILITY held by former Pearl City Lady Chargers Championship Basketball Head Coach Michael Morton and current Lady Chargers Basketball Head Coach Miles Okamura. Mr. Ichinose was instantly surrounded by the attendees who embraced and congratulated the beloved honoree and his wife.

"This was totally a surprise for me", said Ichinose. "It was such a good feeling just to see all the past coaches and new coaches. I haven't been up here for some time, so it's good to reconnect. Wow, this is fantastic! It's been ages since we first tried to get it funded. Nobu Yonamine was the first Representative from Pearl City and he was really good, and he did get appropriations, but it was never released. This is really going to boost the athletic department and even the school. I'm sure maybe the school might want get in here too, make it a full use of this place. It's beautiful, let me tell you. I want to thank all the legislators that worked really hard to get this ball rolling and get the money released. Also, of course Reid, the AD now who is doing a great job and working really hard, and all the coaches. They all had a hand in this."

PCHS Athletic Director Reid Shigemasa expressed the importance of the last night's opening of the new athletic facility and the opportunity to honor Mr. Ichinose who Shigemasa succeeded as PCHS AD upon his retirement from the DOE in 2008.

"Two important things occurred for Pearl City High School tonight," said Shigemasa. " One was obviously the opening and the blessing of the facility that took almost seven years to be completed.  The second is the dedication to Coach Roy Ichinose who’s been a huge symbol to all the athletic programs in Pearl City High School. It was important to make sure that something represented on our campus was focused towards him and his family. I'm just grateful that we got to do everything at one time, and for him and his wife being here."

As a former Charger student athlete, it was an awesome experience being there to witness and capture the opening of the Roy Ichinose Athletic Training Facility and the important role it will play for generations of student athletes who will benefit from the best athletic training facility and skilled core of PCHS athletic trainers that include; Kim Imamoto, Bria Bledsoe, and Colin Lee.

In the early and middle 70's, I had the opportunity to watch Mr. Ichinose lead his varsity basketball teams to the top of the OIA polls. Players like Neville Brandt, Conrad Shidaki, Scotty Kaneko, Steve Yoshihara, and Eric Schmidt starting the winning Charger tradition under Coach Ichinose. They blew the roof off of gyms while competing against schools like Waipahu and Radford on the road. I can only imagine if we had our own gym back then.

As I look back, last night connected Mr. Ichinose with his early beginning and the adversity as a PCHS coach in the early 70's, with no athletic trainers and no athletic training facilities. The most valuable commodity to the athletes back then was an endless supply of athletic tape, salt tablets, and guava's that were harvested by our football team manager who would take two football helmets into the woods to collect a fresh stash of free Vitamin C. We've come along way.

The legacy that Mr. Ichinose has built reached a pinnacle moment last night. A moment built on his success and the success of every student athlete that he taught as a teacher, coached, and guided as an athletic director at PCHS. He has inspired them through the years to be winners. His legacy will continue to perpetuate his Charger Spirit as the Charger student athletes of the future utilize and excel from the use of the ROY ICHINOSE ATHLETIC TRAINING FACILITY. 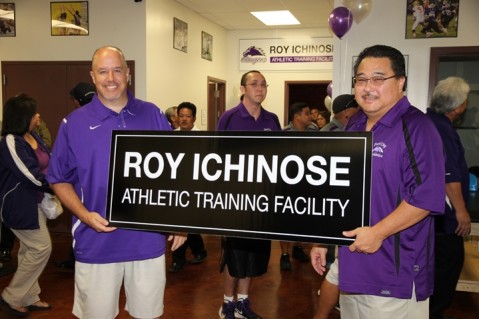 Athletic Training Facility signs that will grace the entrance to the new facility at Pearl City High School. 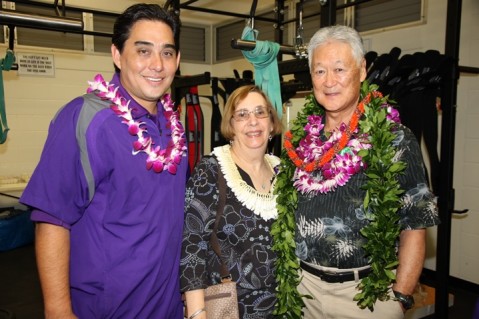 front of the brand new work out equipment located inside the Roy Ichinose Athletic Training Facility.

STATE OF THE ART 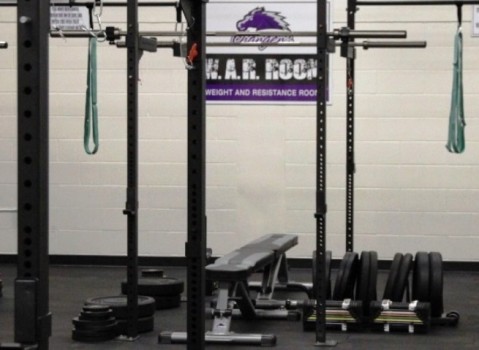 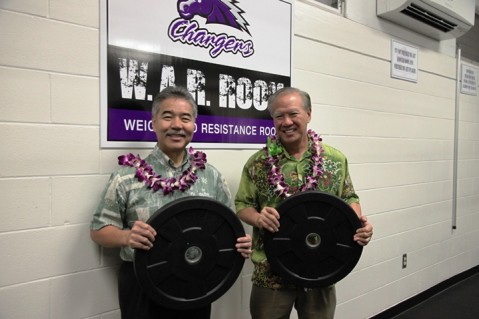 officials to work out in the new W.A.R. ROOM at the Roy Ichinose Athletic Training Facility. 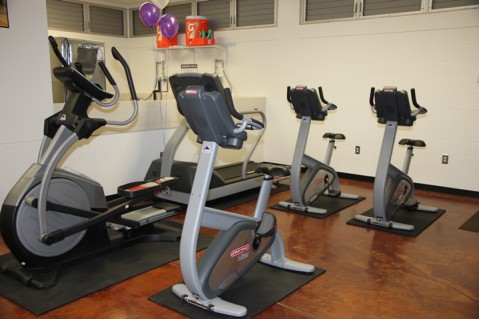 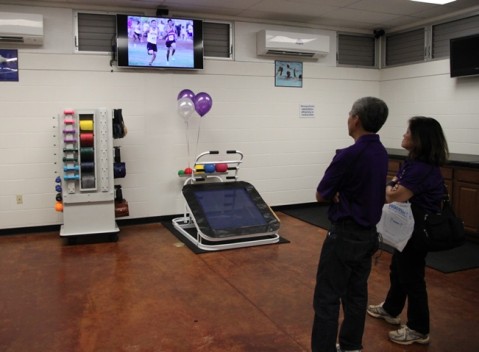 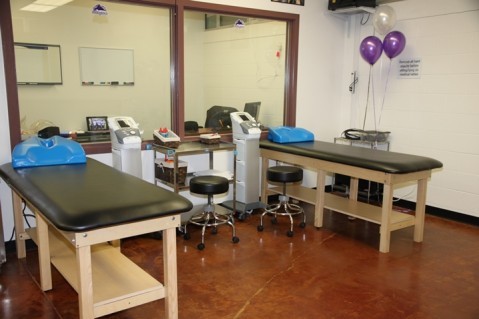 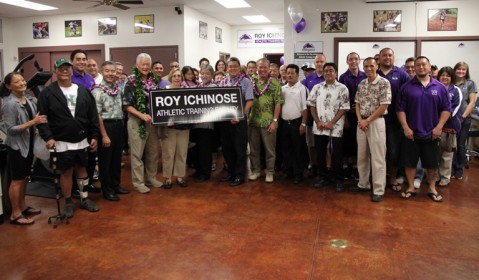