Students and faculty representing ten Pearl City District Complex Schools participated in the "It's Not All Right To Run The Red Light" Traffic Awareness sign waving event on Monday in a collaborative effort to bring attention to the danger of running red lights and stop signs in our Pearl City community.

The sign waving event was presented by MyPearlCity.com and the Pearl City Shopping Center Merchants Association. Each school sign waved in front of their schools from 7:15am to 8:00am. A steady drizzle came down on the sign wavers, but didn't have an effect on their spirits or desire to spread their traffic safety message.

Representatives from Kiewit made a very positive impact while sign waving at Pearl City Highlands Elementary School. Around thirty very spirited and enthusiastic Kiewit employees lined Waimano Home Road waving their signs while motorist beeped their horns in appreciation for their traffic safety message and efforts.

The students in eight Pearl City District Complex Elementary Schools are also participating in a Poster Drawing Contest that starting on March 24 and will run through April 21. Winners in three categories; K-1, 2-4, and 5-6 will be awarded certificates for the top three finishers in each category from each school.

The overall objective of the "It's Not All Right To Run The Red Light" Traffic Awareness sign waving and poster drawing contest is to deliver the message of traffic safety via our Pearl City District Complex Schools. The goal is to teach our youth the importance of traffic safety while engaging them in traffic safety programs and campaigns throughout the school year.

In return, our hope is that they will grow up to be safe drivers on our roadways and in our neighborhoods, because of their participation and the knowledge gained through the “IT’S NOT ALL RIGHT TO RUN THE RED LIGHT” traffic safety awareness campaign. As a result, their experience and knowledge will be perpetuated and passed on to the next generation.

"I'm really glad to be here in the Pearl City area. It's for a very important cause this morning. We're waving to ask people to please slow down as you drive your kids to school and get to work. We have a lot of congestion here in Honolulu and people are always rushing. Going a little bit slower could save a life. Just up the street from where we are someone was killed a couple of years ago. Think about the impact on that person’s family, and even the person who hit the person, the impact on their life. It’s just going a little slower, may get to work five minutes later, but it means you may have saved a life. So, please, drive slower, be careful and when you come to a light, when it turns red, when it turns yellow that means stop. Not to speed up to get through the light. When its red don't go through it, and drive the speed limit. Near our schools its 25 miles an hour not 40."

"This is really important to just highlight the need for safety. We have many men and women working out here every day, every night, getting the rail work done out in the streets. It’s just a little reminder to people to be mindful of the people on the street. Drive safely."

"Well you know traffic has been getting worse and worse and people have been getting slightly more reckless, so I think this is really a statement about remembering that we need to be safe. There are lots of children and elderly walking around the community."

"You know we pass laws to require both drivers and pedestrians to be aware when it comes to traffic safety, but around elementary schools it’s really incumbent on the drivers to be on the alert for school kids because they're not always aware, and they're not always responsible. So it’s up to drivers to take responsibility."

"We want to support the community by sign waving this morning and saying to drivers to be careful about the people, specially the students crossing the street, and to observe the traffic lights and stop signs."

"Well our company of course, we do roadway safety so it’s kind of natural for us to be involved with another campaign that promotes safety in the State of Hawaii."

"You know safety is a top priority for our rail project and part of it is being part of the community and participating in these types of events. I think drivers in general, it doesn't matter whether they're in vacation mode or during school time, they just need to be aware of students crossing and just follow the traffic laws."

I would like to thank the following Pearl City District Complex Principals who came together to make the "It's Not All Right To Run The Red Light" Traffic Awareness sign waving event a huge success. Their schools played the biggest role in getting the word out to drivers in our community to drive safely:

Mahalo to our generous sponsors and supporters:

A very special mahalo to Elizabeth Tang, Kiewit Public Involvement Coordinator, for playing an integral role in securing sponsors and for her exceptional skills with regard to the coordination and execution of the "It's Not All Right To Run The Red Light" Traffic Awareness Campaign.

Mahalo to Sheri Rolf from Rolf Advertising for her talents and expertise in coordinating our Public Relations and Advertising campaign. Also, to KITV 4 reporter Ashley Moser for a great job interviewing and presenting the people that truly make a difference in the success of our "It's Not All Right To Run The Red Light" Traffic Awareness Campaign to the stations viewers and worldwide web audience.

Finally, mahalo to all of the talented and awesome students that proudly represented the ten schools in the Pearl City District Complex!

the sign waving in front of her school. HIS students pictured in the background.

Mr. White says, "It's Not All Right To Run The Red Light"

Momilani Elementary School students and faculty pictured  in front of their school, in the rain, to support the

"It's Not All Right To Run The Red Light" Traffic Awareness sign waving event on Monday, March 31, 2014. 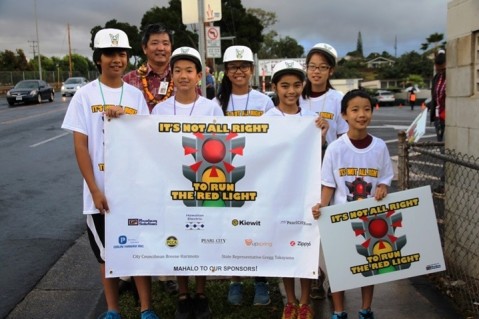 with his JPO students near the entrance to the school parking lot on Waimano Home Road. 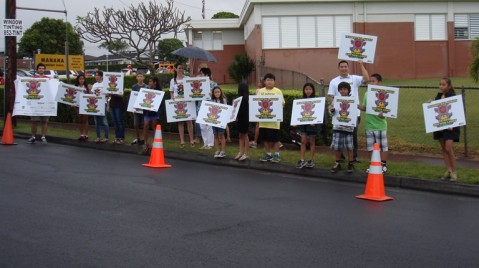 Manana Elementary School students sign waving on Monday in front of their school. 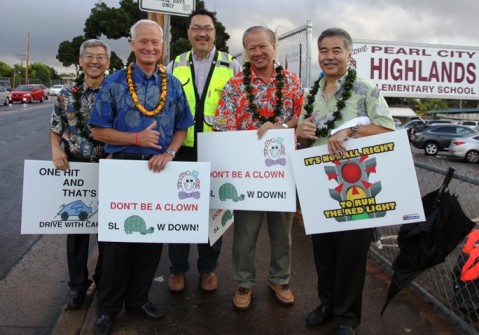 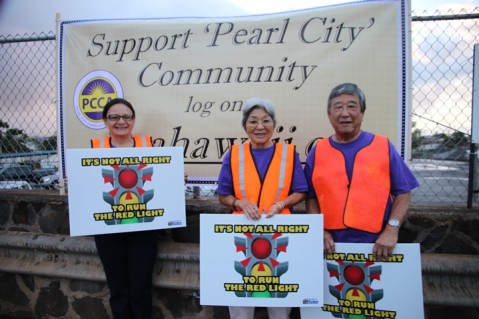 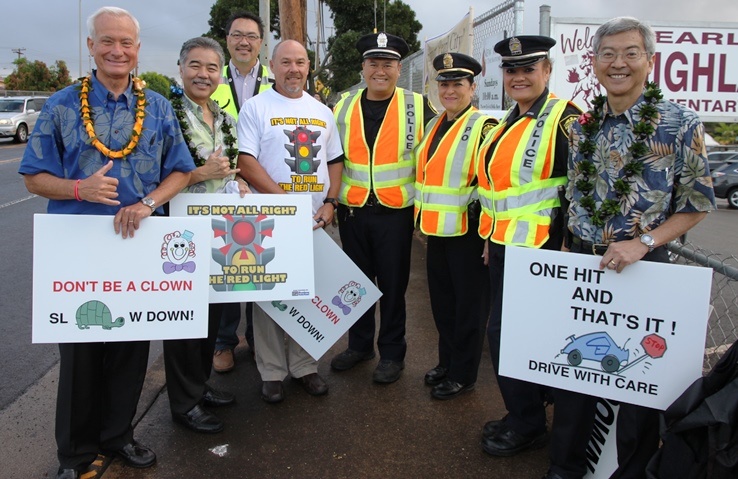 School Principal Michael Nakasato were the first to be interviewed "live" at 5:00am by KITV 4 morning 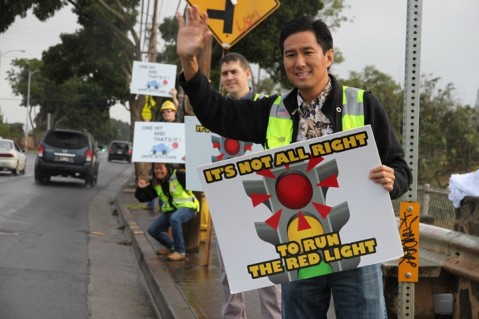 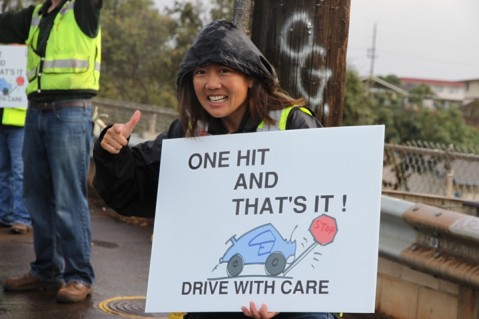 Just having some fun! 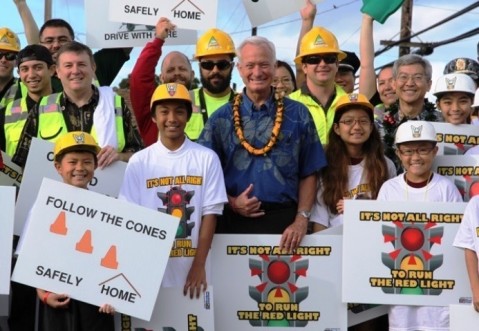