LEAR Director & Producer Mr. Steven H.Y. Kam has masterfully trained and prepared a cast of talented Pearl City High School drama students whose acting skills will definitely impress the audiences starting with a performance for the PCHS student body on Thursday, April 24,  and also for the general public from Friday, April 25 – Sunday, April 26.

Mr. Kam is currently an AP English Literature and British English Language Arts teacher as well as the PCHS Drama director/instructor. He is joined by the talents of LEAR Assistant Director, Mr. Jerrick Julio who is also a 2003 PCHS alumnus and former PCHS dramatic arts performer. Jerrick has been helping out with Pearl City's productions since 2005.

I was able to sit down recently during rehearsal with Mr. Kam and four of his lead characters which included Blaze Lovell who plays King Lear. The group commented on the excitement of having the opportunity of being cast in their lead roles as well as sending out thanks to those who have made a difference in their experiences as actors in PCHS Dramatic Arts program. Mr. Kam started it off with his comments on the complexity and difficulty in presenting a Shakespearean play such as LEAR at the high school level. Hard work and dedication by the students will shine bright this weekend.

"We're doing Shakespeare’s King Lear which is a very difficult play. It's probably at the same level as Hamlet. Probably that much more difficult, especially since it deals with an older man, and most high schools, actually no high school does it because they don't have the life experience to really understand what to do. This is a small cast and they've really worked hard to try and put some understanding in it and still make it accessible to a high school and younger audience. It is a difficult challenge, again, because no high school usually does it. But, it is right up there, and it's very much good or great theatre. So the cast has been working hard since October. While there are no musical numbers, like we've been doing for the past five years, it is still something that I've returned back to since the beginning where I started off with a Shakespeare play because that is something that is passion of mine. The kids are starting to understand it, and hopefully the upcoming audiences will understand it too. I think the hard core Shakespeareans will probably be pretty impressed that a young group as this can even make some understanding and some headway with a show of this caliber."

“In the beginning Mr. Kam told us how difficult it was to play King Lear. It’s a difficult role, and generally the actors that want to play it are too young to have a life experience, and by the time you have the life experience to actually play the role, you’re dead. To get into character, I went on YouTube and watched some of the other performances by James Earl Jones and Ian McKellen. I know it seems strange, but day to day, I just observed how old men acted and walked. I read some articles about insanity to get into the mindset."

I would like to thank Mr. Kam, he's a great director. Also, Jerrick Julio, he's great too. Mr. Dunford was a great vocal coach. He taught us all how to really project and also helped with our acting enunciation and to really understand the scripts. And of course, I would like to thank the cast, because they really helped in bringing it all together."

“It’s a hard part to play because she’s a very mean person and I don’t like to be mean to people. I don’t like to hurt people. I’m pretty excited to play the character in front of family and friends."

"Of course I would like to thank Mr. Kam, Jerrick, and Mr. Dunford because I never acted before in my life, so they really helped me a lot. Also, thank you to my cast members because they really brought me out of my shell, I was really shy at the beginning. Thank you to my parents, they really supported me."

“Since I play the youngest daughter, I’m actually somewhat similar to her. I’m not an only child, but, for her I actually have to give a lot of emotion into the part. She is the most loyal daughter. Acting kind of releases my feelings, and whenever I’m stressed this actually helps me to be happy and have fun.

"I would like to thank Mr. Kam, Mr. Dunford, and Jerrick, and course I would like to thank the cast because we couldn't have done it without all of them. I love all of you guys. I really want to thank my parents because I'm not going to lie, I'm not the best student there is, but they support me no matter what. So I'm very grateful to them. My dad is very hard on me because he knows this is what I want to be, I want to be an actress, so I want to thank my dad a lot. I want to also thank my friends, especially Chloe, because she's always there with my ups and downs."

(Lear cast members pictured from left to right at rehearsal on Thursday, April 17, 2014 at 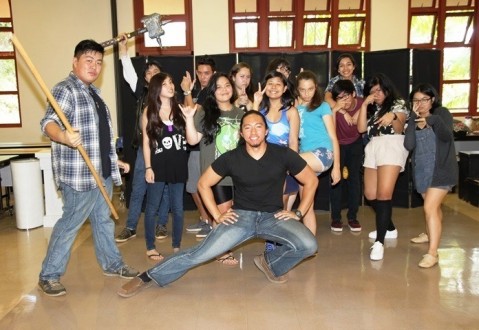 Please click on the LEAR banner ad on our homepage for show dates, times and ticket prices.