Community volunteers from Pearl City and Aiea joined together at the Pearl City Post Office on Saturday to collect food donations from the generous Pearl City community during the 26th Annual National Association of Letter Carriers Food Drive. All food donations collected will go directly to the Hawaii Foodbank to feed Hawaii's hungry and needy population.

Mail carriers passed out food donation bags along their routes in Pearl City during the week and collected the donations on Saturday which were brought to the Pearl City Post Office parking lot to awaiting volunteers who sorted and boxed the food donations for delivery to the Hawaii Foodbank. The annual food drive in Pearl City is ranked amongst the top food donation collection sites on Hawaii.  Last year, Pearl City residents contributed over 40,000 pounds of food donations in one day.

"We always tell people it's a one day drive and it's the easiest drive," said Adele Yoshikawa, food drive coordinator and Pearl City letter carrier.  "The community received blue bags and cards in their mail boxes during the week. They filled them out and left them at their mail box, and upon the carriers regular mail delivery they picked them up. All the food is donated to the Hawaii Foodbank. Every year we try to surpass the previous years goal. Last year, just here in the State of Hawaii, we collected over 500,000 pounds. Nationwide, because this is a nationwide drive, we collected 74.4 million. Over the 21 years that we've been doing it, over 1.3 billion pounds has been collected. Last year in Pearl City we collected over 40,000 pounds in one day."

The food drive partnership between the community and our Pearl City Post Office is growing each year while uniting our Pearl City residents and residents from neighboring communities for the benefit of providing food and nourishment to Hawaii's hungry. It also gives our students an opportunity to fulfill their community service responsibilities while volunteering with the food drive, that for many, becomes a life changing experience.

"That's why you see all these volunteers here," Yoshikawa said. "I think this event has just brought the community together. The community is helping us by volunteering and at the same time we're helping them because a lot of kids here have to do community service for their schools. Today we have students from Aiea High School, Damien and Aliamanu Intermediate."

Students from the Aiea High School Interact Club volunteer throughout the school year with projects such as the food drive in support of the Aiea and Pearl City communities.  Youth Services Co-Chair for the Rotary Club of Pearlridge, Greg Arakaki works closely with the students and is thrilled for the opportunity to involve rotary club volunteers, side by side, with the Aiea Interact students for such a worthy project that is supported by the Aiea-Pearl City community.

"Ebony Fiatoa was the key to getting the Aiea High School  Interact Club involved," said Arakaki. "Her aunt, Kristine Fiatoa, is the President of the Aiea-Pearl City, National Association of Letter Carriers Branch 4682.  When Kristine asked Ebony to see if the Interact Club would help, it was an easy decision.  And the Interactors extended the Rotary Club of Pearlridge an invite to participate as well. To see firsthand how much the Aiea-Pearl City community was willing to donate gives you goose bumps and fills you with civic pride.  I’m proud to be a resident," added Arakaki.

The letter carriers and their families also unite with one another as volunteers in the annual food drive.  It serves as a special bonding opportunity while contributing to the community together.

"It's really neat because every year my family always comes out, so the carriers family gets involved and keeps the unity in our office too," Yoshikawa said. "We always want the public to know that the carriers do more than just deliver mail. We're out there helping the community with events like the food drive. We see the community every single day and we want them to trust us. I always want to say thank you for the participation because without the community there's no way we could hit totals like this."

I would like to personally thank the community for your donations and all the volunteers, especially the students who worked hard throughout the food drive while collecting, sorting, and boxing thousands of pounds of food donations for the Hawaii Foodbank. The total amount of pounds collected was not available while putting together this cover story, but hopefully it will surpass last years haul of 40, 000 pounds. It would not be possible without your help and dedication. Congratulations and mahalo for your efforts! 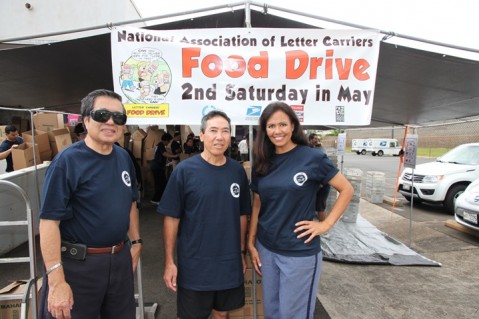 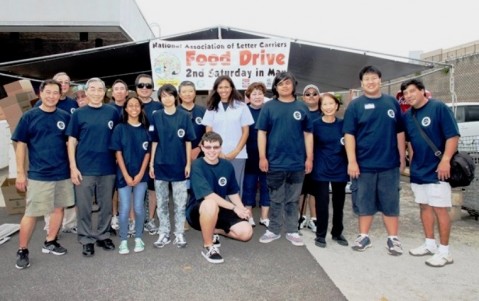 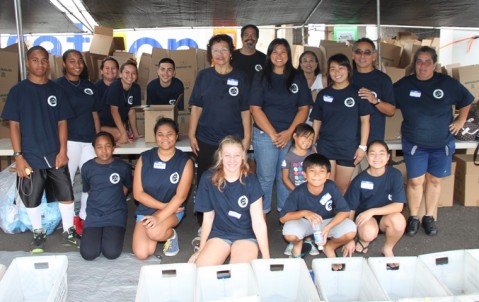 Mahalo to the awesome students and their supporters for volunteering their time on Saturday! 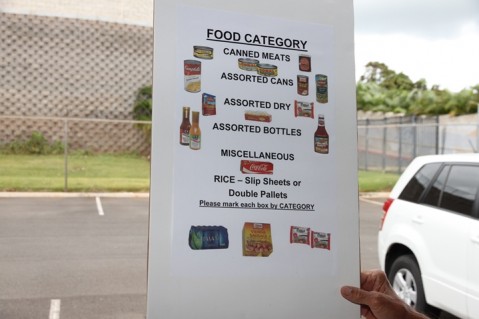 Food donation categories collected from the community on Saturday. 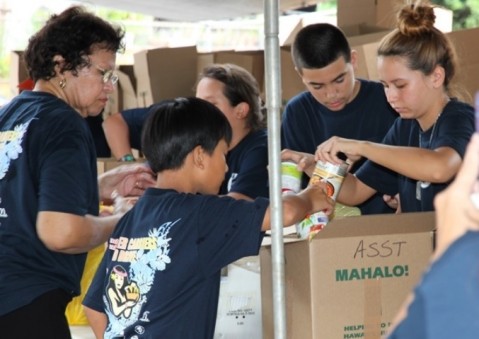 Mahalo to the community for your support of the Hawaii Foodbank and their mission to feed the hungry.