Democrat Mark Takai is putting everything on the line after giving up his State House of Representative seat, which he has held for the last twenty years, for the opportunity to win elected office in the U.S. House of Representatives for Congressional District I.  Takai has momentum on his side after pulling even and moving ahead of top challenger Donna Mercado Kim. Takai has gained major endorsements in the past few the weeks in support of his bid for Congress. Pretty impressive support and a true confidence builder for him and his campaign team and loyal supporters who continue to work through the eve of Saturday's Hawaii Primary Election.

Experience is at the forefront and has been dissected by the media who are interested in focusing and honing in on the issues that when addressed and answered, separate the candidates from the ones who can best answer the questions at hand while providing a sense of maturity, sincerity and overall believability that if elected to serve in Congress, that’s exactly what they will do, serve the people of Hawaii, not their own political agendas.

In a live televised debate that was broadcast on KITV 4 on Tuesday, July 22, the candidates for Congressional District I were asked who they would vote for out of the candidates excluding themselves. A little uncomfortable, you bet, but it didn’t seem to bother them as each candidate gave their pitch and reason why they chose a certain candidate. Final tally, three for Mark Takai, three for Joey Manahan, and one for Kathryn Xian. A bit of a surprise was a no vote for Senator Donna Mercado Kim.  Ironically, Senator Kim threw her vote for Mark Takai. Kim was leading Takai at the poles at the time of the debate. Takai is currently riding a wave of momentum and support and is looking strong in recent poles.

As a Middle East war veteran and Lt. Colonel in the Hawaii Army National Guard, Takai understands, first hand, the fight to protect war veterans and their benefits through the VA and legislation that will l ensure provide proper medical care and personal services as they are integrated back into civilian life.

He has been a champion for our veterans and has brought closure and honor to those  who have lost their loved ones while serving their country in war with the Gold Star license plate program that recognizes their ultimate sacrifice for our country while protecting the safety and welfare of American citizens throughout the world.

Takai has the support from friendships made with current members of Congress as well as from former elected officials like former Hawaii Governor George Ariyoshi, “During his 20 years in the State Legislature, Mark Takai has been a strong advocate for Hawaii and our people. Mark has worked hard to improve education and the University of Hawaii. He is our champion for sustainability.”

Reaching across political party lines to get the job the done for the benefit of the people of Hawaii and his district is something that Takai has prided himself in accomplishing throughout his 20 years in elected office as a Hawaii State House Representative. If elected, he plans to continue that reach in Congress.

"I have a track record of building partnerships and working with people across the aisle and people that we may have differences of opinion in certain issues, but we have a genuine desire to make Hawaii better. I think Washington has lost that. There are to many people on both sides of the aisle just really dug in. I'm looking forward to the class of 2014 being able to bring some of that back. I look at what Senator Inouye (D) and Senator Stevenson (R) used to do from political opposites in terms of parties, but be able to be best of friends. In fact, Senator Inouye would go and campaign for Senator Stevens. You don't see too much of that anymore."

Well, I can confidently say that Hawaii voters along with voters across our nation dream and wish for representation in Congress that can mirrors Senator Inouye and Senator Stevenson's example of friendship and reach across the. aisle.

I would like to wish Mark Takai all the best and much success in his bid for Congress and thank him, his family, and his supporters for their dedication to our Pearl City community and its people through the years! 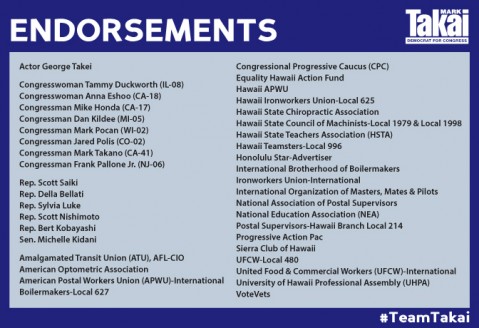