Jaci Agustin, walking her way to the 34th House

What seemed at first to be an uphill battle for Republican candidate Jaci Agustin, has now become a momentum gaining quest to put in the mileage, on foot,  in neighborhood after neighborhood,  towards her goal and ambition to win elected office in the State House of Representatives, 34th District that includes Pearl City, Pacific Palisades, and Waimalu.

Agustin has been pounding the pavement, on a daily basis, while introducing herself and her campaign messages of Service, Integrity, and Sincerity to those who have answered theirs doors and have spent a few minutes getting to know her. In return, Agustin has gained valuable insight, vision, and listened to concerns from resident voters in the district with regard to the direction we are heading as a community and state.

District 34 is dominated by a registered Democrat voting base, but Agustin is hoping to change that by earning the trust of Democrat voters that truly believe that she will honestly reach across the aisle to work with Democrats on issues that truly benefit all residents and their ohana. In order to shift the vote in her favor, Augustin has strategically coordinated a game plan into her campaign through sign waving, walking the district neighborhoods, speaking opportunities, and volunteer work that will position her successfully unseat incumbent Gregg Takayama. Representative Takayama is seeking a second term in District 34.

Agustin knows how to work with, and for the people with hundreds of hours of experience serving the community in which she lives as well as communities across the Hawaiian Island chain and United States as the 2013 Mrs. Hawaii. She also has on her resume, seven years of experience while working for the YMCA in the organizations program development and outreach to the community services.  Her responsibilities at the YMCA brought her close to our island youth teaching nutrition education to over 4000 keiki.

Most importantly, Jaci Agustin understands the issues that affect everyday life in Hawaii and has a plan that will secure a better future for island families as they grow and age. Agustin is mother to her three year old son C.J. and is married to Chad Agustin who an Officer with the Honolulu Police Department and an Army Reservists. Chad Agustin is also a former baseball star from University of Hawaii Hilo where the couple first met in college. They recently celebrated their 10th Wedding Anniversary on October 1, 2014.

Jaci Augustin has committed her campaign to being deeply involved in working to bring the cost of living down, take care of our kupuna, build support for our education system, find a fix for community traffic woes, enforce stricter laws for domestic abuse, and find the answers to our homeless problem. The homelessness crisis is an issue that she fully understands after finding her family in that situation while growing up in Hilo. Homeless, hungry and living on the beach, Jaci Agustin has come a long way and hopes to use her experience to change the lives of those in need. Upfront and exposed is a big heart that shines in her poise and with every handshake and hug as she meets new friends and says hello to old friends, and supporters along the 34th House campaign trail.

Q: What motivated you to run for elected office?

A: Well, first and foremost, I’m a mom so I do have interest in the future of this area because my son grew up here and I want to make sure that it’s a place where I want him to grow up.  Secondly, I told you that I worked for the YMCA which I was heavily involved in the community. I’ve gotten to know the needs. I’ve gotten to see what people hope, and what they are asking for.

Q: How about your valuable community service experience that you gained while employed at the YMCA?

A: I worked for the YMCA of Honolulu for seven years where I did program development and outreach to the community. I actually brought nutrition education to over 4000 of the children here in Hawaii on a weekly basis. I served the community a lot in that capacity.

Q: Community service opportunities given to you after being crowned the 2013 Mrs. Hawaii?

A: Even my rein as Mrs. Hawaii and getting out and doing over 100 volunteering experiences throughout the community, it really opened my eyes and my heart to service for the community. I really just found my calling in life to continue to serve and I thought what better way to serve than to serve as a legislator. So that’s I want to do it.

Q: Positive results while working in the area of nutrition for our keiki at the YMCA?

A: Some good steps that have been happening are for an example is that we’ve gone to hapa rice at one time. You know half and half, but we need to continue to make sure that things on our children’s plates are the correct serving of fruits and vegetables, but we need to make the kids want to eat it. That’s the problem right now, kids are not interested. It’s a lot about education with the children, but also making food fun. The program I worked on at the YMCA is called “Food and Fun”,  therefore the children are not just like, “ooh, it’s healthy”. You have to make sure that they want to eat it. Secondly, it’s not just about what you eat, it’s an energy balance, so we need to make sure that physical education is just as important in our school system.

Q: Your thoughts on overcoming budget cuts to our schools from the Hawaii Department of Education that affect important programs that are beneficial in learning process for our students?

A: I do have a degree in elementary education and one of the things that we were taught is even if your budget is being cut in those regards, when you’re teaching a kid, you can incorporate all those different aspects in. For example, if you’re trying to give a math lesson, you can teach them using physical activity, you can teach doing art. It would probably come down to getting back to having more hands on real life experiences for the children in their education.  We’re incorporating everything in their lesson plan. If you’re cutting the arts, but you’re teaching your math using art, than at least you get the best out of it.

Q: The problem of homelessness on Oahu?

A: One of the things that is near and dear to my heart is the homeless issue here in Hawaii. I know that it’s not just in Waikiki. We have them here in this district. Having once been homeless as a child growing up in Hilo. My mom was a single parent, going to school and just couldn’t make ends meet. We found ourselves living on the beach in Hilo. As I see the homeless community here in our district, I feel that we need to take care of them. There’s a comprehensive plan that we need to develop where all stakeholders are involved.  I think a lot of people that live in our district think that problem is not here, but it is. I actually go to Blaisdell Park twice a month and serve the homeless population at the park. Homelessness is something that I am very passionate about.

Q: Your opinion with regard to the negative culture of some elected officials in office today?

A: I’m finding that a lot of people nowadays are finding that some elected officials are more into self- serving, rather than serving the people around them. My heart is to serve others.

Q: How have you been received as a Republican candidate in a Democrat dominated 34th district?

A: I have not had a negative experience. Going out and walking the district, knocking on almost every door, I have not had anybody tell me something really negative. I’ve had all very positive experiences. Even when I have someone tell me that they’re a Democrat, I tell them that they can still vote for me. Once I get to talking to them, and tell them what I’m representing and what I’m about, a lot of times they’ll turn and say you got my vote.  Here in Hawaii people are starting to realize that the position of power has been the Democrats for a long time.  And a lot of people are thinking in their minds, well  the cost of living is so high, we have all these problems, maybe we need to  try something else. That’s the reception I’m getting when I go to the doors. It’s, “wow, she’s fresh, she’s new, she has the energy to get out here and walk every day and do all these things. Maybe that’s what we’re needing?  The Republican Party, not only at the legislative district, but even in our Gubernatorial and Lt. Governor race, people are starting to see that in a new light. I think that it’s going to be a win for change coming up.

Q: Reaching across the aisle if elected?

A: Once you’re elected, you’re not just representing Republicans, or you’re not just representing Democrats, you’re representing all the constituents and all that encompasses. Therefore, you have to work together with the Democrats across the aisle, or the Republicans, vice versa. It’s not just about one side being in power.  It’s about all parties coming together, having a compromise, and that’s what’s best for the people of Hawaii.  It’s not one sided. That’s what I believe.

Q: Strategy leading up to the General Election on November 4th?

A: I’m going to continue walking the district every single day. It’s important to me as person to get out and meet all of the people. The voters will see that I’m working hard now, and hopefully they will think that she’s going to work hard for me in the future.  So I will continue to be out walking. I will be out almost every day sign waving. It’s a grass roots effort. When I’m knocking on doors, it’s actually me.  I’m not sending out a team. I’m knocking on all those doors.

A: I have a very supportive campaign team. First of all Jack James, my campaign manager, and all my campaign volunteers.  And of course my family.

Q: How has walking the district prepared you for the “Big Walk” if elected?

To learn more about Jaci Agustin's story and her campaign efforts, log on to: http://www.jaciagustin.com 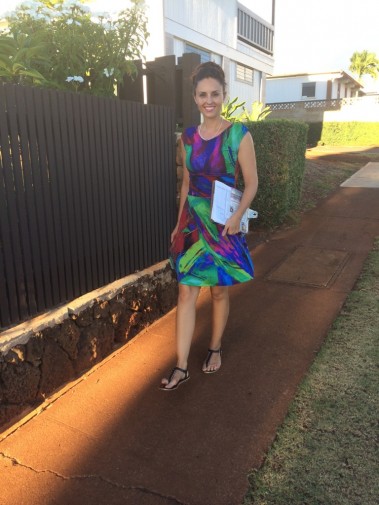 Candidate for the 34th District, State House of Representatives