A majority of Highlands students took part in the Fight the Air challenge on October 29, 2016 in B Building, and D Building. Just last month, these challenges surfaced across the web leaving everyone with mixed emotions. Some of these include the Mannequin Challenge, “Andy’s Coming!”, Fight the Air, even Fight the Trashcan, and much more.

What are these challenges, and what’s their purpose? “Andy’s coming!” is a reference to the movie series, Toy Story. In the movie, every so often a toy character would yell the phrase “Andy’s coming!” whenever they sense that their owner, Andy is approaching. They would then drop dead to the floor and act as if they were always like that. Air fighting is basically punching and kicking the air, while yelling barbaric phrases. And the mannequin challenge is just staying frozen while the song Black Beatles by Rae Sremmurd plays.

How did this phenomenon get around? Just ask some of the students from Edward H. White High School in Jacksonville, Florida. They started off this fad with the very first Mannequin Challenge video. This trend made its way right here to Highlands. Lately, a lot of our students have been doing these challenges with their friends. Some even did it in their classrooms!

“I think it’s fun, and can give good laughs,” expressed Daryan Talia. The 8th grader on team Ho’oko said that he and his friends already did the Mannequin Challenge once and are already planning on doing the challenge again a second time.

“I don’t really see what the point is…” admitted 8th grader, Isabella Romualdo. “Everyone that’s doing this, is just risking getting into trouble.” She mentioned that she sometimes has to reluctantly film her friends when they “fight the air” or drop to the floor while someone yells “Andy’s coming!”.

Will all of these challenges still be a thing in the future? Only time will tell. 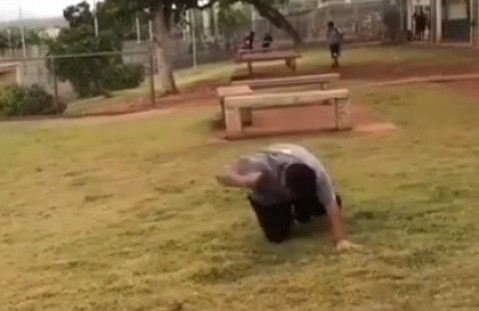 "Samantha" as a part of the fight the air challenge."!