Congratulations to the Highlands Intermediate School Science Olympiad team for repeating its success three years in a row by winning first place at the Hawaii State Science Olympiad Tournament on Saturday, March 4, 2017! This state championship was probably the toughest competition in the 13 years of the state tournament history. A total of 68 teams from both public and private schools competed in 6 regionals that culminated in a statewide competition for both middle and high school students.

The team placed first in Anatomy and Physiology, Dynamic Planet, Ecology, Experimental Design, Invasive Species, Meteorology, Microbe Mission, Reach for the Stars, Road Scholar, Rocks and Minerals, Wind Power, and Write It Do It. Congratulations to the entire team for such an outstanding performance! Good luck to the team as they travel to Wright State University in Dayton, Ohio for the 2017 National Science Olympiad to be held on May 19-20, 2017. 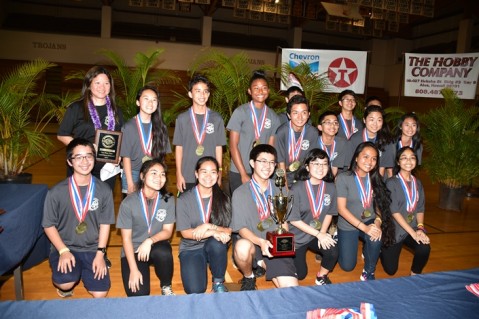