Congratulations to the Iolani Lady Raiders who repeated as state champions after getting past the Pearl City Lady Chargers 1-0 in the 2018 HHSAA State Girls Soccer Championship game played at the Waipio Peninsula Soccer Complex on Saturday, February 10, 2018.

Mia Watanabe kicked through the winning goal at 39:26 of the first half.

Iolani and Pearl City placed 8 players on the All-Tournament team with Lady Raider Mia Watanabe being voted as the Most Outstanding Player.

Pearl City's Naomi Takata was voted as the All-Tournament Team Goalkeeper for her outstanding performance protecting the Lady Charger goal throughout the state championship tournament.

ALSO, CONGRATULATIONS TO OUR LADY CHARGERS!

Iolani's Mia Watanabe scored the winning goal at 39:26 of the first half. Mia was also 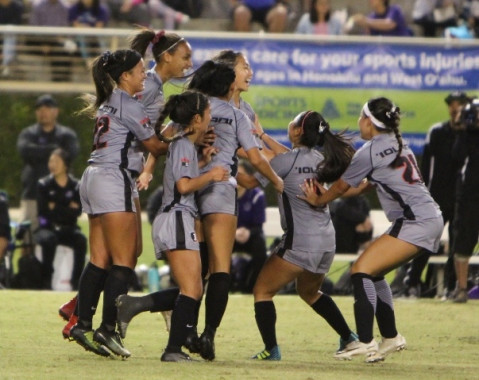